UV Pure Technologies has appointed Barry Bristow as Director of Operations. A co-founder of Coretec, Inc., he served as Chief Operating Officer and Vice President Manufacturing. Bristow will work out of the Toronto headquarters, reporting to President and CEO Richard VanSant.

Linda Evans has named Director of Human Resources for Pentair Water Fluid Solutions. She will oversee all human resources activities within the division’s four locations. Evans earned an MBA from Cardinal Stritch University and a BS degree from Iowa State University.

Atlantium has appointed George Gu to lead its recently opened Shanghai office. He will be in charge of marketing and sales in Shanghai/China. Gu previously served as District Manager with Ecolab Chemicals and as a technical supervisor at Shanghai Suntory Beverage. Gu holds a degree in chemical engineering from Shanghai University.

Nelsen Corporation has promoted Jim Yankovich to Account Representative, responsible for sales growth, maintaining existing sales and customer support and satisfaction. He has been with the firm for over 10 years, amassing knowledge that has made him a vital part of Nelsen’s success. Yankovich has proven to be highly motivated, moving from warehouse to counter sales to his current appointment.

Steve Draeger has joined the Pionetics®senior management team as CFO. The team will be responsible for executing the company’s product deployment strategy on an international level. Draeger was previously CFO at two major US law firms. Prior senior financial leadership positions with consumer products manufacturers included assignments in Africa, Asia, Europe, Latin America, North America and the Middle East. Draeger earned an MBA from Marquette University and a BA degree in finance from University of Wisconsin (Eau Claire).

P. Cory Willis was elected President by the National Swimming Pool Foundation® (NSPF®) Board of Directors to succeed Bill Kent. Willis has served as a member of the Board for six years, most recently as Treasurer and Chairman of the Scholarship and Grant Committees. He recently retired from the Alaska Department of Environmental Conservation where he oversaw the pool and spa program.

Keiser College conferred one of its highest honors on pool and spa industry veteran Connie Sue Centrella at its 2006 Faculty Convocation held in Ft. Lauderdale, Fla. She was presented with the Evelyn C. Keiser Teaching Excellence Award, Instructor of Distinction. Centrella, an industry veteran with over 40 years of experience, is Director of the Keiser College eCampus Aquatic Engineering Degree Program. (See her WC&P article in the November 2006 issue at www.wcponline.com)

Zenith International has appointed its fourth senior manager this year, naming Philip O’Brien as Finance Director and Company Secretary. He previously served as Finance Director of Nestlé Waters UK and brings acquisition, integration and information technology expertise to Zenith. O’Brien succeeds Anne Hall, a founder Director of the firm in 1991, who will remain as a non-executive Director.

AC Technology, a member of the Lenze Group, announces Eric Klein has joined the firm as North American Distribution Sales Manager responsible for building the relationship between factory and distribution channels. A graduate of Cornell University with a BS in Engineering, he spent 16 years with Toshiba, most recently as Northeast Regional Manager. 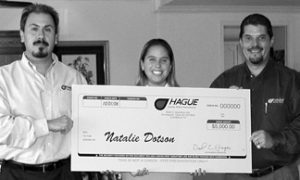 Natalie Dotson of Cushing, Okla. won $5,000 in the annual Hague Quality Water National Sweepstakes. Regional Manager Steve Leader and dealer Keith Mitchell teamed up to present the award. Each September, Hague’s accountant draws one lucky winner from a one-year pool of sweepstakes entrants. The winner may select one of three American-made grand prizes: a John Deere tractor, Polaris ATV or $5,000 in cash.

A memorial service was held December 20 in Las Vegas, Nev. for industry veteran Walter Casey. He died of a heart attack on November 30, 2006, at the age of 88 years. He and his wife Peggy had celebrated their 60th wedding anniversary two days earlier.

Casey, who began his career in 1954, founded Walt Casey Water Conditioning (later known as Walt Casey’s Culligan), one of the largest water treatment firms in Nevada. A well-known dealer of POU/POE systems, he also developed commercial applications for reverse osmosis, obtaining several patents for his devices.

Casey was a 1980 recipient of the Water Quality Association’s (WQA) Regents Award and a 1997 recipient of the WQA’s Hall of Fame award. He served on the Water Quality Research Foundation (WQRF) Board of Directors, the WQA Board of Directors, membership, marketing and nominating committee and reverse osmosis task force. He was also a founding board member of the Boys & Girls Club of Las Vegas and served as Vice Chairman of the Colorado River Commission.