Reducing the Risks of Pathogens in Groundwater:  The Groundwater Disinfection Rule, Part I

Ten years in the making, the Groundwater Disinfection Rule (GWDR) has finally been promulgated by the US Environmental Protection Agency (EPA) (November 8, 2006). Compliance with the rule is estimated to prevent more than 42,000 illnesses due to viral contaminants in municipal groundwater sources. This article is the first of two parts, describing the historical development, need and initiation of the Groundwater Disinfection Rule.

History in the making
The 1996 amendments to the Safe Drinking Water Act required the US EPA to address contaminated groundwater systems by requiring disinfection ‘as needed’. Later that year, development workshops forwarded the process of developing a National Primary Drinking Water Regulation to minimize the public’s exposure to human microbial pathogens in groundwater. By 1998, public meetings were being held aimed at presenting available data and the regulatory actions being considered. In 2000, the EPA proposed the Ground Water Rule (65 Federal Register 30194) in order to establish a multi-barrier approach to groundwater treatment. Since then, monitoring studies of municipal groundwater supplies continued and outbreaks occurred, justifying increased regulation of this water source, previously thought pristine.

Drinking from contaminated sources
Historically, groundwater supplies were thought to be free of pathogenic microbes due to the natural filtering ability of the subsurface environment and distance a microbe would have to travel in order to reach the groundwater aquifer. Contaminants that find their way into groundwater may originate due to lack of treatment, improper management of wastewater disposal, septic tank contamination, underground storage tank or landfill leaks, mismanagement of animal waste disposal, etc. Outbreak data provides clear evidence of groundwater vulnerability to microbial contamination. From 1991-2002, there were 183 documented outbreaks associated with drinking water and most (76 percent) of these outbreaks were from a groundwater source (Figure 1). 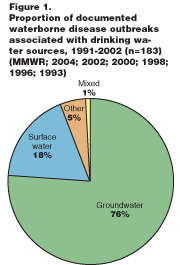 Increased surveillance using molecular and cultural detection methods has led to accumulated evidence of human enteric viruses and other potentially harmful microbes in groundwater. Molecular methods for virus detection do not determine viability and thus the public health significance of these results is not known, but the presence of viral RNA in groundwater suggests a potential for adverse health risks.

A survey of 321 samples from 29 US utility wells, collected over one year, detected human enteric viruses, including enterovirus, reovirus, norovirus and hepatitis A virus in 72 percent of the sites and 16 percent of the samples using RT-PCR (Fout et al., 2003). Similarly, 50 percent of samples from 48 midwest utility wells tested positive for human viruses (Borchardt et al., 2004). In the latter study, three samples were found positive for culturable hepatitis A virus. Another study of 50 private homeowner wells found enteric viruses in eight percent of the samples collected (Borchardt et al., 2003). In addition to human viruses, protozoan parasites have been documented in groundwater. Of 199 groundwater samples surveyed, five percent of vertical wells, 20 percent of springs, 50 percent of infiltration galleries and 45 percent of horizontal wells tested positive for Cryptosporidium oocysts, calling for a reevaluation of the notion that groundwater is inherently free of protozoan parasites (Hancock et al., 1998).

Prior to the newly promulgated Ground Water Rule (US EPA, 2006), utilities with a groundwater source were not required to disinfect the water supply and many small communities and individual homeowners continue to consume untreated groundwater. Several national surveys have documented evidence of viruses in groundwater

(Table 1). Therefore, the EPA’s Groundwater Disinfection Rule is expected to have a significant impact on waterborne disease outbreaks associated with untreated groundwater sources.

H. pylori has been found in biofilms of water distribution systems (Park et al., 2001) and individual groundwater wells. Epidemiological studies in Germany have linked infection in children with drinking untreated well water serving individual homes (Herbarth, 2001) as did a study in West Virginia linking contaminated homeowner wells (Elitsur et al., 1998). Studies of groundwater quality have implicated an association with septic systems and disease. Borchardt et al., (2003) found that viral diarrhea in children from 14 contiguous ZIP codes in Wisconsin positively correlated with septic tank density. Water holding tanks and bacterial diarrhea were also positively correlated. Raina et al., (1999) showed E. coli in well water was correlated to diarrhea in rural families. The closer the septic system was in proximity to the drinking water well, the greater the incidence of disease. Overall, 46 percent of wells were contaminated if the septic system was within 20 meters.

The rule applies to more than 147,000 public water systems and over 100,000 consumers utilizing a groundwater source. The rule requires that sanitary surveys are conducted by December 31, 2012 for most community water systems (CWSs) and 2014 by CWSs with outstanding performance and for all non-community water systems to help identify deficiencies that may lead to impaired water quality. Source water monitoring for indicator microbes and corrective actions for systems with significant deficiencies or source water fecal contamination and compliance monitoring are further required.

A public still unprotected
Although most illnesses related to waterborne enteric microbes result in self-limiting gastrointestinal diseases, like vomiting and diarrhea, this is not the case for all. Infections in sensitive subpopulations, such as the elderly, young children and persons with compromised immune systems, may be chronic, debilitating and even deadly. While the EPA estimates that the Ground Water Rule will reduce waterborne viral illnesses by approximately 42,000 cases each year (23 percent reduction from the current baseline estimate), many more waterborne exposures continue to occur. Private well water supplies are a targeted concern. In addition, as with all municipally treated water, there is a real potential for contamination post-treatment and monitoring, either in the distribution system or in premise plumbing (pipes in the home or building beyond the EPA’s responsibility). Many experts believe that additional barriers of protection at the point of use are inevitable for improved water treatment.