With nearly 200 hundred members, the Eastern Water Quality Association (EWQA) ranks as one of the largest of the regional groups. But since their territory stretches from Maine down through Virginia, it’s a rare gathering that finds them all in one place—this year, that place was Pikesville, Maryland.

EWQA’s Annual Conference and Trade Show at the Hilton Hotel was a resounding success. Even the weather cooperated, with record-setting warmth and sunshine throughout. Carl Davidson presented the day-long preconference workshop on sales survival solutions while across town, golfers teed off under sunny skies.

The Board meeting was the first chance many had to meet the organiza-tion’s new Executive Administrator, Jane Cain of Cain Associates. She and her staff were already known to many as a result of running the welldrillers’ Southern Jubilee each year in North Carolina. “I see a great deal of potential for growth in EWQA and look forward to our future together,” Cain said.

Membership dues were raised 24 percent by the Board, the first such increase in a number of years and a reflection of the rise in operating costs for the association. Manufacturers will now pay $230 per year; dealers $125. Those memberships have also been defined as including two individuals per company—a change from the ‘unlimited’ approach previously assumed. Now, additional company members will pay $25 each. The Board has created a new position, Board Member Emeritus, as a means of tapping into the considerable knowledge and expertise of those who have long served the organization. Rather than lose that wealth of experience, these individuals will continue to aid EWQA. Carl Jollee and Dave Wilson are the first to move into these spots. GE’s Kathy Srygly is now Secretary/Treasurer, taking her place in the line of succession through chairs.

Traditionally, new Board members are elected at this meeting; however, it was felt that members had not had enough notice to make their choices timely; therefore the nominations period was extended throughout October by unanimous vote. The Board will meet in November in Pennsylvania and vote at that time. Business accomplished, the meeting adjourned and all gathered at a welcome reception in the hotel’s ballroom. 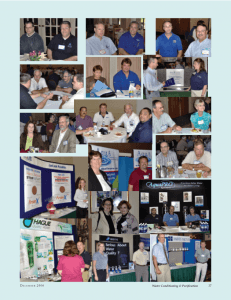 The educational offerings at this conference were exceptional and covered everything from ‘Running a Profitable Service Department’ (Gary Battenberg, Technical Director, Hague Quality Water International) to ‘Filtration Sizing and Application’ (Randy Eddinger, Suburban Water Technology)—with lots of offerings in between. Commercial applications and problem water were looked at by WQA Board Member Richard Mest of Master Water Conditioning Corporation and Water-Right’s National Sales Manager Mike Hamberger. Blue Marsh Labs’ Sales & Marketing Manager Marianne Metzger spoke on water analysis essential to water treatment, while the State of Delaware’s regulations governing drinking water were outlined and explained by Edward Hallock, Program Manager of the Division of Public Health (he also wore the best tie at the gathering, bar none!).

A delightful buffet dinner banquet was highlighted by Jane Cain as keynote speaker and by the presentation of the Stan Zarkowski cup to the event’s top golfer. The winner on the green was Frank Consonni, Eastern Sales Manager of G.A. Murdock, Inc.—and the lovely crystal trophy will be gracing his office as a permanent reminder of his triumph.

The crowd thanked President Mike Urbans for a successful year and promised their support of new President Jon Davis of Commonwealth H20 Blue Ridge. All seemed sure that the man in shorts will have an exciting year ahead!