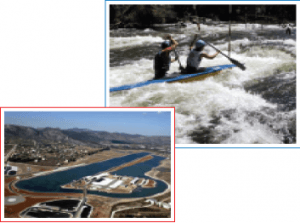 In 1972, the Canoe/Kayak Whitewater Slalom debuted at the Munich Olympics. A sport born in the wilderness, Olympic engineers and venue planners found the logistics of the event to be a challenge, often requiring staging away from the host city to a natural course. In the 1996 Atlanta games, the whitewater canoeing/kayaking competition took place nearly two hours away, in Tennessee. However, the event emerged from the wilderness and into the modern world, aided by the development of man-made courses, for the Barcelona, Sydney and Athens Games.

This trend will continue at the 2008 Summer Olympics in Beijing China, which will also employ a man-made course for the canoeing and kayaking events. The course will uphold the environmental theme of the 2008 Games and it promises to balance extensive fluid technology and environmental savvy. But that is not all. Much like Athens in 2004, Beijing will employ fluid technology beyond the sports area to include a major infrastructure overhaul that both prepares the city for the games and enhances water management for the future.

Athens
Built on the site of the former Hellinikon Airport in Athens, Greece, as part of the Hellinko Olympic Complex, the $35 million white-water project utilized an adjacent, man-made lake to provide water for the course. Eighty thousand cubic meters of salt water from the Mediterranean filled the lake. The course utilized six concealed pumps, each with a maximum pumping capacity of 18 cubic meters per second. Together, the pumps are capable of supplying 5,000 gallons of water per second through the 500-meter course. During the games, five pumps were in use, with the sixth pump waiting as a standby. An on-site electrical power station provided power to the pumps and (rated at 5MW) had enough power to supply electricity to 3,500 families as well.

One of the challenges faced in the development of the course was Greece’s climate, as extreme temperature would cause constant evaporation in the lake providing the course’s water. However, utilizing the Mediterranean as a renewable source allowed the course to maintain continuous water without exploiting the area’s potable supply. The use of salt water had implications for the athletes though, as parts of the course proved to be so salty that the American team dubbed a particularly aggressive section of the course Margaritaville.

Beyond the sports, the officials for the 2004 Olympics had to contend with infrastructure issues in preparation for the games. In addition to its four million citizens, nearly 300,000 spectators and athletes called Athens home during the Olympic Games and the city required a substantial upgrade to comply with the EU Urban Wastewater Treatment Directive, a necessity that Greece had used as an argument in their Olympic bid.

Athen’s main wastewater facility is located on the Island of Psyttalia, a little over a mile south of Athens in the Saronic Gulf. It is one of the largest wastewater treatment plants in Europe. During initial construction, the majority of the island was re-engineered to accommodate the plant with an archeological site claiming a small portion. Before the plant, most of the city’s sewage and industrial effluent returned to the sea without treatment. But after 1994, the plant provided primary wastewater treatment for the majority of Athens’ wastewater, including screening, grit removal, primary sedimentation, anaerobic digestion and mechanical de-watering for sludge. Most of the waste was gravity fed to a massive pump station on the shore, where nine screw pumps transported it to the island.

To upgrade the facility, almost 130 pumps were installed to transport wastewater to the island and through different treatment processes. The technology included propeller pumps; pumps for circulation within bioreactor tanks; banana mixers used in bioreactor zones; and mixers for degassing the bioreactor outlet.

The Olympic overhaul became the largest order in the history of the manufacturer’s Greek subsidiary. Today, the wastewater plant produces approximately 880 tons of de-watered sludge annually, in addition to processing a million cubic meters every day, a capacity that translates to 12 cubic meters of waste each second.

Beijing
Although Athens set an environmental standard for future Olympics, the 2008 games in Beijing will be the Green Olympics. Even the symbol of the game, an icon incorporating trees and people, stays true to the theme. China has already begun Olympics-related environmental initiatives and it has committed itself to upholding the sustainability themes of the games through guidelines for venues, environmental assessment reports and green construction. Chinese officials are taking strides to maintain the environmental standard in the design and development of another man-made, white-water canoe/kayaking course. The Beijing course will be similar to the 500-meter Athens construction, including six pumps and control panels that have the capacity to push up to 5,000 gallons of water per second. It promises to be one of the most advanced and comprehensive courses in recent Olympic Games, including moveable obstacles to simulate white-water rapids and waterfalls, as well as incorporating environmentally friendly design and energy efficiency. Currently under construction, the course will be completed in March of 2007.

In addition to sustainability initiatives relating directly to Olympic events, China has extended the theme to include the development of environmental standards that improve the current state of Beijing as well as the outlook for the city’s future. It includes the greening and beautifying of Beijing, the communication of environmental awareness through educational programs and the improvement of air quality through the prevention and treatment of transportation pollution.

The second phase of the Qinghe Sewage Treatment Factory, completed in 2004, increased treatment capacity for the urban area to 400,000 cubic meters per day. With a total drainage area of almost 160 square kilometers, this system provides clean water to supplement river flow, irrigation and road clean-up to benefit approximately 814,000 people.

Much as the Olympics bring the world together in sport, water should be a similar, common link between all nations. At the opening of this year’s World Water Week in Stockholm, Sweden, scientists called the world to action, urging responsible water use and dramatic improvements in water management. Studies from the International Water Management Institute indicate that water shortages currently affect a third of the world’s population. Access to clean water is an essential human right and we need solutions to current water issues to ensure the future of this basic resource.

Steps are needed to avert a world water crisis and the Olympic Games provides the perfect venue to bring the world together and raise awareness of these issues through innovative applications of sustainable technology. As the world prepares for the next Summer Olympic Games in Beijing, consider the general trend towards returning to nature. The kayaking courses of Athens and Beijing are symbols of progress towards addressing the much larger issue of sustainability and water stewardship and although the Olympic canoeing and kayaking events have come out of the woods, the Games have never been greener.

About the author
Per-Ing Bigersson first joined Flygt in 1979 as a Project Manager. He left in 1984 to work for Tetra Pak AB Lund where he successfully completed a number of diverse assignments in Sweden, the US and Switzerland. Bigersson also held managing director positions at Staglings AB and Bofors SA Marine AB. He returned to Flygt in 2000 as the Managing Director of ITT Flygt China and has served as President of ITT Flygt AB since 2003. Bigersson holds a masters degree in mechanical engineering from the Lund Institute of Technology.

About the company
ITT Flygt is a leading global manufacturer and supplier of submersible pumps, mixers and aeration systems for water and wastewater plants, irrigation, construction projects, mines and the process industry. The firm is a wholly owned subsidiary of ITT Corporation. Flygt has 37 wholly or partly owned sales companies located in more than 130 countries that supply advanced technology products and services in key markets including. For more information, visit the website at www.flygt.com