As related to WC&P Staff

Incorporated in 1966, Intermountain Water has expanded its efforts to encompass all aspects of water quality and treatment. Greg Reyneke, a member of the management team, gave WC&P an exclusive look at the history and vision that have propelled this Utah company to success.

The family is the company
Albert Rowley and his partners started the business in the early 1950s and it has remained in the Rowley family for more than four decades. He still consults for the company occasionally, serving as a wellspring of knowledge and experience. His son Robert is the current President. He started at Intermountain as a pre-teen, engaging in every facet of the trade, transitioning from installation to sales, to management and finally outright ownership of the company and its subsidiaries. Today, grandson Rogan is part of the management team. He followed his father’s example, starting at the bottom and working his way up. Rogan hopes his two-year old daughter Brooklyn will continue one day with the family business. 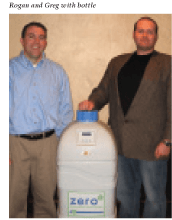 The family’s more interesting names have a history of their own. Rogan was named after his father’s youthful best friend, a most remarkable man who could achieve anything, just what Robert wanted for his son. He thought the name would inspire his son in ways nothing else could. Rogan chose his daughter’s name based on his first trip to New York, his Latter Day Saints mission, where he was stunned and amazed by the diversity of cultures and the vitality of the community.

Reyneke grew up in sub-Saharan Africa, an experience that fostered a deep understanding of the importance of clean water. With a background in electronic engineering, he was hired to help bring the Rowley dream to fruition: creating a water softener that didn’t make water feel slimy or taste bad. Reyneke realized that he was in a very special place after being with the firm only a few short months. He was immersed in every aspect of the business, from driver and technician to sales and enterprise management. Today, he is credited as the provider of intellectual and technical impetus for the organization. 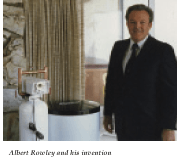 Many employees are children or close relatives of Robert Rowley. So many family members on staff requires a unique management style to diminish fears of nepotism. All employees are handpicked via very stringent hiring protocols, including criminal background checks, drug testing and signing non-disclosure agreements (even for family members). The company proudly notes that every in-house salesperson or technician is required to complete over 1,000 hours of training in water treatment technology and customer service before being allowed to work with consumers. Key technical employees are required to earn (at the very least) WQA CWS-I status and are encouraged to attain additional education and certifications.

From assembly to manufacturing
When the company was founded, everyone in Utah except Culligan assembled their own equipment. After operating successfully as an assembler, Inter-mountain’s first foray into manufacturing happened when Albert Rowley helped develop the Erie 541-D9 control valve in partnership with Erie, when it was still in Milwaukee, Wis. In the early 1980s, Intermountain co-developed an upflow brining seven-cycle water softener control valve (with Erie) and included top dressing with anion media in the system to help address the ‘slimy soft water’ syndrome. This product was marketed as the Spectrum-360 Filtration System and over 500,000 units were sold during the product’s life cycle. 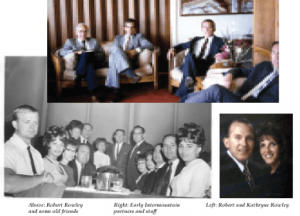 One of the larger equipment manufacturers in the western states, the company focused on making specialty equipment and truly unique products for its resellers and consumers. Intermountain developed intimate relationships with resin manufacturers and control valve makers and actively leveraged its intellectual assets with a full-time engineering department, making R&D’s budget larger than advertising’s. As water quality worsened in the western states due to drought conditions and explosive population growth, the company realized that traditional water softeners were not always up to the task, often failing prematurely and suffering accelerated attrition damage to the resin. Intermountain began experimenting with various resin cleaners and alternative resins, including nuclear grade and weak acid cation. Reyneke notes that WC&P Tech Reviewer Chubb Michaud at Systematix played an integral part in helping the firm source the proprietary ion exchange media to suit its purposes.

The global market
Intermountain (and its various operating divisions) is responsible for numerous advancements in the field, most importantly Evertech, Pur-Gard and PuraFeel technologies. Its proudest creation is the Home Empowered Water System, designed by Intermountain and mass-produced by Aquion partners’ ProSystems division for national and international distribution. The system is touted as having all the benefits of softened and conditioned water without the slimy feel or objectionable taste. While Utah is the company’s backyard, its innovations are sold wherever they are needed. The most exciting projects include designing desalination plants for use in the Indian Ocean, removing bacteria from water in Uganda and providing safe water in Saudi Arabia.

The company is recognized as an innovative pioneer that licenses its technologies worldwide and it maintains its lead through innovative development. It leverages its in-house staff to design system hardware configurations, electronics and software in conjunction with outsourced assets, often utilizing sub-assemblies from Clack, Erie, Fleck, GE and others. The finished product, however, is always an Intermountain original.

The firm’s annual multipoint inspection programs, provided by in-house service teams and independent dealers, are designed to educate consumers about the importance of relationship management and maintenance. (The concept has gained credence with the industry through imitation; many competitors and affiliates have adopted the programs.) Intermountain deploys a satellite-tracked fleet to ensure absolute quality control and provides every level of service, from residential filter changes to industrial deionization and reverse osmosis.

Consolidation brings new challenges
The company has observed the pains of many consolidated companies and franchises that have floundered; merely purchasing the assets of a company is not enough to succeed. Additionally, ‘big box’ retailers continue to make inroads into the industry. “One day, large retailers and consolidators will realize that although we design and manufacture commodity appliances, this is not an appliance industry,” predicted Reyneke.

Reyneke believes that water treatment is a very personal business and every client’s situation is different. Offering treatment options without the necessary expertise to install and maintain the systems is a recipe for disaster. “We rely heavily on individual skills and personalities to provide the best customer experience. As more whole house systems are sold through home improvement centers that lack qualified employees, more consumers will be turning to water specialists to fix the mistakes of inexperienced, underpaid store clerks.”

oft water is a highly competitive field with many clamoring voices that are competing for the attention of prospective customers. Water utility companies may also eventually try to offer home POU/POE equipment. Intelligently managing customer relationships allows the company to move closer to its three-fold operational objective of giving clients better water, creating a lasting client relationship and making some measure of profit. “It’s the industry’s responsibility to maintain the highest standards of ethics in marketing, sales and service. We know that the best way to keep a customer is to put their interests first, provide great value for money and always exceed their expectations. We want to promote the acceptance of softened, conditioned or filtered water as a necessity instead of a luxury in every home in America.”