What’s the best way to see out half a century of serving the water industry? According to the members of PWQA, convening on the most illustrious ocean liner of its day, the Queen Mary!

The 49th Annual Convention and Western States Trade Show began on October 24. While WQA’s Joe Harrison taught his famous ‘Fundamentals’ course in an art deco classroom off the promenade deck, members of the Board of Directors convened beneath the mural-covered walls of the conference room next door. The Queen Mary, jewel of her day, made for interesting settings throughout the four-day gathering and a photo-opportunity around every corner. Of course, at nearly half a mile in length, it also meant attendees got lots of exercise!

The golf tournament saw nearly 40 duffers on the course from every facet of the industry competing under sunny Long Beach skies at the Skylinks Golf Course. WQA President Neil Desmond (Pentair) was keynote speaker at the annual meeting, where he presented an overview of WQA’s activities. PWQA’s new lobbyist, Ken Maddox (Maddox Associates) introduced himself and his firm’s activities to the audience, many of whom had not yet made his acquaintance. Maddox coined the phrase, ‘water appliances’ in his speech, which quickly spread like wildfire. Might this term be a more consumer-friendly way to present our services and products? 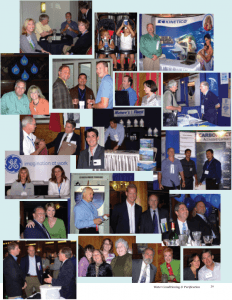 A welcome reception followed, held in a glamorous lounge overlooking the stern of the ship and the ocean beyond. The setting sun cast a delightful glow as folks greeted old acquaintances and made new business connections. Travelling the furthest to the conference was Jonny Secombe of Water King—all the way from the UK.

Thursday began early, as PWQA past presidents met for their traditional breakfast and educational programs offering CEUs for those on certification tracks were presented beginning at eight a.m. Topics ranged from softeners and septic systems to arsenic to health insurance cost containment strategies—and everything in between.

The trade show was a sold-out success. Programs were scheduled so that there were no conflicts between classroom offerings and the show. The result was hundreds of participants on the show floor each day, a boon for exhibitors. 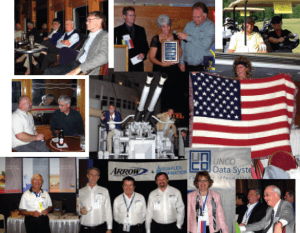 Thursday evening, the annual awards banquet and PAC auction brought everyone together in one of the ship’s many grand salons. Past President Ron Reuf was given the group’s Lifetime Achievement Award for his decades of service in every possible capacity. No further proof of the merit of that award was needed than the appearance of a newly remodeled Vanna, John Pomeroy’s (Rayne of Covina) beloved auction assistant. This duo once again raised funds for PWQA’s Political Action Committee (PAC) by getting diners to bid their all for donated items ranging from curios to cruises. WC&P was in the winners’ circle twice! First the magazine as a whole received the Special Service Award; next, the Marino Pomares Award went to Karen Smith.

Friday many attendees advanced their standings through WQA certification exams, while others met to ponder California’s hottest water industry issue: salinity. PWQA members (and Past Presidents) Mark Howlett (Culligan North Los Angeles), Chris Layton (Culligan NW) and Tracy Strahl (Southbay Salt Works) presented firsthand testimony on the topic in the early morning session. Then Inland Empire Utility Authority’s Executive Manager of Policy Development Martha Davis addressed participants on an overview of their ‘Pinch the Salt’ program. This was followed by a special session for dealers participating in the next phase of that program.

As the exhibitors tore down their booths, they agreed it had been the best show ever and the attendance numbers bear out that impression. “PWQA went through some lean years, but we’ve regrouped, rebuilt and recruited successfully. With hundreds of people now attending our events, we’re ending half a century stronger than ever!” Heckman summed up, adding, “See you at Pechanga—same time next year!”