By Stephan B. Sears

Introduction
Water can no longer be taken for granted even though we live on a planet surrounded by this precious resource. Of the world’s 1.4 billion cubic kilometers. (0.34 billion cubic miles) of water, only 2.5 percent is fresh, 69 percent of which is locked in polar caps and mountain glaciers or stored in underground aquifers too deep to tap under current and foreseeable technology.1

On a case-by-case basis, some arid countries in the Middle East record only a few millimeters of precipitation each year. The Kingdom of Saudi Arabia relies on existing groundwater to meet 75 percent of its water needs.3 These underground reserves, filled thousands of years ago, have negligible annual recharge. In the last century, California (a semi-arid state) has experienced rapid urban growth and agricultural development. All existing freshwater sources have been tapped and annual recharge is severely limited.

Today, the greatest overriding concerns about water resources are the cost of obtaining additional stores or finding other sources. In real life terms, we must look to what hydrologists refer to as endogenous, or internal, resources. Looking to and learning from nature can be an invaluable help in the search for answers.

How nature does it
The hydrologic cycle is driven by the sun and that energy is free. We must consider how much energy is required and its cost in duplicating nature’s process. Distillation is well-known; however, it has traditionally been seen as consuming large amounts of energy.

Along with energy consumption, capital cost must be considered. For the home or business POUs where relatively small amounts of water are needed (five to 15 gallons per day), the operating cost is probably 20 to 25 cents per gallon. There are a host of inexpensive single-stage distillers currently on the market. Their small footprint (about the size of a toaster), quality output and consistent performance make them strong sellers. 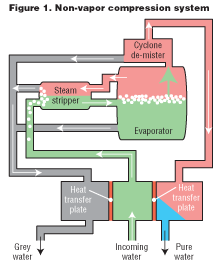 Methods and processes
Many water treatment technologies require constant monitoring and maintenance, including parts replacement and cleaning. Single-effect distillers are quite simple: the boiling chamber is a pot with an electric heater and a condensing tube. Condensing is generally done by water or air cooling. The systems using cooling water carry away the heat, thereby wasting some of the water. The air-cooled units put the heat out into the room with little or no water waste.

When more water is desired, the energy required to produce it becomes the most important factor. Consumers and businesses can’t afford to pay 25 cents a gallon for large quantities. Fortunately, there are higher efficiency distillers for larger requirements.

Very large systems are designed and built to meet specific requirements to increase efficiency. In multi-stage or multi-effect distillation, the steam generated goes to a series of boiler condenser chambers. Each successive boiler stage is held to a lower absolute pressure and lower boiling temperature and the heat energy is reused. The efficiency factor is dependent upon the number of stages (i.e., two stages use one-half the energy; four stages use one-quarter the energy, etc.). To distill hundreds of gallons of water, two- to six-stage distillers are used. Multimillion-gallon distillers will use from 16 to 24 stages. To make up for increased energy requirements, there are some units used in several Arab countries that are heated with oil and gas.

Vapor compression distillation
There is another, more efficient distillation process called vapor compression distillation. The boiler and condenser recycle the heat necessary to turn the incoming water to steam. It is possible to accomplish the same result (heat one gallon of water, evaporate, condense and cool it back down to within one degree of the original feed water) using an amazingly low energy consumption rate of 10 to 15 watt-hours. To understand the difference in recycling energy, this system has a coefficient of performance (COP) of 200-to-one, the equivalent of a 200-stage multi-effect distiller. This is the same as reusing the energy 200 times or using 1/200th of the energy needed to distill one gallon of water.

The system incorporates several well-known processes to duplicate nature: evaporation, condensation, steam stripping and cyclone demisting. During the steam-stripping process, feed water is heated in the exchanger. The steam is run counterflow to the incoming water to strip off all gases and volatile liquids. Cyclone demisting funnels the steam into a circular chamber where it is spun at approximately 40 miles per hour. This process centrifuges the water droplets to the outside where they drain back into the boiler and only the dry steam is transported and condensed. It is the combination of these technologies that allows virtually any water to be purified onsite for less cost than pumping water from other sources. The process will purify feed water with a very broad range of contaminants, including viruses and bacteria, minerals, gases, radiation and salts.

Vapor compression distillation does not rely on filters or chemicals to clean the water. Components are made of high-grade stainless steel and the pure, fresh water is separated from the impure feed water by solid stainless steel barriers. The highest pressure is on the pure water side to provide leak protection; the water can only go from the high pressure or pure water side to the low pressure or impure side. A leak would result in less, but not impure, product water. This is a true fail-safe system (see Figure 2). 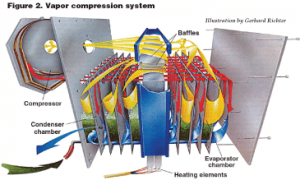 The technology reverses what is normally seen in nature’s process. Water is heated to its boiling point and the steam is cooled to make it condense. The problem is how to recycle the heat generated in the process. Pressure and temperature are interchangeable in the sense that as the pressure decreases, water boils at a lower temperature. Conversely, as pressure increases, steam will condense at a higher temperature. A compressor is used to draw steam from the boiler side creating a lower pressure and allowing water to boil at a lower temperature. The steam passes into and through the compressor and is blown into the condensing chamber, creating higher pressure. The steam condenses at a higher temperature because it is under higher pressure.

Continuous flow process
The system chambers are separated by thin plates, creating alternating chambers. A boiler is on one side and a condenser is on the other. In order to condense, the steam must release its latent heat, which passes through the plate and into the lower-pressure water on the other side; that water is turned to steam. As pressurized steam from the compressor touches the (relatively) colder plate, it condenses. This allows for recycling of almost all the energy required, though some loss occurs. The compressor does the work of continually supplying heat/energy, making up for any lost during the condenser process.

The incoming feed water flows through a three-liquid counter-flow heat exchanger that heats the incoming water to within one degree of boiling. The exchanger is made of stacked plates with no moving parts (little friction, less wear). It has a very long life expectancy and is very inexpensive to manufacture. The heated water passes through a counter-flow steam stripper that removes gases and odors. It enters the boiling chamber where part of the water is turned to gas. The remaining water is waste that carries away impurities in the feed water. In the boiling chamber, the rising gases are centrifuged to spin off any droplets and prohibit any carry over. Only dry gas is pulled into the compressor and blown into the condensing chamber.

Conclusion
Vapor compression distillation is a cost-effective, energy efficient means of providing potable water in resource-poor areas by expanding on existing technologies and designs. Additional value is realized in lower capital expenditures and manufacturing costs. By recycling within the distillation process, lower energy costs and higher product output are achieved.

About the author
Stephan B. Sears, an entrepreneur and successful inventor for over 40 years, is currently a principle owner and technical advisor for California-based ForeverWater. In 1969 he established Silonics, Corp. to market his globally patented drop-on-demand ink jet printing technology. Sears has a degree in physics from Stanford University (1963) and holds several patents for water purification technologies.

About the company
ForeverWater has developed a patented technology that guarantees 100 percent safe and delicious water affordably, continuously and without daily maintenance of any kind. Its mission is to provide affordable pure water to the world, regardless of the source. Microbiological testing for California certification proved that no bacteria or viruses were detectable in the product water. The firm applies sustainable business practices through local production, product design, customer focus and education while responsibly maintaining the planet.

About the product
Vapor distillation systems are made of high-grade stainless steel, with few moving parts except the compressor; there are no membranes to degrade or filters to refill. The continuous flow process uses softened water to prevent the buildup of contaminants and cleaning deposits (that accumulate over time) and carries waste out of the unit. The result is a system that (using distillation, steam striping and cyclone demisting) generates potable water of generally less than one ppm impurities at an affordable cost.