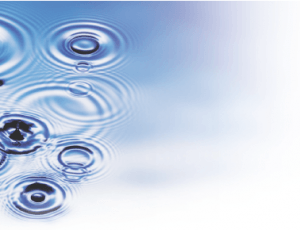 Recent outbreaks of recreational water illnesses (RWI) in the US and Canada are disturbing and bring to light the need for facility managers to investigate regenerating chlorination systems, which do not require supplemental sanitizers or oxidizers.

Chlorine generating systems (CGS) were first introduced in the late 1970s for swimming pools and spas when the technology was unknown to the swimming pool industry. This same process, invented in the 1960s, was widely used for wastewater treatment and industrial applications. Since the late 1990s, there has been a major shift in acceptance and now, CGS have gained worldwide approval. Today, they are recognized as the best methodology for generating chlorine sanitizer for both private and public pools and spas.

Process
Salt is added to the pool or spa to establish a 3,000 ppm concentration. This is equal to only seven percent of the salinity level in seawater. The pool user cannot taste the salt at 3,000 ppm as this level is below the normal taste threshold; it is also less than the human body’s salt concentration of 4,000 ppm. One of the best features of this electrolytic process is that the salt continuously recycles itself. Adding salt is infrequent, normally in outdoor pools about two or three times a year; indoor pools require less frequent additions. Indoor air quality immediately improves when the salt system is utilized.

An electrolytic cell (or cells) is installed in the recirculating system after the filter and heater. As the filtered water flows through the cell, a small amount of direct current (DC) is applied to the cell blades, which under electrolysis, produce pure chlorine and sodium hypochlorite (liquid chlorine). As the water passes through the cell, the electrolytic process causes break-point chlorination, destroying bacteria and chloramines which are the source of odor, red eyes and most of the negative reactions blamed on chlorine. After oxidation occurs in the pool or spa, the sodium hypochlorite reverts back to salt in the pool. The process repeats itself over and over based on the chlorine demand in the pool or spa. 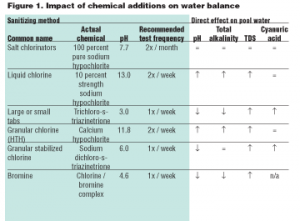 The major benefit to the pool operator is that CGS provide a safe method of sanitization. There is no need for bulky, heavy containers of powdered chlorine or tablets. There is no possibility of a chlorine leak or inexperienced personnel mixing chlorine with other dangerous chemicals. Erosion feeders, which have been the cause of many accidents, are eliminated from this process. Liability is one of the major factors in swimming pool operation and the installation of a safer salt generator chlorination system eliminates this risk exposure.

Very few chemical adjustments are necessary. Organic sanitizers such as tri-chlor have a pH range of 2.8 to 3.5, which inherently lower the pH of the pool water, requiring the addition of sodium carbonate to raise the pH. The chlorine generator produces a near neutral pH.

The patrons of the pool facility will enjoy a feeling of soft, silky water with no red eyes, itchy skin, faded swimwear or chlorine smell. The comfort level of the users is enhanced as there is no chlorine smell in indoor installations.

Another benefit is that the equipment installation is easy and does not take up much room in the mechanical area. There are only four components to the system: the power supply, the electrolytic cell, flow protection device and of course, the salt, which is dissolved in the pool water.

The systems today are now enhanced with digital readouts, which allow the operator to precisely manage the pool water quality. The pool manager has confidence, knowing that there is continuous chlorine sanitation (and localized super-chlorination in the cell) occurring, thus eliminating potential occurrences of poor water quality and exposure to diseases.

The American Heritage Pool, located in Plantation, Florida, contains 306,702 gallons of water. It is an outdoor installation with full sun and no shade. There are approximately 170 bathers per day. The CGS was installed eight years ago. The temperature is maintained at 85°F (29°C) year round and the filter runs 24/7. The management feels that their decision to convert to chlorine generation was economical and safer than sodium hypo. In addition, they decreased their liability exposures, as no hazardous chemical transfers are necessary. CGS eliminated tank truck deliveries, hoses transfers of chemicals and potential leakages and other accidents.

Author’s note
Salt chlorine generators make the same exact type of chlorine as liquid chlorine fed via a dosing system; that is, liquid sodium hypochlorite. So the net effect on sanitizing and residual requirements is the same; what is different is the impact of the process on the other water chemistry factors, as noted in the chart. Public pool codes require the chlorine residual, which is the same for both products, so the salt systems meet the needs of the public pool codes. The reason that the liquid chlorine produced this way has a different effect has to do with fact that it is made differently than mass produced liquid chlorine.  Mass produced liquid chlorine has a very high pH due to how it is made. Liquid chlorine made through the electrolytic process on site (in the pool piping system) has a pH around 7.7, so it is much less distruptive to the balance of the pH of the pool. Mass produced liquid chlorine carries a lot of by products of the manufacturing process, making the pH about 13.0. This very high alkaline condition dramatically increases the need for pH adjustment.

Bill Kent is a graduate of University of Cincinnati with a BS in physics and an MBA in economics at Xavier University, Cincinnati. Since 1972, he has served as President of ‘Team Horner’, a group of companies focused on various functions within the swimming pool and spa business worldwide. Team Horner consists of HornerXpress, a swimming pool distribution network, AutoPilot Chlorine Systems, AquaCal Heat Pumps, Lo-Chlor Chemicals, Horner Financial Services and Horner Engineering Consultants. Kent is Past President of the National Spa & Pool Institute (NSPI) (1996) and has served on numerous boards and committees within the swimming pool industry over the past 30 years. He is past President of the National Swimming Pool Foundation® (NSPF®), which is widely known and respected for its Certified Pool-Spa Operator® (CPO®) training program for public pool and spa operators. He can be reached via email at bkent@teamhorner.com.