E. coli in Spinach—Is There a Waterborne Link? 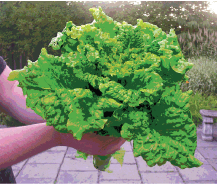 Disease-causing microbes are in the news—again—and this time linked to produce. As we go to press, there have been 192 illnesses, 98 hospitalizations, one confirmed and two suspected deaths identified in 26 states. The culprit is Escherichia coli O157:H7 contamination of spinach. Although spinach is the vehicle of disease transmission, the source of the contamination is currently unknown. Because water is a primary component in the growth, harvesting and production of produce, it cannot be overlooked as a potential source of the outbreak, raising questions as to what controls might be necessary in terms of water quality in the agricultural setting.

A complex germ
There are many different types of E. coli; many are commonly present in the environment and generally not harmful. Found in the feces of humans and warm-blooded animals, they serve as useful indicators of fecal contamination in drinking water sources. The presence of E. coli in drinking water indicates that the water is subject to fecal contamination and that other fecally-transmitted microbes could also be present. On the other hand, several strains of E. coli are capable of causing mild to serious and sometimes fatal, disease. These are known as enterotoxigenic (ETEC), enteropathogenic (EPEC), or enterohemorrhagic (EHEC) strains. EHEC strains of E. coli cause gastroenteritis with profuse watery diarrhea accompanied by nausea, abdominal cramps and vomiting. This bacterium is a common cause of travelers’ diarrhea. EPEC strains are similar to ETEC isolates but contain toxins that are capable of initiating severe disease. EHEC E. coli almost always belong to the single serological type 0157:H7. This strain generates a potent group of toxins that produce bloody diarrhea which can be fatal—especially for children and the elderly. E. coli O157:H7 is the strain responsible for the recent outbreaks in California-grown spinach but the source of the E. coli itself remains a mystery. 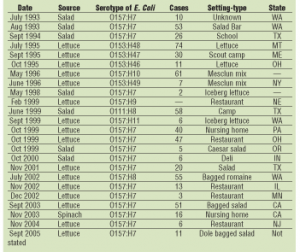 Signs of disease
Early symptoms of the potentially fatal E. coli O157:H7 infection are very similar to the flu. Thus diagnosis of the condition may be delayed allowing symptoms to worsen. Many people infected will experience intense cramps and bloody diarrhea four to 10 days after exposure. Although most people recover without antibiotics or other specific treatment in five to 10 days, in a portion of the population, the organism may destroy red blood cells and interfere with kidney function, a condition known as haemolytic uremic syndrome (HUS), possibly leading to organ failure and death.

HUS is a life-threatening condition usually treated in an intensive care unit. Blood transfusions and kidney dialysis are often required. With intensive care, the death rate is between three and five percent. About one-third of persons with HUS have abnormal kidney function many years later and may require long-term dialysis. Another eight percent of persons with HUS have other lifelong complications, such as high blood pressure, seizures, blindness, paralysis and limited bowel function. In the current spinach outbreak, an overall 16 percent (30) of the documented cases resulted in advancement to HUS. Children suffered worse than all age groups combined, with an HUS rate of 28 percent.

Infection with E. coli O157:H7 is diagnosed by detecting the bacterium in the stool. Persons with mild symptomology rarely seek medical attention and thus researchers believe many more cases of E. coli O157:H7 are undocumented. Clinical laboratories do not routinely culture stool for E. coli O157:H7, unless the doctor or patient specifically request the analysis. All persons who suddenly have diarrhea with the presence of blood should have their stool tested for E. coli O157:H7.

The ability to immunize against this disease is particularly important, because the infection does not respond well to antibiotics; indeed it is thought that antibiotics may actually increase the incidence of HUS by causing the bacteria to burst and release a toxin into the bloodstream. Scientists working on a vaccine are currently conducting clinical trials to determine effectiveness. Others have suggested that cattle, the primary source of E. coli O157:H7 in the environment, be given the vaccine as a means of control.

Why California? Why spinach?
Foodborne illness in the US is responsible for an estimated 76 million cases of disease, 323,000 hospitalizations and 5,000 deaths per year. Illness from E. coli O157:H7 has been caused by a variety of foods including undercooked ground beef, roast beef, raw milk, improperly processed cider, contaminated water, mayonnaise, cantaloupes, vegetables (sprouts, lettuce) and salami. Outbreaks have also started from cross-contamination (contamination from the hands of an infected individual or from contaminated utensils, countertops, etc. to food) at delicatessens, grocery carry-outs and salad bars. Once an outbreak begins, person-to-person transmission in families, schools, daycare facilities and nursing homes, tends to perpetuate the disease. Historically, the majority of outbreaks are associated with contaminated ground beef, but recently contaminated surface and ground water have been identified as frequent outbreak sources.

The outbreak in California spinach is not the first of its kind (see Table 1). Many outbreaks have been linked to E. coli and fresh lettuce or spinach in the last 13 years. California produces about 75 percent of the US spinach crop and the Salinas Valley (source of the current outbreak) is responsible for about three-quarters of the state’s production. Although cattle are the primary source of E. coli O157:H7, the organism is transmitted through the environment via storm water run-off of animal waste operations, sewage contamination of irrigation waters, contamination from human hands during harvest, packing and processing (also a potential link to water, or lack thereof, in handwashing and hygiene), rinsing and preparation.

One study found that E. coli O157:H7 persisted for five months in soil amended with contaminated composts or irrigation water and for 77 and 177 days on lettuce and parsley, respectively, when planted as seedlings.1 Some studies have shown that treatment of produce with chlorinated water reduces harmful microbes on the surface but others caution that the surface of produce can be difficult to wash given the varying texture and folds. In addition, plants may be able to internalize the organisms along with water and nutrients or via surface abrasions. Therefore, washing alone may not be effective.

Water treatment options in food production
The need for clean water and proper waste disposal in produce harvesting applications is a given, as is proper sanitization of processing equipment. Debatable is the feasibility and benefit of advanced water protection and treatment applications related to the production of produce. Should we focus on increased protection of irrigation waters from wild and domestic animals? What is the feasibility of on-site (i.e., POU) treatment of water used in the growth and processing of produce in the US? What are the risks related to the current procedures? If this E. coli outbreak in spinach is related to contaminated water, what options for water treatment at the field production level should be considered?

At press time, the Centers for Disease Control and Prevention (CDC) were focusing on the implicated farms, tracing back from illness cases to the environmental sources such as water, soil and the produce itself. Whether or not water is implicated in this outbreak, the role that contaminated water plays in relation to foodborne outbreaks needs to be considered along with feasible practices for control. For more information about the E. coli/spinach outbreak, visit ProMed Mail, International Society for Infectious Diseases at www.promedmail.org.