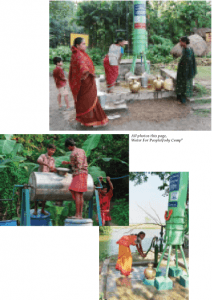 Arsenic is a naturally occurring, semi-metallic compound commonly found in water in many parts of the world, including India, Bangladesh, Taiwan, Japan, Mexico and some parts of the US. It requires water testing and analysis to detect as it is usually tasteless and odorless. Arsenic causes a sure and rapid death at high doses; ingested at lower doses over an extended period, it can cause a host of ailments, including skin disorders, cancers (particularly of the bladder and lungs) and eventually, death.1

Defining a crisis
An environmental health crisis of disturbing proportions continues to unfold in the West Bengal region of India where eight of 19 districts have reported high arsenic concentrations. India’s maximum permissible limit is 0.05mg/L; World Health Organization’s (WHO) established limit is 0.01 mg/L.

A population of more than 30 million lives in the affected area, which spans 13,000 square miles. The number of inhabitants actually using contaminated water as a primary source is estimated at more than 1.3 million, although the numbers have improved somewhat with awareness and mitigation efforts. Hundreds of thousands have been diagnosed with chronic arsenic poisoning; millions more are thought to be at risk. Studies in the region indicate that hundreds of thousands of people are demonstrating late-stage manifestations of chronic arsenic poisoning. Extreme poverty compounds the problem as few victims seek medical attention until the damage is done.

The first visible sign of chronic arsenic poisoning is melanosis (dark spots) on the chest, back, limbs and gums. In the more advanced stages, wart-like skin eruptions develop on the hands, feet and torso, which can lead to skin cancers. Continuing arsenic exposure may result in the enlargement of the liver, kidneys and spleen, which often develop malignant tumors. Long-term exposure can also result in disorders of the gastrointestinal, circulatory and nervous systems.

Arsenic hasn’t always been a water problem in West Bengal. It is, in fact, the by-product of attempts to solve other problems inherent with the surface water in the region, which is contaminated with microbiological, industrial and agricultural agents. Over the past several decades, the installation of shallow tube wells was heavily promoted as a safe alternative to the contaminated surface water. In the 1980s, scientists began finding evidence of arsenic contamination in this groundwater; it wasn’t until the mid-1990s that the dilemma became widely recognized.

Designing a solution
Water for People intervened in response to the crisis. Dr. Arun Deb, a former member of the organization’s Board of Directors, initiated work in the West Bengal region beginning in 1996, supporting arsenic-removal efforts and working to develop mitigation technologies appropriate for use in rural villages. The agency partnered with Bengal Engineering and Science University to develop domestic and wellhead arsenic-removal units using activated alumina (Figure 1). 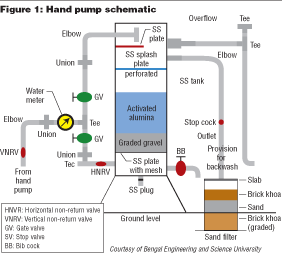 The in-home domestic units consist of two chambers—the upper houses the pretreated activated alumina and the lower stores treated water. For ease of handling (particularly for media regeneration and restoration), the media is enclosed in an impervious nylon bag with a pervious bottom. The media bags are easily removed for off-site regeneration or restoration.

The wellhead units consist of a stainless-steel column 12 inches in diameter and 7.2 feet tall. Water flows down through a 51-inch layer of activated alumina and an eight-inch thick gravel bed. The filter media is replaced or restored every eight to 12 months, depending on use and concentration levels.

These simple technologies are highly effective, relatively inexpensive and easy to maintain. One wellhead unit can serve between 200 and 300 families. The cost is approximately 93,220 Rupees ($2,000 US) for each wellhead unit, including training.

A safe process
Another important consideration is dealing with the captured arsenic in a safe and environmentally sensitive fashion. Water at each tube well is tested monthly and the activated alumina filter media is regenerated as needed, usually on an annual basis and sometimes more frequently depending on the arsenic and iron content of the source water and the volume of use. 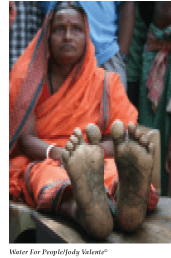 The regeneration process involves transferring the spent activated alumina to a stainless steel drum that is mounted horizontally on an axis to allow for rotation. The first step is an acid rinse, in which a dilute hydrochloric acid solution is added to the activated alumina in the drum. A crank is turned allowing the drum to spin, thereby agitating the media and enhancing the rinsing process. This step dissolves the accumulated iron deposits and dislodges them from the surface of the activated alumina pellets. The acid is transferred from the drum to a nearby sand bed, which allows the iron to be trapped in the sand close to the surface. The drum is rinsed with water, followed by the addition of a dilute solution of sodium hydroxide (caustic soda) and a rinsing step. The wash with caustic soda extracts the adsorbed arsenic from the media. The solution is transferred from the drum to the sand bed, which acts to trap the arsenic, preventing it from penetrating to the ground below.

A second rinse with hydrochloric acid is then performed, followed by a water rinse. The activated alumina is then removed from the drum and stored for transport back to a treatment site. The capacity of the regenerated activated alumina to remove arsenic is almost as much as a fresh filter bed. 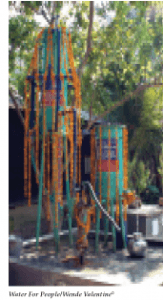 Subsequently, the spent acid is drained and collected in a separate plastic drum. The entire bed is then rinsed with tube-well water for half an hour. At the end of the regeneration, spent acid, alkali and rinse water are mixed and pH is adjusted to about 6.5 by adding 10 percent hydrochloric acid. A thick, brown slurry is immediately formed and disposed of at the top of the coarse sand filter. The arsenic-laden solids are intercepted and retained at the top of the filter. The entire regeneration process, including the spent regenerant treatment, is completed in about 10 hours.

The regeneration process is one of several ongoing maintenance activities paid for by a user charge—an essential prerequisite of filter installation. Each regeneration costs approximately 4,500 rupees ($100 US). The typical user charge of 10 rupees ($0.21 US) per month per family provides more than enough funds for regeneration and leaves some reserve for other operational costs.

With the assistance of Bengal Engineering and Science University, a central regeneration facility has been established north of Kolkata in one of the rural areas most affected by arsenic-contaminated groundwater. The facility is being turned over to a self-sustaining private enterprise. The regeneration of activated alumina has resulted in a business that will provide some of the poorest people in the world with a welcome source of income.

Future plans
Water For People is committed to helping eliminate India’s arsenic crisis and plans to continue its mitigation efforts indefinitely. The agency recently established a more permanent presence in the West Bengal region, including hiring full-time in-country staff to oversee this important work. To date, it has financed the installation of 103 units, directly improving the quality of life for an estimated 20,600 people. The incidence of arsenic poisoning has dropped dramatically where the units have been installed and people are living healthier, more productive lives. The challenge now is to replicate this success and build capacity to reach the millions of people exposed to arsenic-contaminated groundwater.

About the author
Water for People’s Communications Manager, John Kayser, was involved with the organization at its inception and managed the production of the agency’s first marketing materials. Kayser previously served as Marketing Promotions Manager for AWWA and Marketing Director for Geospatial Information & Technology Association. He holds a BS degree in business administration and marketing from Texas Tech University. Contact Kayser at (303) 734-3476, or email jkayser@waterforpeople.org.

About the organization
Water For People helps those in developing countries improve their quality of life by supporting the development of locally sustainable drinking water resources, sanitation facilities and health and hygiene education programs. To ensure project viability and expertise for ongoing repairs and maintenance of infrastructure and operations around the world, the agency strives to partner with local government entities, nongovernmental organizations, the local private sector and industry specialists. Water For People works closely with the communities it serves so that members are invested in the project and take ownership of its long-term operation. The organization is actively pursuing new partners and solutions and has modified its working model to strategically carry out its mission by working on a more regional, targeted basis. For more information about Water For People and its work to provide safe drinking water, adequate sanitation and health and hygiene education in the developing world, visit the website at www.waterforpeople.org.