On May 23, 2006, I had the opportunity to present a workshop on new European standards for point of use (POU) and point of entry (POE) devices at the Sixth European POU Drinking Water Trade Fair in Paris, France. The workshop attracted a great deal of interest from American, European and Asian manufacturers of drinking water treatment products. Most manufacturers had heard that these standards were nearly through the Comité Euro-péen de Normalisation (CEN) development process, but had few additional details.

Workshop participants were interested to learn the scope of these standards, along with requirements for certification, test methods and other details. Because NSF has been an active observer throughout the development of these standards, I was well positioned to be able to provide additional information. Those who participated in the workshop were able to spend an hour and come to a greater understanding of the new European standards.

Because of the high level of interest and the positive feedback after the workshop, I thought this information would also be valuable to readers of WC&P. I will summarize much of the information from the workshop in this and next month’s column.

Certification requirements
It is at the discretion of individual European countries to determine the level of required conformance to these standards. Because these standards are so new, many countries have not yet adopted any position with respect to conformance. In fact, some of the standards are designated with a ‘pr’ prefix, meaning that they are still going through the process of adoption to become official CEN standards. It is expected that all of them will be finalized in their current form by year’s end.

Currently, no third-party certification (to these standards) is required in any country. Self-declaration of conformance by manufacturers is an acceptable route to pursue. Over time, this may change as countries decide to require some additional verification of conformance. 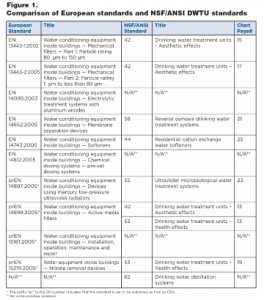 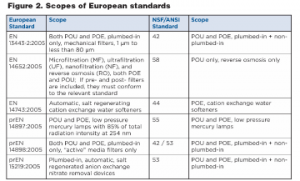 There are three European standards that do not have equivalent NSF/ANSI DWTU standards, the first two being EN 14095:2003 for electrolytic treatment systems with aluminum anodes and EN 14812:2005 for pre-set chemical dosing systems. A future European standard will address chemical dosing systems with variable dosing. 15161:2005 addresses installation, operation, maintenance and repair of water conditioning equipment.

Also of note is the fact that there is no European standard corresponding to NSF/ANSI 62—Drinking water distillation systems.

NSF/ANSI 58 covers POU reverse osmosis (RO) systems, whereas EN 14652:2005 addresses RO, microfiltration, ultrafiltration and nanofiltration, both POU and POE. However, the scope of EN 14652 is limited to systems with inlet size DN 15 to DN 100, which corresponds to about 5/8” to about 4” in diameter. So, many common POU RO systems will fall outside the scope of this standard because their inlets are smaller than 5/8”. 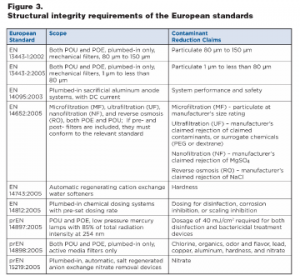 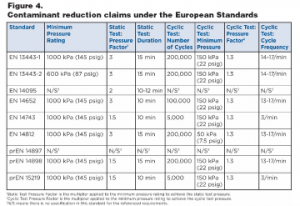 Similar, but different…
CEN Committee TC 164, Working Group 13 spent several years developing these new European standards. They took the time to consider and understand the NSF/ANSI DWTU standards as a part of their process. They appreciated the technical expertise and world leadership provided by the NSF Joint Committee on Drinking Water Treatment Units in development of the NSF/ANSI DWTU standards.

But they were also free to modify them as they saw fit, either due to specific technical concerns or for the sake of consistency with other standards, or for other reasons. As a result, the European standards have significant similarities with, but considerable differences from, the NSF/ANSI DWTU standards.

This scenario presented NSF with the opportunity to develop a guide comparing the two sets of standards. In fact, the figures presented in this article are copied directly from that guide. The NSF Guide to the European Standards is available for free downloading on the NSF website, at www.nsf.org/dwtu. Please take the opportunity to download your copy today.

About the author
Rick Andrew is the Operations Manager of the NSF Drinking Water Treatment Units Program. Prior to joining NSF, his previous experience was in the area of analytical and environmental chemistry consulting. Andrew has a bachelor’s degree in chemistry and an MBA from the University of Michigan. He can be reached at 1-800-NSF-MARK or email: Andrew@nsf.org.