Morocco: Water and the Sustainability Model

Even the most empathetic American may have difficulty trying to fathom life without clean drinking water. People living in the region known as the Maghreb have lacked potable water for as long as we have been marking time.

This area is directly below Spain along the Straits of Gibraltar, north of the Sahara Desert and west of the Mediterranean Sea. It includes the countries of Morocco, Algeria and Tunisia. The poor water quality results in a very high infant mortality rate (40.24/1,000 live births, ranked 73rd in the world1) and waterborne diseases. According to a recent report from the International Atomic Energy Agency, (IAEA), “…one in five people don’t have access to safe and affordable drinking water—and each year, over three million people die of waterborne diseases; among them more than two million are young children.” 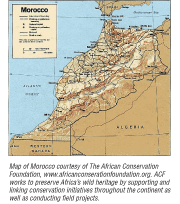 Water sources
In Morocco, household water is generally from groundwater sources. Most rural residences obtain water through a communal well (usually Moroccan women handle this chore). Morocco gets 62 percent of its drinking water from such sources.

Only 30 percent of the rural areas are supplied with water from public systems considered safe for consumption. Of the total population of 33 million people, more than 45 percent live in these under-served rural areas. Some estimates have stated that 20 percent of all Moroccans live in severe poverty. In rural areas, annual income of the poor is below $500 (US) per person.

The United Nations (UN) General Assembly has declared 2005-2015 the International Decade for Action Water for Life. The goal, as outlined in the UN Millennium Report, is to reduce the number of people by half who presently are without adequate, affordable and safe water. Morocco and northern Africa are on top of the list for UN study, support and initiatives.

Government
Morocco is a constitutional monarchy with an elected parliament, a Prime Minister and an active King. In 1999, after the death of his father, King Mohamed VI was crowned. He and the elected government continue to strengthen the various systems for economic development. This process has been in full force since the 1980s. Roads, trains, communications and water issues are the priority throughout the entire country. Changes in laws and governance have also been enacted to support business and prepare the country to compete globally and to modernize itself for technology and production. Sectors including tourism (Morocco’s known history dates back to 8,000 BC), fishing (Morocco has over 2,500 miles of coast line), manufacturing and the service industries are at the forefront of the government’s strategic economic plan. At the root of these changes is an overhaul of the education system. The municipal drivers for the country are the cities of Casablanca, Tangier and Marrakech. The capital is Rabat. Morocco is a moderate Muslim country that is politically stable. It is the regional hub for business at the geographic crossroads for North Africa, Europe and the Middle East. Holding various trade agreements with many nations, Morocco is a bridge to many zones.

FTA advantages
A driving force behind these changes is the US-Morocco Free Trade Agreement (FTA), commenced in January 2006. Among many benefits for both parties, it states, “more than 95 percent of bilateral trade in consumer and industrial products becomes duty-free immediately, with all remaining tariffs to be eliminated within nine years.” In addition, this FTA provides protections to US investors for intellectual property rights, transparency in government procurement, investments, services and e-commerce. Morocco is a stable, democratizing and liberalizing Arab Muslim nation. As stated by President Bush, “Morocco is important for US interests in the Middle East.” The US policy toward Morocco will continue to create closer ties and strengthen the relations between the two countries.

Easing investment procedures, the Moroccan government has eliminated foreign and domestic investment barriers. It has adhered to international business law practices and standard accounting processes and procedures. The government has also established a secure, predictable and legal framework for US firms, covering all forms of investment. In most circumstances, it offers the rights to establish, acquire and operate investment on an equal footing with native Moroccan investors. Some of these incentives, according to the government’s website, include “100 percent of profits may be repatriated without limiting the time or the amount; 100 percent of a company can be owned by foreign interests; and, exoneration from the regular formalities for the acquisition of land destined for an investment project.” Firms have the ability to insure with Overseas Private Investment Corp. (OPIC). According to recent data, the Moroccan monetary policy is well managed as a result of the foreign exchange rate anchor. Morocco inflation fell to one percent in 2005 and between the years 1999 to 2004, it held steady at 1.5 percent. GDP (purchasing power parity) is at $138.3 billion (2005 estimate)*.

Friendship with the US
US-Moroccan relations date back to 1777. Morocco was the first country to seek diplomatic relations with the Government of the US directly, dealing with Thomas Jefferson and John Adams on trade affairs. The country is America’s oldest and closest ally in the region. Formal US relations with Morocco date from 1787, when the two nations negotiated a Treaty of Peace and Friendship. Renegotiated in 1836, the treaty is still in force, constituting the longest unbroken treaty relationship in US history.

The Peace Corps has been active in Morocco for more than 40 years, with the first group of 53 volunteers arriving in the country in 1963. Since that time, nearly 4,000 volunteers have served in Morocco. Many have worked on the clean water initiative in rural areas. The following excerpts from Peace Corps volunteers’ writings offer insights into the reality of the water conditions inside Morocco’s rural villages. (Personal entries from Peace Corp volunteers can be viewed on www.peacecorps.gov.)

An opportunity for enterprise
Is the time right for water purification/filtration manufacturers to invest in Morocco? Perhaps. Supporting the notion of profitable investment are the many strategic initiatives developed and presently underway through various governmental and NGOs. The Moroccan National Office of Potable Water (ONEP) is one such organization. Its goal is to increase the water supply capacity to meet the ever-increasing rural population’s personal and agricultural demands for clean water. As reported by the American Embassy in Morocco, ONEP plans to spend $800 million (US) on water distribution improvement. In addition, the government of Morocco plans to invest $1.5 billion by 2010 in water projects. As recently as December 2005, The World Bank approved $60 million (US) for the Morocco-Rural Water Supply and Sanitation Loan.

Geography and funding
These financial supporters and others will assist the Moroccan government’s efforts to pipe more drinking water to rural areas, with the aim of improving rural living conditions and promoting rural social and economic development. The money from The World Bank has been specifically earmarked for:

Topographically, Morocco has diverse landscapes but the climate in many of these regions is dry to very dry, with severe droughts in some areas. The IAEA in Morocco is applying isotope hydrology for water management and has had impressive success. This technology, which supports Morocco’s ONEP water reserve project, has recently identified water for an area just north of The Sahara known as Guelmin. Made up of about 100,000 farmers and nomads, it had become so water deficient, concerns regarding the destiny of these people began to loom. Here, hydrologists identified a new water source in less than two years using isotope hydrology. According to the report by the IAEA, this water was tested and confirmed clean and then diverted from about 50 miles away to resupply the Guelmin aquifer, which was close to extinction; this newly discovered water had been flowing untapped and depositing directly into the sea. Over a four-year period, the IAEA has transferred this technology to nine North African countries. Morocco’s Center for Nuclear Research has established its own isotope hydrology laboratory with assistance from the agency. This lab will serve other African countries as well.

The US Agency for International Development (USAID) is also supporting the efforts for clean water. In fiscal year 2005, USAID assistance was $28.2 million; the Fonds d’Equipement Communal (FEC), created in 1959, is a lending resource supported by international institutions such as the World Bank, German development cooperation agencies, USAID and the EIB. It finances local investment projects for municipalities, local public service providers (such as water or power supply companies) and small and medium-scale ventures that are promoted by local authorities in Morocco.

The American Chamber of Commerce in Morocco, opened in 1966, has a strong presence in the country. The AmCham is an organization dedicated to assisting those in business and government for the common goal of economic growth and mutual prosperity. The US Embassy, Casablanca Chamber of Commerce, the Investment Regional Center of Grand Casablanca and the Ministry of Town and Country Planning, Water and Environment are also entities that support sustainable projects for all of Morocco.

About the authors
Jeanmarie Tenuto is CEO of Centaur Strategies, LLC, a marketing and business strategy firm based in New Jersey. She and her team work with companies, large and small, from various industries developing corporate business strategies and implementing sustainability initiatives. She is the author of “The Sustainable Model. A New Age of Consciousness for Business-Government-Individual in the 21st Century”. She can be reached at (973) 239-9466.

Wadih M. Captan, CEO of Captan Industries has a proven track record of success and 30 years of experience in Moroccan trade. He also performs as a primary liaison working with and on behalf of the US companies in Morocco. For more information, contact him at Captan Industries Company, 380 Knickerbocker Rd., Suite 2C, Dumont, NJ 07628, telephone: (917) 545-4274 fax: (201) 384-3642, Email: wcaptan@aol.com.