Sweet and Pure, All Year Long

Mike and Sharon Higgins moved from Joliet, Ill. to Farmington, N.M. in 1993 with simple goals: make a living and provide for retirement. They encountered an elderly businessman willing to sell his one-year old bottled water store. The business needed an ambitious marketing program, something which was beyond the capabilities of the aged owner. Providing a much-needed product in the high desert community with little rainfall and few high-quality resources was appealing, with the potential for a great future.

The husband-and-wife team seized the opportunity as an ideal pathway to fulfillment of their goal. “I developed the habit of eating early in life and have never given it up entirely,” joked Mike Higgins, the spokesman for the pair. “Since it takes income to purchase food and shelter, it’s a good idea to continue to work for a living. Being my own boss balances the daily stress with the pleasure of daily accomplishments.” 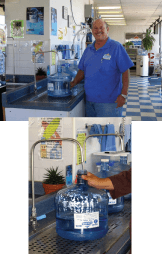 For the first three years, the couple worked full-time jobs in addition to running the store, giving the business a chance to grow without the strain of providing an immediate income. Mike drew on his 25-year career as an automotive mechanics teacher to learn the technical side of water treatment. He continued his education at the local community college, taking chemistry and water-related classes. These efforts have been rewarded as he has earned a reputation for technical expertise. Higgins, a member of the Colorado Water Quality Association said he planned to take certification tests later in the year.

What’s in a name?
The couple chose to call the company Clear Creek because it sounded cool, clean and refreshing and registered, “We take out everything but the wet!” as the company’s slogan. Later they learned that a county and rushing rapids in central Colorado share the same moniker. Neither has objected to the business using the same name.

Diligent and sustained effort by the Higgins to maintain the highest possible standards of quality has been rewarded. In 2003, the company was honored for producing the Best Tasting Water in the World in the Berkeley Springs International Water Tasting Competition, an event held each February in historic Berkeley Springs, W.Va. (Berkeley Springs lays claim to being the U.S.’s first spa). Clear Creek Water surpassed Manitoba, Canada by a single point, earning the gold medal. Their dedication to providing the very best is symbolized in the name and that award and extends to all aspects of the business.

Business and town growth
The company has grown tenfold, generating a strong income in 2005. Clear Creek is now one of three water purifiers in a town of about 43,000, with a solid reputation, known for cooperating well with the competition. Without a fleet, their services are limited to the Four Corners area, where New Mexico, Arizona, Utah and Colorado intersect.

Higgins sees his customers on an appointment-only basis, usually for estimates and home service. He concentrates on outside sales of household water softening, filtration and RO systems as well as commercial applications. After determining what type of product is necessary, based on water samples taken from the location, Higgins works closely with a group of California manufacturing firms to acquire the needed systems and components. His relationship with Mike Colburn of Dime Water gained Higgins permission to market some of the residential treatment products and systems under his own brand name.

Purified water refills are the core element of the business; approximately 70 percent of their customers refill their own bottles at the store. Higgins compares the retail business to a local filling station. “While that statement indicates a very simplified version of a very complicated business, in many ways it is similar to the gas stations of the past,” he said. “They provided a place to refill the cars along with ancillary products and services. We do the same at Clear Creek.”

Several additional part- and full-time employees are hired as need dictates, though effective employees are hard to find. “Right now we don’t have the income to pay top wages, so that is probably our main drawback,” said Higgins. “Most of the tasks involve no more than minimum skills, yet the training period to teach the necessary procedures to top-notch employees is seldom finished before they move on.” Many of those hired only work for the summer months then leave for college. During the peak sales season, Higgins adds temporary help for special exhibitions and promotions.

A sweet future
While he keeps the physical plant operating, maintains the equipment and handles service calls, Sharon Higgins takes care of everything in the store, from general maintenance to customer service. Bottles, crocks, coolers and other products are sold through floor sales and service. “My wife’s contribution to the success of the business are a result of her extensive retail skills. She makes all the sales in the store. Sharon has incorporated her considerable cooking ability and favorite craft (making candy) into a 20-percent piece of the revenue stream which supplements the store’s annual income,” Higgins said proudly. In the fall, Sharon exhibits her specialties at craft fairs around the area.

Home Sweets By Sharon, a subsidiary of the water firm, features a product line any candy lover will savor. She makes 30 varieties of hard candy (using fruit and spice flavors) and adds chocolate specialties during holiday seasons such as Christmas and Easter. She uses no preservatives in her products, which limits the candy-making business primarily to the cooler months. Sharon makes brittle of many types: pistachio, cashew and almond to name a few. For select consumers, she is known for her jalapeño peanut brittle. The recent addition of a refrigerated candy display case means Sharon will have the ability to expand her inventory. She said, “We purchased the unit from a business that was closing but we didn’t get it ready for the store until recently. Now I’ll have to get back in the kitchen more often. Everyone keeps telling me to make more candy!”

One process for everything
The company uses a two-stage, six-step purification process for all of its water. The first stage is ion exchange, carbon filtration, sediment filtration and reverse osmosis. The second stage is carbon filtration (again) and ultraviolet light. Bottle customers may request a seventh step, ozonation, at the delivery point.

The firm purchased an ice block maker and six freezers for storage to capitalize on an idea Mike Higgins was introduced to at an exhibition. Block ice, made with purified water, is more solid, has fewer air pockets and lasts longer than regular ice. The blocks are sold in 10- and 15 lb.-boxes to dealers. Using the purified blocks, Hawaiian shaved ice is created and sold at the counter in a variety of flavors and snow cones are sold at local events. All are highly popular in the arid climate, generating nearly 40 percent of the couple’s sales in the heat of summer.

With their growth and success to date, Higgins is willing to expand into other areas, such as bottling, home delivery and additional home treatment systems. Poor health imposes some physical constraints, prompting him to think about retirement. “Our three children often come in for the fun of it but they have no interest in the business. They are involved in their own pursuits and quite happy with their choices. When the time is right, we will consider selling the business at the right price to someone who shows they have the willingness and ability to uphold our valued reputation,” he said. Until then, he and his wife will continue to offer customers the highest quality drinking water in the area, packaged with their friendly customer service along with the best candy in town!

Editor’s note: Home Sweets by Sharon are available by mail. Depending on the amount requested, orders are filled within one day and shipped by priority mail. Requests can be mailed to Clear Creek Water or sent via email to mike@clearcreekwater.com or sharon@clearcreekwater.com.