The Dow of Water

The first place to become familiar with The Dow Chemical Company is their informative website. “Dow is a diversified chemical company that harnesses the power of science and technology to improve living daily…” the text there begins. The site goes on to explain both its practices and its values: “This worldwide commitment helps consumers lead better lives, customers succeed, stockholders prosper, employees achieve and communities thrive.” 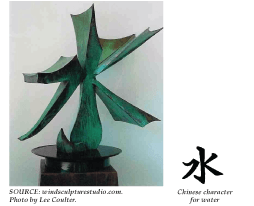 To acquaint WC&P with Dow, four managers of different operations sat down and put a human face on that philosophy—making it clear that the company’s commitment is one that is daily renewed and strengthened.

Jon T. Goodman, Eric Grates, Alan Greenberg and Brian Powers took a break from their trade show duties to share their insights with WC&P during WQA Aquatech last March. A diverse group of gentlemen with unique individual tastes, they share a deep-seated respect for the very special company they work for.

“Speaking for myself, Dow is a very professional organization,” said Grates as the others nodded. “The standards of treatment never vary, internally or externally—there is no difference, no lessening of respect, “ explained Powers. “The integration of what you’re expected to know and how you’re encouraged to share it and to use it for the greater good,” added Goodman. All this is very important at Dow, Greenberg summed up, noting that the company’s ethical standards—the treatment of customers—“Are so high that after many years they continue to stun me. There are no gray areas at Dow: there is white and there is everything else.” 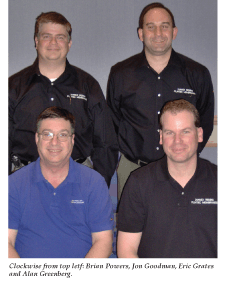 “It’s that continued insistence on quality, reliability, consistency and innovation to better supply the market, for me personally, that makes me really happy to get up in the morning and say I work for Dow,” Goodman said.

Dow employees around the world are involved in a long list of services and with products that begin with agriculture and go straight on through the entire alphabet to water, which is this group’s area of specialization. In fact, Greenberg explained that when someone asks what he does for Dow, “My answer is I make clean water.”

As he noted upon reflection, looking at it from that perspective, where else would anyone want to work?

Flexibility of career
Powers believes that Dow’s strength comes from flexibility, allowing people to change career focuses or products without leaving the organization. “All of us have worked in at least two functions—some of us three—and that’s just so far!”

There’s no corporate typecasting at Dow—the company has achieved its excellence by providing employees with internal opportunities and the freedom to pursue them. In general, job functions are based in sales, technical services or product development.

Greenberg started as a bench R&Der developing ion exchange resins; Powers began in sales, moved to technical services, then product development and then to website marketing; Goodman was the third Dow employee at FilmTec, which Dow purchased in August of 1985.

“FilmTec was new to Dow and I didn’t know whether I wanted to go into tech services or sales. They told me FilmTec would allow me to do both; it has and it’s fun,” he explained, adding that FilmTec succeeds in part because of its blurred line between the technical and commercial sides.

Greenberg, Powers and Goodman have worn different hats at different times in the corporation and are now (in different divisions) in marketing positions. The flexibility noted earlier has allowed these three executives to serve in multiple capacities—Goodman for membranes (the Americas); Powers for resins (the Americas); Greenberg for business development and new opportunities in the Americas.

“And now we’re here, at this point, so there is a level of trust between all of us.” That longevity translates into a sense of ease, internally, they agree. “And, since we’ve had more than a decade to sit over lunches and talk about everything—including what we think needs to be fixed —we can always bring that to the table,” Goodman adds.

Grates is younger than the others, newer to Dow. He doesn’t share those dozen years’ worth of camaraderie, of course. “But I was welcomed into the fold and I know any one of these guys is there for me. Where necessary, they have brought me up to speed,” he explains, adding that knowing he has their support increases both his confidence and his success.

Flexible strategies
Dow’s vaunted flexibility means constant evolution on many levels. Ask how Dow is structured and someone is bound to reply by glancing at their watch and asking what time it is—but it is done with both respect and laughter. Respect because it works—in the last 15 years there have been five or six major reorganizations—and laughter because there is a paternal quality to treating different businesses and product lines individually and letting them grow.

Generally speaking, the company has two portfolios: one of products/commodities (bulk chemicals, polyethylene plastics) and a separate portfolio of performance specialty products, which is where water products fit in. There is a huge range of models, plus specialty- and performance-grade products, complemented by Dow’s stand alone businesses like water treatment.

Goodman explained that Dow has never changed its focus on water purification: with resins, membranes, or emerging technologies, “Dow’s quest is how to continue to improve upon our strengths. We’ve had very enlightened management,” he added, noting that FilmTec has the manufacturing excellence necessary to produce the same membrane each and every time, thanks to innovative automation and quality control.

How many water technologies employees are there? Fewer than there would need to be if Dow made ion exchange resins and membranes like everyone else does. In the U.S. the largest concentration of employees is at FilmTec in Minneapolis, Minn. Ion exchange resin manufacture is a very capital-intensive business with a peculiar manufacturing process. Dow has three sites worldwide where resin products are made (with a relatively small staff) thanks to state-of-the-art automation. Greenberg explained that is not true of all resin manufacturers. “At Dow, we excel at automating process technologies.”

Goodman agreed, adding that automation has been a significant boon, with the modernization of the back end of the membrane manufacturing process being implemented at the same time as capacity expansion. The combination has made Dow a leader. “From home drinking water to desalination plants: we are the leader. We are the leader in membrane technology, from the RO membrane unit under the sink to the world’s largest desalination plant,” he said.

The way that FILMTEC® membranes are manufactured—the precision that is incorporated into that process—means that every square inch of membrane works better than that of a competitor’s membrane, according to Goodman. This in turn means that with the same pretreatment and the same design philosophy in any particular application, there is more uniform participation of every square inch, which minimizes operating cost and maximizes performance.

“If you look at unit cost we tend to be higher,” Goodman says. “But when you consider the quality, dependability and performance of FILMTEC membranes our products provide the lowest cost of operation. Every time.”

Greenberg held sessions on WQA Aquatech’s showfloor on why titanium oxides are better than iron media. “We are not bad-mouthing one technology over another. We share what we know, ethically,” he explained.

Arsenic removal
As you’re probably aware, in January 2001 the U.S. EPA said that effective January 2006 the maximum contaminant level for arsenic would drop from 50 ppb to 10 ppb. This affected approximately 3,300 community water systems; that number doesn’t even include private water systems or individual well users and the like using the same aquifers.

The challenge was simple—50 ppb is a really small amount—to have to take it down to 10 ppb (which is a lot smaller); the issue is cost. People don’t want to have to pay more. Large municipalities have several options; small ones have more challenges.

Greenberg, at the time, was marketing manager for ion exchange. “As we looked at the technologies within two weeks of the U.S. EPA regulation coming out, we put a statement up on our website: “Dow does not recommend the use of ion exchange resins for potable drinking water for arsenic removal”. We had two reasons: we are concerned about the capacity—it is relatively low capacity; with the necessary regeneration—you’re just putting that arsenic back into the environment. In addition, it has relatively low selectivity, compared to other ions. If you overrun the resin, you have the potential to dump that arsenic back into the water supply at higher concentration levels than at what you took out.”

In industrial processes with experienced, sophisticated resin users with enhanced monitoring and scheduling, that risk is internally managed successfully by our customers. For potable drinking water Dow did not feel this was the best answer.

“We looked at RO—which is good for removal of one type of arsenic—and is specified as a ‘best available technology’ by the U.S. EPA. By law they (EPA) cannot mandate removal without stating best technologies for accomplishing same. Due to cost and operational issues associated with meeting the regulations, we had concerns about promoting RO as our technology of choice.”

“We found technology developed by Stevens Institute of Technology and arranged to license their patents; ADSORBSIA™ GTO™ titanium-based arsenic removal media is the product we created from them. Dow has the best process engineers in the world. Arizona State University’s Dr. Paul Westerhoff has tested the product and determined that its kinetics are 10 times faster than the iron-based media currently on the market. ADSORBSIA media holds on to the arsenic and can be disposed of in 49 states as non-hazardous waste because it is locked in and cannot get back into the waste stream. In fact, it has passed TCLP and California’s WET test. That’s part of the beauty of this product,” Greenberg said.

Product advantages
As pH changes, all of the media will change how they perform; under most conditions, ADSORBSIA media will out perform its competitors. Phosphates and sulfates interfere with many products—not ADSORBSIA media. Operate at lower pH (6.5 instead of 8.5) and it can mean longer runs. In systems that have varying pH or are using pH adjustments, ADSORBSIA media holds removed arsenic without purging. That ability to be the best performing, under a lot of different water conditions, is significant. Tie in the kinetics and it means we can design a much smaller system. This makes it an ideal choice for places where space is at a premium—schools, prisons, libraries and the like.

When it comes to potable drinking water, we think it’s a better answer than ion exchange or RO. We searched for and found the right answer.

Flexibility in practice
“A seller came to us who had a customer who wanted an RO membrane to snap onto the end of a garden hose…for a spot-free rinse for cars and windows,” said Goodman. “While that was technically possible, it seemed like an ion exchange opportunity…we suggested that an ion exchange cartridge would be a far better solution for what the customer was seeking. Customer convenience and simplicity drive our decisions, not a requirement to use one product or another. And now we have several customers using those cartridges.”

“When someone comes to us with a problem we don’t try and fit them into some pre-determined solution box. We have a lot of different products and technologies. If you were to go to an ion exchange company with a problem, they would seek to solve it with an ion exchange solution. We don’t presuppose any one technology might be the answer—and we are free to find creative solutions across all the disciplines,” Goodman summed up.