The Analysis of Arsenic

On January 22, 2001 the U.S. Environmental Protection Agency (EPA) replaced the 50 parts per billion (ppb) standard for arsenic in drinking water with a new standard at 10 parts per billion.  The rule became effective on February 22, 2002 and a system compliance date was set for January 23, 2006. Ever since, arsenic has been an analyte of interest and the subject of many articles, discussions and meetings. The change in the standard has launched many initiatives in product development and inspired many commercial undertakings. This new standard affects 54,000 community water systems and 20,000 non-community water systems in the U.S.1

Arsenic is considered a metalloid or semimetal, having distinct properties between metals and non-metals. Arsenic occurs naturally in rocks and soil. Consequently, it can be found as a contaminant in both ground water and surface water sources, although higher levels are found in ground water. Arsenic is generally present in drinking water at levels between two and 10 ppb, but regional differences in both ground and surface water sources can result in levels much greater that 10 ppb. According to the EPA document Arsenic in Drinking Water, short- and long-term health effects can result from human exposure to arsenic. Short-term exposure to high doses of arsenic can have adverse effects, but long-term or chronic exposure has been linked to cancer of the bladder, lungs, skin, kidneys, nasal passages, liver and prostrate. Much has been written about arsenic as a contaminant in drinking water, so I won’t spend too much time on it here. Suffice it to say that the change in the standard to 10 parts per billion has focused attention on the various laboratory methods used to analyze arsenic to this new low level. Most routine laboratory methods are used to determine the total amount of arsenic in a sample. Arsenic can exist as various compounds, both organic and inorganic. In drinking water, arsenic is generally found in two specific species or valence states, namely Arsenite (also referred to as trivalent arsenic, As+3, or As[III]) and arsenate (also referred to as pentavalent arsenic, As+5, or As[V]). In some cases, an analysis to determine the precise form of arsenic (speciation) is required in addition to the total arsenic.

A search of The National Environmental Methods Index (www.nemi.gov) lists 36 specific methods for the analysis of arsenic. Most of the list refers to methods utilizing spectroscopy, specifically mass, emission or absorption spectroscopy. One method references the use of test strips to determine the total amount of arsenic. There are several commercially available products that utilize these test strips. These products are referred to as semi-quantitative because the results are determined by comparing the processed strips against a color chart with various increments from zero to 500 ppb. These test strips cannot be used for speciation. When using these products, make sure you understand the limits of detection and the reporting units.

The three most common methods employed in the analysis of drinking water are EPA 200.8, Determination of Trace Elements in Waters by Inductively Coupled Plasma–Mass Spectrometry; EPA 200.7, Determination of Metals and Trace Elements in Water and Wastes by Inductively Coupled Plasma-Atomic Emission Spectrometry and Standard Method 3113 B, Electrothermal Atomic Absorption Spectrometric Method. Emission and absorption spectroscopy are closely related. Both technologies rely upon the fact that characteristic frequencies of electromagnetic radiation (spectra) are produced by elements like arsenic when they are vaporized and ionized using either an inductively coupled plasma (Methods 200.7 and 200.8) or a graphite furnace (Method 3113 B).

Figure 1 illustrates a typical emission spectrum produced when an element is vaporized at extremely high temperatures. Each unique spectrum acts like a fingerprint that the analyst can use to identify and quantify the element that is of interest. Most of the lab instruments being used in a modern drinking water laboratory can simultaneously detect and quantify many elements. The ICP-AES instrument used with Method 200.7 makes use of these characteristic atomic-line emission spectra. The spectra are dispersed by a grating spectrometer, and the intensities of the line spectra are monitored at specific wavelengths by a photosensitive detector. The intensities are converted to concentrations and reported by the laboratory generally in parts per million (ppm) per mg/L.

Our laboratory analyzes arsenic by Method 200.8, Inductively Coupled Plasma – Mass Spectrometry or ICP/MS. Method 200.8 is used to determine the concentration of 21 different elements, including aluminum, antimony, arsenic, barium, beryllium, cadmium, chromium, cobalt, copper, lead, manganese, mercury, molybdenum, nickel, selenium, silver, thallium, thorium, uranium, vanadium and zinc. The ICP/MS method is favored because its method detection level is below two parts per billion for arsenic, well below the new EPA maximum contaminant level (MCL) of 10 parts per billion. There are three primary parts to the ICP/MS instrument. The first part is the inductively coupled plasma ion source, which is used to vaporize and ionize elements in a water sample. The second part is the mass analyzer, which is used to separate elements based on their mass-to-charge ratio. Essentially, the mass analyzer separates the elements based on the relative weight and electric charge of each element. The third component is the detector, which measures the intensity of each specific element that strikes the detector and indicates the amount of the element in the sample.

An accurate analysis using this method begins with the proper collection, preservation, handling and storage of the sample. For the determination of total recoverable arsenic, a 500 mL sample collected in a clean plastic container (preferably supplied by the laboratory doing the analysis) is filled and delivered to the lab within two weeks of taking the sample. Upon arrival at the lab, the sample is acidified with nitric acid, mixed and held for 16 hours. After that, the pH is checked to assure that it is less than two. If not, the sample is re-acidified and held for an additional 16 hours until verified to be less than two. Acid preservation can be done at the time of collection; however, to avoid using strong acids in the field, transportation restrictions, and possible contamination issues, the method recommends that this be done in the laboratory. 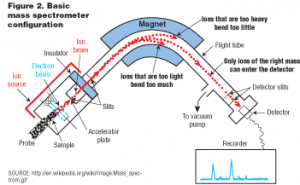 As with all methods, rigorous quality control is employed to make sure that the instrument is working properly and is capable of delivering accurate results. Calibration curves are developed for each metal or metalloid being analyzed. Calibration standards in the range from one to 100 parts per billion are typically used, in addition to a series of blanks.

If you are responsible for determining treatment options for the removal of arsenic, you may want to discuss speciation testing with your laboratory. In most cases, treatment options require the conversion (oxidation) of arsenite (As+3) to arsenate (As+5) prior to applying removal techniques such as ion exchange or reverse osmosis. Knowing the precise amount of each species of arsenic may assist you in selecting proper treatment options. Speciation of arsenic requires special testing that is available through a few commercial laboratories

About the author
Stephen R. Tischler is Vice President of Business Development for National Testing Laboratories and a member of WC&P’s Technical Review Committee. A former analytical chemist at NASA, he has a long history in the aerospace industry with expertise in quality control and analytical testing method development. Tischler has a bachelor’s degree in chemistry from John Carroll University and a master’s degree in business from Baldwin-Wallace College. National Testing Labs provides assistance to POU/POE dealers involved in the analysis of drinking water for customers using private wells or municipal sources. For more information, call (440) 449-2525 or visit www.ntllabs.com