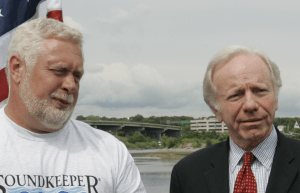 U.S. Senator Joe Lieberman (D-CT) joined Long Island Soundkeeper Terry Backer to reveal the results of an exclusive water program in Connecticut. Over 275 storm drains in Norwalk were fitted with Smart Sponge® water filtration technology, manufactured and distributed by Arizona-based AbTech Industries, Inc. The non-toxic, funny looking sponge-like material uses an antimicrobial agent to destroy health-threatening microorganisms, including E. coli and other fecal coliforms. Initial field tests indicated average removal rate was over 75 percent and the maximum removal rate was 99.9 percent. The City of Norwalk will continue to evaluate the project’s success according to the percentage of reduction in hydrocarbons, bacteria and other pollutants entering Long Island Sound from targeted catch basins. (Photo by Getty Images.)

Rolan takes the helm
Terry Rolan, Director of the Durham, N.C., Department of Water Management, stepped up as AWWA’s newest President during its annual conference in San Antonio, Texas in June. He outlined his three priorities for the next year: communicating the value of water to consumers and decision makers, the value of membership to a new generation of members and the value of involvement in the Association to current members. “I am excited about the opportunity to serve you and all the members of AWWA as your President, as we work together to make AWWA just a little bit better than when we started. Our strength as an organization has and always will rest in our dedicated volunteers who work tirelessly to make AWWA and the water profession the best that it can be,” said Rolan.

B&H Labeling Systems, a leading international supplier of high-speed roll-fed labeling equipment, announced the appointment of Joaquin Kunkel to the position of Director of Mexico for B H Labeling Mexico S. de R.L. de C.V. Based in Mexico City, he will be responsible for leading the teams that develop sales and provide customer support, in-country service, parts and training to multiple industrial markets. Born in Venezuela, raised in Mexico and fluent in Spanish and English, Kunkel has 15 years of extensive experience in the packaging industry, primarily setting up operations in Mexico and developing organizations and markets. Previously, he was General Manager with Sodimexpack and Erhardt + Leimer. Kunkel holds a BA in engineering from the University of Texas (Austin) and has completed graduate coursework at the Instituto Tecnológi-co Autónomo de México (ITAM).

Aquatech International Corporation announced the addition of John Livingston as Business Development Manager for WATERTRAK. He will be based in San Diego, Calif. and his responsibilities will include developing a national distribution network, marketing and sales plans. Livingston has over 25 years of experience in the industry, during which he held National Sales Manager positions with Culligan and USFilter/STRANCO. He holds a BS in geology from Centenary College in Shreveport, La. Livingston can be reached at livingstonj@aquatech.com or (760) 632-1127.

Executive appointment for de Jong
Light Sources, Inc. of Orange, Conn. and sister company Lighttech, Ltd. have appointed Guust de Jong Executive Vice President of Business Development. de Jong served with Philips Lighting for over 29 years, most recently as European Sales and Marketing Manager UV. Christian Sauska, CEO of Light Sources, Inc. said, “He brings a great deal of experience in ultraviolet and specialty lamp applications and markets on an international basis. With the continued growth of our companies, Guust will be responsible for development of business opportunities in Europe, China, India, the Middle East and the Asia Pacific Region.”

A. O. Smith Electrical Products Company named Sarah C. Sutton as Vice President-Global Finance. Sutton’s responsibilities will include establishing and monitoring financial and accounting policies, procedures and reporting for the company’s U.S., Mexico, China and Europe electric motor manufacturing and distribution facilities. She joined the organization in 2002 as Manager-Financial Planning and Analysis and was named Director in 2004. Sutton previously held the same position for Dr. Pepper/Seven Up-Cadbury Schweppes in Dallas, Texas. She holds a BS in administration from California State University (San Bernardino) and is a member of the American Institute of Certified Public Accountants.

Sendler appointed U.S. Manager
Atlantium announces that Norm Sendler of Ecosure, Inc. of Mesa, Arizona, is now U.S. Sales Manager. He has more than 25 years experience in the water treatment and fluids management arena, including both mechanical and chemical water treatment solutions. Sendler’s accomplishments include the design and manufacture of early RO systems in the 1980s, incorporating many automation tools to monitor and control system operation. He is an active Senior Member of the Instrument Society of America.