Stage 2 DBPR
The Stage 2 DBPR builds upon the Stage 1 DBPR to reduce levels of total trihalomethanes (TTHMs) and haloacetic acids (HAA5) in distribution systems. Affected public water systems (PWS) include community water systems (CWS) and nontransient noncommunity water systems (NTNCWS) that either add a primary or residual disinfectant other than ultraviolet light or deliver that type of treated water. CWS and NTNCWS that serve at least 10,000 persons and meet the disinfection criteria listed above will be required to conduct an initial distribution system evaluation (IDSE) to help identify areas within a distribution system that have the highest levels of TTHMs or HAA5. Once identified, these locations will be selected as the new Stage 2 compliance monitoring sites.

LT2
In April 1993, Cryptosporidium caused what is considered the largest outbreak of drinking water-related disease in U.S. history. More than 400,000 people in Milwaukee, Wis. became ill with cryptosporidiosis, a gastrointestinal disease that contributed to the deaths of 69 people.1 To reduce the occurrence of this organism in finished water distributed by public water systems, U.S. EPA finalized the LT2 rule. One of the requirements of LT2, published on January 5, 2006, is increased monitoring for Cryptosporidium . The data generated during this monitoring will assist water supplies in adjusting treatment if necessary. LT2 applies to all PWS that use either surface water or groundwater under the direct influence of surface water. Approximately 14,000 systems serving roughly 180 million people in the U.S. will be required to monitor under LT2. 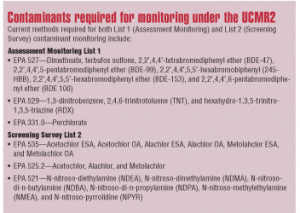 UCMR2
UCMR2, like its UCMR1 predecessor, is designed to collect occurrence data on chemicals not currently regulated by national primary drinking water regulations. These chemicals are known or anticipated to occur in public water systems and may warrant regulation under SDWA. UCMR2 will require all PWS serving 10,000 or more people and a representative sample of 800 PWS serving 10,000 or fewer people, to conduct quarterly assessment monitoring for 11 contaminants (List 1) during a 12-month period covering July 2007 to June 2010. In addition, all PWS serving more than 100,000 people along with 320 representative large systems (serving 10,000 – 100,000 people) and 480 representative small systems (serving 10,000 or fewer people) will be required to conduct a screening survey for 15 contaminants (List 2).

Emerging contaminant monitoring
The advancement of liquid chromatography (LC) and mass spectrometry (MS) technologies has made it possible to analyze many new environmental compounds. Because of their high sensitivity and specificity, these technologies have been widely used in analyzing endocrine disrupting chemicals (EDC), pharmaceutical and personal care products (PPCP), perfluorochemicals (PFC) such as perfluorooctanoic acid (PFOA) and perfluorooctane sulfonate (PFOS), polar pesticides and pesticide metabolites such as chloroacetanilide and acetamide herbicide degradates in drinking water. These compounds cannot be effectively analyzed by gas chromatography/mass spectrometry (GC/MS) that is commonly used in environmental analytical laboratories.

New GC/MS technology has been used in the analysis of polybrominated diphenyl ethers (PBDE), broad-spectrum taste and odor compounds, pesticides and metabolites. Coupled with a new solid-phase extraction technique, large-volume injection GC/MS/MS and chemical ionization (CI) has been used to analyze nitrosamines in drinking water.

Background on several of these compound classes is provided below. 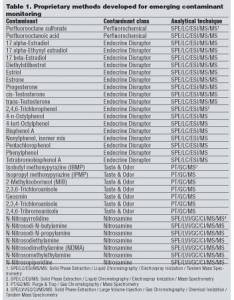 • Perfluorochemical testing: Perfluoro-chemicals are an emerging class of organic contaminants of global concern. PFOA and PFOS are two primary PFCs which have been found in various waters, human blood and a number of species of wildlife including fish and marine mammals. PFOA and PFOS are reportedly persistent in the environment and bioaccumulate with adverse health effects to wildlife and, potentially, humans. According to U.S. EPA’s report,2 PFOA is a likely human carcinogen and can remain in the human body for up to four years. Toxicity tests have raised concerns about potential developmental, reproductive and systemic effects of PFOS.

Humans and wildlife are exposed to these contaminants from several sources. One primary source is industrial release. The compounds are used in the manufacturing of Teflon® and other fluoropoly-mers, which have a wide variety of product applications, including stain- and grease-resistant products, nonstick cookware and fire fighting foams. PFOS was a key ingredient in Scotchgard™ fabric protector. PFOA is a by-product in the manufacturing of fluorotelomers that are used in the manufacturing of fire fighting foams, personal care and cleaning products, food packages and stain-repellent coatings. PFOA is also a potential biodegradation product of fluorotelomer alcohols.

• Endocrine disruptor testing: Endocrine disrupting chemicals include synthetic and natural hormones such as estrogens; phenols such as nonylphenol resulting from the degradation of nonylphenol ethoxylates; surfactants; pesticides and metals. These chemicals can potentially interfere with the endocrine system and may result in adverse health effects for humans. These compounds have been found in a variety of waters.
• Taste and odor compound testing: Taste and odor compounds are typically not considered to be a health risk but can diminish the aesthetic quality of drinking water. For example, naturally produced chemicals geosmin and MIB (2-methylisoborneol) can produce earthy/musty tastes and odors in water at extremely low concentrations.
• N- nitrosodimethylamine (NDMA) testing: Nitrosamines, particularly NDMA, have been found in drinking water. NDMA has been found to cause cancer in laboratory animals. While U.S. EPA does not currently regulate NDMA, California’s Department of Health Services has established a notification level of 0.01 parts per billion (ppb).

Conclusion
The advancements in development of analytical technologies have allowed laboratories and other environmental research groups to analyze for more contaminants with greater specificity and sensitivity. Contaminants including pesticide degradation products, antibiotics, algal toxins such as Microcystin-LR and chemical warfare agents can now be analyzed effectively.

These new technologies also provide the opportunity, in many cases, to consolidate different methods into one method. This method consolidation can make the analysis more efficient and cost effective. Further, these technologies are being applied to new drinking water regulations such as the UCMR2.

About the author
Laura Snell is a Marketing Analyst for the Water Program at Underwriters Laboratories Inc. (UL) where she has worked for 11 years. Before joining the marketing department, Snell was a Senior Project Manager for UL’s Drinking Water Laboratory (formerly Environmental Health Laboratories) where she assisted public water systems with safe drinking compliance. As a marketing analyst, her responsibilities include market research, strategy and planning, oversight of various marketing tactics including development of marketing materials as well as implementation of brand strategy.

About the company
The proprietary methods discussed in this article were developed by UL’s Drinking Water Laboratory, certified in 48 states and Puerto Rico, and one of the first laboratories certified under the National Environmental Laboratory Accreditation Program (NELAP). With nearly 20 years of experience in analyzing water samples, the laboratory remains at the forefront of analytical testing for Safe Drinking Water Act (SDWA) compliance. It has a dedicated R&D department that assists in bringing new U.S. EPA methods on-line, as well as developing in-house methods to analyze for emerging contaminants in drinking water. UL’s Drinking Water Laboratory offers two unique services, the Emergency Response Program and Private Well Water Testing. Contact Customer Service at UL’s Drinking Laboratory toll free within the U.S. at 1-800-332-4345, or visit www.ul.com/water.