Introduction
A study by a manufacturer and The University of Alabama in Huntsville found advanced oxidation processes (AOP) to be highly effective in killing bacteria that create harmful biofilms in pools, spas and jetted tubs and are a health risk in recreational water. As scientists continue to focus on biofilms, methods of destroying and preventing them such as AOP are rapidly evolving.

In this article, AOP is defined and explored, including its ability to prevent illnesses linked to recreational water such as Legionnaires’ disease, Hot Tub Lung and Hot Tub Rash. A recent study on the efficacy of an advanced oxidation processor in purifying recreational water heavily inoculated with E. coli is also reviewed.

Biofilms
Bacterial biofilms are slime that may consist of several types of bacteria. One common example of a biofilm is the plaque that forms on teeth. In technical terms, bacterial biofilms are highly interactive, ubiquitous ecosystems consisting of individual bacterium bound to a foreign surface by a complex matrix. The plaques are formed by way of extracellular polysaccharides, which are complex, sticky sugar chains located on the outer part of the bacterial cell. These sugar chains are one of nature’s strongest glues. These glues weave the bacteria together and attach them to surfaces.

There is a complex method, or order, in the formation of a bacterial biofilm. Biofilms start with an individual bacterium or planktonic cell. These planktonic cells may be thought of as the building blocks for biofilms. A planktonic cell is an individual free-floating bacterium (in the body of water or circulating through the plumbing) that has yet to adhere to any surface. In a circulating water system, bacterial cells adhere to the surface of the plumbing system by way of their outer sugar chains. As these cells accumulate, they begin to form small groups called microcolonies. At this point, the outer sugar chains of individual cells begin to adhere to one another. By adhering to one another, planktonic cells mesh together, forming a more complex structure. Furthermore, surface attachments become much stronger. This sequence of events leads to a highly structured and organized ecosystem that is self-sustaining and provides a continuous source of contamination.

The backbone of this structure and organization are the outer sugar chains of the bacteria. In addition to cell and surface adhesion, the ‘glue’ also forms a matrix. Within the matrix are channels that allow for the passage of water containing nutrients. Polysaccharide matrixes also form a protective barrier for organisms within the biofilm. Biofilms are not just limited to bacteria: yeasts, fungi and protozoa are also common inhabitants. There is also interaction of viruses with biofilms (enteric viruses, bacteriophages, etc). 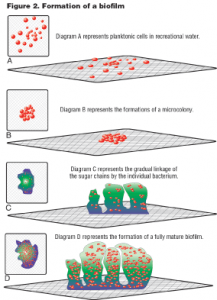 The water in pools, spas and jetted tubs can harbor bacteria such as E. coli, Legionella pneumophila, Pseudomonas aeruginosa, Mycobacterium avium, Streptococcus and Salmonella. These organisms cause a variety of illnesses in humans. Within a short time, bacteria may accumulate in the plumbing of any improperly sanitized pool, spa or tub, thus resulting in the formation of a biofilm. The bather or swimmer inadvertently leaves behind most of these bacteria along with organic matter (sweat, oil, dead skin cells, etc.). With the organic matter or ‘bacterial food’ in circulation, biofilms proliferate. Furthermore, the dark and moist environment of the plumbing accelerates biofilm growth.

Eventually, portions of biofilms detach by the force of flowing water and/or by natural breakup. Infectious microorganisms then come into contact with the bather, causing a spectrum of illnesses that can be acquired from breathing, contacting or swallowing water contaminated by bacteria.

Contact with this contaminated water may cause infection of the lungs, skin, eyes, ears, hair follicles, intestines and urinary tract. More serious illnesses include Pontiac fever and Legionnaires’ disease, the latter of which is a severe and potentially lethal form of pneumonia. Legionella, which causes Legionnaires’ disease and Pontiac Fever not only infects individuals in water, but also can be transmitted to individuals in close proximity. This occurs due to the bacteria becoming airborne by way of aerosol mists produced in spas and jetted tubs. Additionally, a condition referred to as Hot Tub Lung is spread via aerosol mists carrying bacteria that invade the lungs causing serious respiratory complications, which can last for months. There is a documented cases of entire families acquiring Hot Tub Lung. 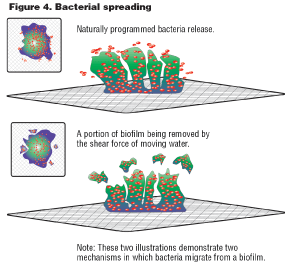 Advanced oxidation processors produce powerful sanitizers and oxidizers called ozonites that are created from ozone after it has undergone a series of chemical reactions. Ozonites rapidly destroy unwanted bacteria and organic matter found in pools, spas and jetted tubs.AOP can kill bacteria on contact, thus sanitizing the plumbing and body of water in a pool, spa, or jetted tub. A recent test done by the same manufacturer and The University of Alabama in Huntsville found a processor able to sanitize a jetted tub heavily contaminated with E. coli in a surprisingly short period of time.

About the test procedures
The microbiological tests were performed with the assistance of Dr. Gopi K. Podila, Department of Biological Sciences, The University of Alabama in Huntsville in March of 2006. The first sample of contaminated water taken was not introduced to AOP. All 20 samples went through serial dilution, were plated and incubated overnight at 37 degrees Celsius (66.6 degrees Fahrenheit). The following day, each plate was counted for viable bacteria.

Test setup and results of AOP 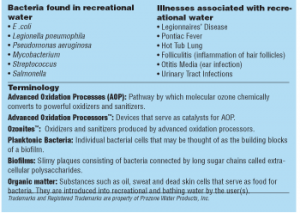 A 75-gallon tub (283.91 liters) with six adjustable jets was used with this test. The tub was filled to capacity and a culture of E. coli cells concentrated at 1000 cells/ml was introduced into the tub. Upon addition of bacteria into the tub, the processor (which serves as a catalyst for AOP) was turned on and water samples were taken over a 20-minute period (at 20-second intervals for two minutes, 30-second intervals for five minutes and one-minute intervals for the next 13 minutes). These samples were taken, grown on trypticase soy agar plates and incubated overnight then counted the next day. Bacteria could no longer be detected after a three-log reduction.

Results and analysis of AOP
This demonstrates how AOP eliminated one type of potentially harmful bacteria introduced into recreational water. This test did not include all types of bacteria that may be present in recreational water. If E. coli or similar types of bacteria are present in the water, AOP can be a useful part of a long-term treatment plan for keeping that water safe.

About the product
The product tested was Prozone’s Advance Oxidation Hybrid Generator which forces ozone to react via a free radical pathway with activation by UV radiation. The model PZ6C, tested and discussed here, is available from Prozone Water Products, located at 2610 6th Street, Huntsville, Alabama. For more information visit http://www.prozoneint.com or contact the sales department at 1-800-632-6462.

D. Kevin Caskey is a Project Manager and microbiologist for Prozone Water Products. He holds a Bachelor’s and Master’s degree in microbiology. Prior to rejoining Prozone, where he was originally a Project Manger, he worked at Vanderbilt University in Nashville as a Lab Manager while conducting his own research projects. He can be reached at 256539-4570 or kcaskey@prozoneint.com.