From Dreaded Pollutant to Primary Disinfectant in Two Decades!

To the American public today, ozone is a pollutant viewers are warned about during the TV weather report. News broadcasts warning of high ozone days, when folks are told to limit outdoor physical activities, occur weekly in all major U.S. cities. The Federal Clean Air Act of 1977 lists ground-level ozone gas as a primary indicator of excessive air pollution and smog. The major contributor to ground-level ozone is automobile emissions. When car exhaust contacts sunlight, ozone gas is produced. At high levels, this smog-generated ozone irritates the respiratory system, causing sore throats and creating an uncomfortable sensation in the lungs. For those afflicted with emphysema or bronchitis, a high-ozone day can result in a visit to a hospital emergency room. However, unknown to most is the fact that these very same cities, plagued with ground-level ozone pollution, are using that same ozone to purify their drinking water. When dissolved in water, ozone gas kills microorganisms, then reverts to oxygen (its parent molecule), producing drinking water that is free of pathogens without the bitter aftertaste produced by chemical disinfectants. While safe in that application, ozone gas can leave the systems and contribute to ground level ozone concentrations if correct precautions are not taken.

In the city of Los Angeles, Calif., for example, ground-level ozone levels often climb to 360 ppb, almost five times higher than the federal air quality standard of 80 ppb set by the U.S. Environmental Protection Agency (U.S. EPA). Yet the city uses thousands of pounds of ozone per day to meet the same agency’s guidelines for drinking water disinfection. Thousands of people having a glass of that water are enjoying fruits and vegetables sanitized with (you guessed it) ozone.

Can a major pollutant that makes our throats sore and our heads ache also be a primary barrier against pathogens in the water we drink and the food we eat? U. S. EPA, the Food and Drug Administration (FDA) and the U.S. Department of Agriculture (USDA), agencies whose primary function is to protect the health of our citizens, all say yes to ozone as a primary disinfectant for drinking water and food sanitation, as did the majority of European countries over a century ago.

Ozone’s historical legacy
Christian Freidrich Shonbien first isolated the pale blue gas in 1840. Electrically generated by passing clean, dry air through an electrode, the recombination of oxygen molecules, cleaved by an electric spark, was found to contain three oxygen molecules and to have a short life, decomposing back to molecular oxygen in less than 20 minutes

By 1906, the city of Nice, France began using ozone as its primary disinfectant. That same year, the water works of Jersey City, N.J., was looking for a reliable method to disinfect public drinking water. The city was aware of the use of ozone by Nice, but had concerns about the complexity and cost of the ozone generators. The city instead turned to the use of sodium hypochlorite, a liquid derivative of chlorine gas, for disinfection of the water supply. From that date forward, chlorine became the primary disinfectant for drinking water in the U.S.

Ozone use was preferred over chlorine because the latter left a chemical residual that would harm the tank inhabitants. Instead, dissolved ozone disinfected the seawater, leaving behind only additional oxygen after its reaction with the organic and inorganic compounds present. To prevent ozone from escaping, SeaWorld installed a piping and blower system that pulled any escaping ozone gas through an ozone destruct, a device that uses heat and a catalyst to force the gas to revert to pure oxygen (photo 1).

As an added precaution, a gas monitor was installed to continuously ‘sniff the air’. In the event of an ozone gas discharge, the unit alarm activates and shuts down the ozone generator (Photo 2). Today, all

ozone water treatment systems use a similar method to ensure that no ozone gas escapes—all removed gas is sent to an ozone destruct module.

SeaWorld soon discovered that the injection of ozone gas did quite a bit more than kill bacteria; it also aided filtration by causing small particles to come together to form larger, easier-to-filter solids. Today, all U.S. aquariums and zoos use ozone gas to disinfect the water in exhibits and to provide the exceptional water clarity and blue color we associate with these facilities (Photo 3).

After many years of research and petitions by the fledgling U.S. ozone industry, the FDA issued a final ruling that allows for the use of ozone as a bottled water disinfectant. The ozone industry experienced another growth spurt as a result and from that point on, the use of ozone in the U.S. grew steadily, paralleling the growth of the success of bottled water. Meanwhile, chlorine disinfection continued to be the mainstay for U.S. cities, with only one or two municipalities using ozone systems for drinking water.

An investigation by the U.S. Centers for Disease Control (CDC) discovered Cryptosporidium parvum, a single-celled, parasitic protozoan that commonly infects cattle was the pathogenic organism responsible. In its infective stage, the organism exists as a three-micron sized oocyst, approximately half the size of a red blood cell (Photo 4).

Cryptosporidium enters a drinking water system through the water plant intake from contaminated rivers, lakes and streams. The source of the parasitic contamination in these surface waters can often be traced back to runoff from farming areas having infected cattle that shed the parasite in fecal matter.

Individuals infected with the parasite may suffer severe abdominal cramps and watery diarrhea. Nausea, vomiting and a low-grade fever often accompany the infection. In a healthy person, the symptoms and infection clear up in a few days. However, for those weakened by an existing illness, especially those with AIDS or cancer or anyone taking immunosuppressive drugs, the symptoms will persist and can eventually lead to death.

Following the Milwaukee, Wis., outbreak, extensive research2 revealed that the Cryptosporidium oocyst was highly resistant to chemical disinfectants, making chlorination of the drinking water an ineffective barrier against human infection. The parasite was found to be healthy and capable of infecting humans after soaking for 24 hours in bleach. The same research revealed that ozone gas dissolved into a water system would readily penetrate the hard protective covering of the oocyst. A dissolved ozone concentration as low as 0.5 ppm would destroy the pathogen in less than 10 minutes.

The outbreak of Cryptosporidiosis in Milwaukee resulted in significant changes by the U.S. EPA in drinking water regulations and a change in attitude about ozone. By 1998 there were 264 ozone disinfection systems installed at municipal drinking water plants, many in small communities with flow rates less than 700 gpm (Figure 2). 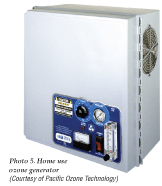 It is difficult to track the growth of residential units sold to date; however, cities continue to install ozone as an effective weapon against Cryptosporidium parvum. In recent years, the cities of Las Vegas, Nev.; Dallas, Texas; Detroit, Mich. and many others have installed ozone disinfection systems for potable water.

Ozone invades our grocery stores
The rapid growth of municipal ozone disinfection systems helped finance continued research on the use of ozone in other applications. One of the areas of keen interest was the potential to use ozone to disinfect foods. Because ozone decayed back to oxygen without leaving a chemical residue, many considered ozone a superior alternative to the use of chlorine or other chemical additives.

The culmination of that research occurred in 2001, when both FDA and USDA approved ozone as an antimicrobial agent on all foods, including meat and poultry. Testing showed that exposure to ozone of certain fruits both disinfected their surface and caused the fruit to release an enzyme that retards spoilage. Strawberries, for example, have an extended shelflife when exposed to ozone

(Photo 6) and green peppers benefit from extended freshness when treated

Cities across the U.S. are installing ozone systems at a rapid rate in order to comply with U.S. EPA regulations for removal of Cryptosporidium from drinking water supplies. Wineries are using ozone to disinfect oak barrels and wash down plants to remove mold spores and bacteria. Commercial swimming pools are benefiting from the water clarity and clean smell provided by this exceptional disinfectant. After more than 150 years of development, ozone generation is finally making a positive impact, purifying the water we drink, the foods we eat and the swimming pools we visit at hotels and resorts and even homes across our nation.

About the author
Jim Jackson is the National Sales Manager for water and wastewater systems at Mazzei Injector Corporation and an active member of the International Ozone Association–Pan American Group. He has been a water treatment professional for 26 years and has been working in the ozone industry since 1994. Jackson received a bachelors of science degree from Wayne State University in Detroit, Mich. He can be reached at jim@mazzei.net. For more information about ozone, visit International Ozone Association at www.io3a.org.