In keeping with other recently published discussions of home RO, they reveal both their lack of technical competence about this technology (they claim that RO ‘pulls’ water through a membrane and continue to make a big issue out of the ‘water wastage’), claiming that all of these devices operate at what calculates out to be 17 percent recovery. They also state that they “…require professional installation”. On the other hand, they do point out that reverse osmosis is “… very effective and can filter out more obscure pollutants like arsenic.” (The choice of the word obscure is interesting.)

The reality is that the residential RO business in the U.S. continues to be steady, with new installation sales at about 300,000 units per year (new home starts are 2.8 million per year).

Lately, there has been significant interest in whole-house microfiltration (MF) and ultrafiltration (UF) systems touting their microorganism removal properties. Interestingly, this is a case where an overseas market is leading the way for the U.S. in residential water treatment—for years, the Japanese consumer has used tap-mounted microfiltration elements for bacteria removal. Now, several manufacturers have introduced whole-house MF and UF systems into the U.S. marketplace. There are at least two currently offering polymeric capillary filter devices and one with a ceramic MF product for point of entry (POE) treatment. One large U.S. manufacturer is offering a capillary fiber cartridge specifically as the final filter on POU systems.

To paraphrase an old saying, “Perception is not everything, it’s the only thing!”

Certainly, the American public is very skeptical about the consistent quality of their drinking water and media coverage has done much to promote this skepticism. Of course, the problem is that the typical consumer is clueless about what’s in his or her water that could be a health risk, as well as what technology is best to mitigate that risk. As a result, the consumer is significantly influenced by claims made by retail marketing organizations, homebuilders, architects, etc.

The critical question here is, what is the consumer getting for any technology investment? To answer that, we should first address the issue of water contaminants and then compare the above two choices (MF/UF versus RO). 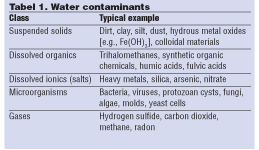 Within the repertoire of United States Environmental Protection Agency (U.S. EPA) defined primary (health related) contaminants, it is possible to subdivide them into the general categories of microorganisms, inorganic compounds and organic chemicals (as well as several others).

The ‘Milwaukee Outbreak’ of 1993 resulted in the expenditure of significant energy and resources to establish new standards for the control of waterborne organisms, specifically Cryptosporidium parvum. The most recent Safe Drinking Water amendments (Long Term 2 Enhanced Surface Water Treatment Rule) are very complicated, but basically require at least 99 percent removal of this oocyst for normally unfiltered surface water supplies.

Of course, since protozoan cysts and oocysts, as well as the other microorganism contaminants (bacteria, viruses, algae, etc.) are also suspended solids, it is possible to generalize that any technology designed to remove suspended solids represents a possible treatment, provided that its pores are sufficiently small. Keep in mind, though, that the MF/UF systems on the market today are only effective in removing microorganisms, suspended solids and perhaps very large dissolved organic contaminants.

The other classes of contaminants (inorganic and organic chemicals) require more aggressive treatment technologies designed to remove dissolved contaminants, such as adsorptive media and RO.

The good news is that the U.S. EPA has done a commendable job of identifying those specific contaminants that are dangerous. It is hard to question the scientific scrutiny behind the establishment of MCLs (maximum contaminant levels) that have been established. The bad news is that when changes are made, they are almost always lowered, so consuming water that contains just under the MCL of a specific contaminant today may mean that a consumer has been putting his or her health at risk tomorrow. In addition, these levels, which are supposedly based on pure science, often appear to be influenced by politics. A case in point relates to the arsenic rule. Scientific data persuaded the agency to lower the MCL from 50 micrograms per liter to 10 micrograms per liter at the end of the Clinton administration; wherein the Bush administration U.S. EPA appointees said there were not enough data to support an MCL that low, resulting in a lengthy delay. The rule was eventually enacted, only to now be questioned by some who believe that the MCL is too low.

The point is that in spite of the fact that municipal drinking water must meet the U.S. EPA drinking water standards, most supplies contain at least some of the regulated contaminants, albeit at a concentration level below the MCL. As new regulations are promulgated, many of them involve lowering the existing MCL for a particular contaminant and there is every reason to believe that this trend will continue. In addition, the scientific community is beginning to become very concerned about the presence of endocrine disruptors in our water supplies, which, though in very low concentration (parts per trillion), are associated with possible reproductive and birth defects in humans. The MF and UF technologies on the market today will not remove any of these contaminants.

An article in the March 2006 issue of WC&P, “RO is Not Enough!” summarized testing performed on POU RO systems which underscored the inability of this technology to remove bacteria and viruses and extolled the virtues of a UF postfilter cartridge. The authors noted that virus removal in their RO testing was generally better than bacteria removal, even though a typical bacterium is significantly larger than a virus.

A discussion into the possible mechanisms for both bacteria and virus passage through an RO membrane results in more questions than answers. Some experts believe that it may be due to feedwater bypassing O-rings, leaks in adhesive seals or imperfections in the membrane polymer itself. Other experts believe in the phenomenon of ‘bacterial grow-through’. Very controversial, this theory is that bacteria growing on the membrane surface can somehow initiate growth on the other side of the membrane, leading to contamination of the permeate stream. Because bacteria are viable (alive) and will grow anywhere and under virtually any conditions, another school of thought is ‘back contamination’, wherein bacteria grow back from the faucet into the storage tank and/or membrane element.

The discussion of bacterial grow-through leads to many more questions:

Consumer Search notwithstanding, when the benefits of POU RO are understood and properly applied, it is obvious that this technology is not a thing of the past!

About the author
Peter S. Cartwright, President of Cartwright Consulting Co., Minneapolis, is a registered Professional Engineer in Minnesota. He has been in the water treatment industry since 1974, has authored almost 100 articles, presented over 125 lectures in conferences around the world and has been awarded three patents. Cartwright has chaired several WQA committees and task forces and has received the organization’s Award of Merit. A member of the WC&P Technical Review Committee since 1996, his expertise includes such high technology separation processes as reverse osmosis, ultrafiltration, microfiltration, electrodialysis, deionization, carbon adsorption, ozonation and distillation. Telephone: (952) 854-4911; fax: (952) 854-6964; email: CartwrightConsul@cs.com or visit his website www.cartwright-consulting.com.