Introduction
Supplying high quality drinking water to the world’s consumers in their homes and workplaces has grown into a thriving billion-dollar business over the past 40 years. While consumers might be reminded of all those bottles on the shelves of merchandisers promising purity and health, WC&P readers are more familiar with the parallel aspect known as point of use (POU) water treatment. This article discusses a new and historically significant milestone in the development of this product category—one that is expected to have both a timely and permanent impact on the market. 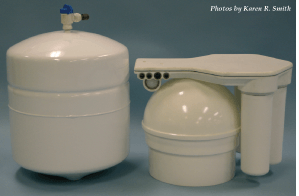 POU reverse osmosis
POU devices take just about as many forms as other kitchen appliances. The decision to install a POU device depends on the consumer’s requirements, expectations, technical awareness and budget. In the early days of the business, most POU devices were little more than a vessel that was filled with granules of activated carbon (GAC). Water passed through the GAC and exited tasting a whole lot better. Over the years, the product variety, technology and sophistication inched forward to provide consumers with every possible level of water purity and user friendliness. We now have ‘drinking water appliances’.
One of the more recent and successful POU product categories is the reverse osmosis (RO) drinking water appliance, which debuted in the marketplace in the early 1970s. This product, typically installed under the kitchen sink, provides a separate dispensing tap for RO-treated water. POU RO devices brought a new level of technology to consumers, allowing them to cope with the growing barrage of impurities in tap water and, for the first time, approximate the superior taste and purity of bottled water with neither the inconvenience nor the high cost.

Air-on-water
The first true undersink POU RO device was invented in 1970 by Don Bray, a recognized scientist in the field of RO membrane technology*. Back then, RO was the new kid on the block and very few water treatment dealers had even heard about it. Bray’s patented POU RO is commonly referred to as the ‘air-on-water’ design, owing to the fact that the membrane-processed water is made slowly and stored in a tank that includes a separate compartment for air. As the processed water enters the tank, it compresses the air which becomes the motive force to dispense the water to the user. The primary shortcoming of this design can be summed up in terms of its water-wasting inefficiency. In RO, only a portion of the water used becomes available for drinking, typically 15 to 33 percent (the recovery to atmosphere). The rest goes to carrying away mineral salts and other impurities from the surface of the membrane. In the air-on-water designs, as the tank gradually fills, the recovery diminishes significantly—to as little as five percent in some cases. 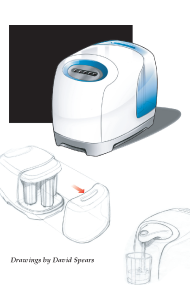 Even back then, Bray knew there was a more correct (i.e., theoretically better) and efficient way to apply RO technology to POU devices. In fact, it is provided in his patents. He recognized that as innovative as his POU RO invention was, it had some inherent compromises that meant thousands of gallons of water wasted each year for the owners of these inefficient devices. So why didn’t Bray do something about? For the simple reasons that it appeared to require a more complex design that was much more challenging to manufacture and there was little interest in (or need for) water conservation at that time. 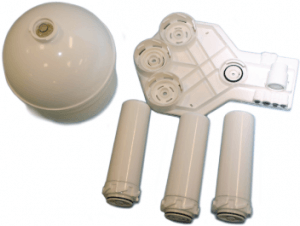 During the following decade, the POU RO product category started to proliferate in the market and so did the ‘better mousetrap’ inventors who sought to overcome the inherent limitations of the air-on-water design with new creations, notably one called the ‘water-on-water’ design. This group included such prominent corporations as Kodak, Teledyne and Hydrotech. The idea of this new configuration was simple enough: use existing city water pressure to dispense the RO-processed water. But the successful implementation of this concept proved to be as daunting as flight was at the turn of the century.

One by one, the water-on-water designs were offered into the marketplace, but virtually all had to be given a well-deserved burial. Each water-on-water design exhibited some fatal flaw and there was a lot of trading of one problem for another, ad infinitum. Make no bones about it, this was a truly difficult engineering challenge. The ultimate proof of this (and somewhat of a vindication to those inventors) is that the original inefficient air-on-water design continues to dominate the POU RO market to this day.

One water-on-water system, however, the Truman Tyler/Bob Sprague/Mike Beall design of 1977, had more staying power than the rest. It was a complicated system with numerous idiosyncrasies, but for some dealers the positives outweighed the negatives. Over the years, there was much design tweaking; ultimately, its growing complexity left much to be desired. Nevertheless, the system was kept alive by Beall’s son Tim, although it never accomplished major market penetration.

New approach
The younger Beall gained extensive knowledge and experience of water-on-water design and became a recognized authority on the subject. Equally important, he explored novel system assembly concepts which could take advantage of a low cost, high-performance POU RO—if and when he could overcome the remaining technical hurdles.

Enter the unknown: an independent, self-funded inventor who took an interest in the POU water business. He concluded that success awaited him if he could make a simple and reliable water-on-water POU RO system. He studied all the shortcomings of previous system designs and took a fresh approach. The short version of his story is that while his system never materialized as an appliance in the marketplace, he created a water-on-water control valve so magically simple that it almost defies explanation. It consists of four parts and only one of them moves—a true breakthrough. Previous control valves were intricate and complex, having as many as 28 parts.

The inventor realized he had something special and sought to explore options. He approached Robert and Jack Slovak, the founders of Water Factory Systems, who proceeded to evaluate the simplified control valve and explore how and where to use it. Several years of lab and field testing passed before the ingredients would finally come together and make a breakthrough in POU RO technology a reality.

One day Robert Slovak and Tim Beall ran into each other at the 2004 WQA convention in Baltimore and spent some time catching up. Soon enough, they realized they had significant goals in common. Beall was still looking for a market partner for his novel POU RO system concepts; Slovak was aware that the breakthrough control valve was the cure for decades of frustration with water-on-water designs. Destiny, perhaps? The two realized they were on the same plane to Los Angeles and decided to explore this synergy. By the time they landed, they immediately agreed to pursue a new venture which finally brought all the pieces of the puzzle together—Beall’s water-on-water tank design and system concepts combined with the novel water-on-water control valve. The result is the next step for POU RO.

Why water-on-water again; why now?

Part of the answer is the proverbial mountain to climb—a quest left undone by some of the most recognized people in the POU RO industry. An opportunity to make the ultimate product in its category. More significantly, there is the practical side: to offer a POU RO product to the industry that overcomes the shortcomings of current POU RO devices. Due to the increasing pressure as the tank fills: high overall water waste factor (low recovery); compromised TDS rejection; uneven flow of the processed water in certain circumstances; larger, more costly components (membrane and tank).

From a purely business perspective, this new marriage of technical designs also affords the lowest manufacturing costs of any respectable POU RO on the market, allowing it to be a viable participant at any market level, from individual dealer to mass market. The high-tech at a low price goal was accomplished.

Benefit of the water-on-water system 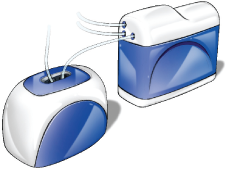 This new POU RO can make a big difference in almost every aspect of every industry that uses these products. Let’s take a look at the advantages to water treatment providers (traditional dealers, DIY channel and utilities), installation and service technicians and consumers.

Performance advantage
With the new control valve there is no back pressure on the membrane during water production. This single superior design feature results in a cascade of other practical advantages.

Performance data
This test (see Table 1) illustrates the filling of a partially full tank to shutoff. The water-on-water design will always yield a high efficiency while the air-on-water design will vary depending on the usage pattern. If, for instance the air-on-water system is used primarily between the on and off points of this ideal control valve, the efficiency would be closer to 15 percent. With a less-than-ideal control valve, that efficiency can be much less.

Operation advantages
Water-on-water will deliver treated water to the customer at full flow all the time. There is no decline of flow and pressure as with conventional air-on-water designs. This feature creates the following advantages for both sellers and users of the product:

Manufacturing cost advantages
The new novel configuration, primarily the result of compact water-on-water operation, combines all the essential components into a single integrated unit that fits neatly and compactly together. There is an immediate payoff in terms of economy of materials and assembly.

The new device was also designed to be a convertible POU RO system—a special kit allows it to be used as a countertop system as well. International markets should find the sealed storage tank a great feature and domestic sales groups will be able to use the countertop system as a loaner for clients to ‘test drive’ the water (and the system) before they buy.

Next-RO principals are Tim Beall, one of the preeminent early developers of water-on-water POU RO devices with over 28 years of experience in every aspect of POU RO water treatment design, installation, marketing and sales. His water-on-water system concept is the basis of the new configuration and he leads development for the group. Robert Slovak, co-founder of Water Factory Systems, is the author of the definitive text on installing POU RO devices, which is used by the WQA in their training programs. Michael Baird, co-founder of Hydro-Flow, a major manufacturer of conventional and innovative POU filters, is  a reknowned consultant on filter and POU device design, manufacturing and assembly. Jack Slovak, co-founder of Water Factory Systems is a recognized authority on POU RO design, heads business planning and operations. David Spears, the founder of Spears Design, has 15 years of experience in membrane water treatment system design, product design, computer graphics and electronic monitoring device development. Contact the corresponding author at RobtSlovak@aol.com or contact Next-RO, 217 South Pacific Coast Highway, Redondo Beach, CA 90277. Tel: (310) 379-0610; Fax: (310) 634-1841; Email: info@next-ro.com; Website: www.next-ro.com.

*To be historically accurate, Culligan developed and patented the first under-cabinet POU RO with an open-to-air storage tank in the late 1960s.