The systems themselves are relatively complex. Typically consisting of pre- and post-filters, RO membranes, automatic shut-off valves, storage tanks and faucets, they involve an extensive combination of components working together to provide sophisticated water treatment capabilities. The test methodologies developed for evaluation of the contaminant reduction capabilities of these systems are based closely on the nature of the technology. This article describes the test methods, as well as the rationale and philosophy adopted by the NSF Joint Committee on Drinking Water Treatment Units, that led to the requirements behind the methods.

RO membranes rejections
RO membranes allow water to pass through, but reject ionic contaminants dissolved in the water. The efficiency of rejection depends on the membrane itself, the net driving pressure of the RO system, the amount of crossflow, the electrical charge of the ions, the size of the ions, temperature, water chemistry and other factors. In terms of the ions, the smaller the electrical charge and the smaller the ionic size, the more easily they can pass through the membrane. The greater the charge and the larger the ionic size, the better the membrane is able to reject them. Keeping in mind this fundamental functionality, the Joint Committee determined that all RO systems must be evaluated for basic ability to reject ions. In order to make the test repeatable and conservative, the Joint Committee elected to use a solution of 750 mg/L sodium chloride in deionized water for this evaluation.

Sodium chloride is conservative because sodium is monovalent (Na+), as is chloride (Cl–), when dissolved and dissociated in water. Also, the ions are relatively small in ionic size. The use of sodium chloride leads to conservative and repeatable tests, because it involves the addition of only two relatively small, monovalent ions to deionized water. This basic evaluation test with deionized water containing only sodium chloride is known as total dissolved solids (TDS) reduction. All RO systems conforming to Standard 58 must perform the TDS reduction test with at least 75 percent reduction of TDS.

Other contaminants can also be tested
Many metallic and some non-metallic contaminants are ionic in nature, similar to sodium chloride. This means that they can be effectively rejected by RO membranes. A number of these, such as chromium, lead and perchlorate, are concerns because high concentrations of them in drinking water can lead to negative impacts on the health of those consuming them. As such, Standard 58 contains requirements for testing contaminant reduction performance of a number of these substances (see Figure 1). 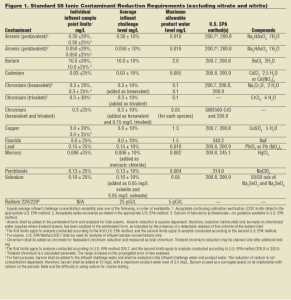 RO membranes can also serve as an effective mechanical barrier. Standard 58 also contains requirements for testing for claims of the reduction of asbestos, cysts and turbidity.

A week-long protocol
Under NSF/ANSI 42 and 53, media filters are tested based on their rated capacity. A volume of contaminated water equal to or greater than the manufacturer’s rated life is passed through the filter, to make sure the filter will perform throughout its life. RO membranes can last for several years, as long as they are protected through use of the correct type of properly maintained pre-filters. This long life makes testing an RO system through the entire replacement cycle of the membrane impractical.

So instead, RO systems are tested under a week-long protocol that subjects the system to a variety of usage patterns. Complete tank draws, partial tank draws and a stagnation period are evaluated through 13 different sample points (the TDS reduction test has 14 sample points, as an additional sample point at 16 hours of operation is included) over the course of the week-long protocol. For details on the sampling protocol, see Figure 2. 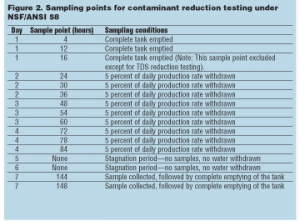 For systems that do not include a storage tank, the protocol is similar.

The system production rate is measured when filling a tank from a completely empty starting point, as well as when filling a tank from the point where the automatic shut-off valve first turns on, with the TDS reduction test water. The daily production rate is an average value based on these two operational conditions, expressed as ‘volume per day’ (volume per 24 hours). For systems that do not include a storage tank, the procedure is similar.

No help from the filters
A study conducted by NSF in the late 1990s indicated that carbon pre-filters and/or post filters could assist the RO membrane in reducing the concentrations of certain contaminants. Most notable of these was mercury. The test protocol in Standard 58 is a week-long protocol designed to evaluate membrane performance and is not at all appropriate for evaluation of performance of media filters. For this reason, the Joint Committee changed Standard 58 in 1999, such that all pre- and post- filters must be removed from the system prior to testing for contaminant reduction performance. As a result of this change, manufacturers previously claiming mercury reduction were required to retest their systems, with the pre- and post- filters removed. None of the tests were successful and to this day there are no NSF certified mercury-reduction claims on any RO system.

Nitrate/nitrite reduction
Nitrate and nitrite are unique contaminants that exist in equilibrium—there is always some of each present. The balance of the equilibrium can shift depending on water chemistry. For this reason, the United States Environmental Protection Agency (U.S. EPA) regulates the contaminants together. Based on this interrelated chemistry, the Joint Committee determined that the two must be tested together and testing must be successful for both in order to make a claim. Whenever nitrate reduction is claimed, nitrite reduction must also be claimed. Details of this claim are included in Figure 3. 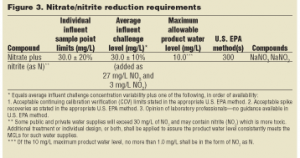 The technology influences the test methods
RO is a unique water treatment technology, with unique and specific capabilities and limitations. The NSF Joint Committee on Drinking Water Treatment Units recognized these capabilities and limitations and used this recognition to specifically design the test protocols in Standard 58 to challenge the technology. By setting specific pressures, operational requirements, product configurations and sampling schemes, the protocols create conservative tests of these systems to verify their performance.

About the author
Rick Andrew has been with NSF International for seven years, working with certification of residential drinking water products. He is currently the Operations Manager of the Drinking Water Treatment Units Program, after having served as the Program’s Technical Manager for four years. His previous experience was in the area of analytical and environmental chemistry consulting. Andrew has a bachelor’s degree in chemistry and an MBA from the University of Michigan. He can be reached at 1-800-NSF-MARK or email: Andrew@nsf.org