Trihalomethanes (THMs) have been found to be the most wide-spread organic contaminants in drinking water. Trihalomethanes are part of a group of organic chemicals that contain one carbon atom, one hydrogen atom and three halogen atoms. The most common of these halogen atoms responsible for trihalomethane formation in water are bromine and chlorine. 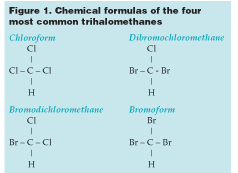 Figure 1 gives the chemical formulae of the four most common trihalomethanes which are formed during chlorination. These are chloroform (trichloromethane), bromodi-chloromethane, dibromochloromethane and bromoform (tribromomethane).

THMs are formed by the reaction of free chlorine with natural organic matter (NOM), man-made organic matter or bromide. The NOM responsible for THMs consists of humic and fulvic acids produced by decaying organic matter. Chloroform is typically found at higher concentrations in potable water than any other THM.

Regulations for the control of THMs in drinking water were first promulgated by the U.S. Environmental Protection Agency (U.S. EPA) in 1979. The maximum contaminant level (MCL) was set at 100 ppb for total trihalomethanes (TTHMs) for systems serving at least 10,000 people. The U.S. EPA revised this rule when it issued the Stage 1 Disinfectants/Disinfection By-Products Rule (D/DBP) in 1998. The D/DBP rule reduced the MCL for TTHMs to 80 ppb. This new lower standard had to be met by the end of 2002 for systems serving over 10,000 people and by the end of 2004 for systems serving fewer than 10,000 people. Some states and industries such as bottlers have limits as low as 10 ppb TTHMs.

Treatment options
Waters that contain high amounts of NOM may be treated with granular activated carbon (GAC) prior to chlorination. The GAC adsorbs some of NOM (humic and fulvic acids), thereby reducing the amount of TTHMs formed upon chlorination.

When designing systems with water that has been previously chlorinated, GAC is used to remove the TTHMs directly. One method employed to determine how long GAC will last removing TTHMs is to perform a carbon isotherm test on the specific water. Exact details on how to perform the test are available in ASTM International test method D 5919, Determination of Adsorptive Capacity of Activated Carbon by a Micro-Isotherm Technique for Adsorbates at ppb Concentrations. The test results are plotted according to the empirical Freundlich equation. As shown in Figure 2, the residual concentration of the THM in solution is plotted on the x axis and the amount of THM adsorbed per unit weight of activated carbon is plotted on the y axis.

Activated carbon has different adsorptive capacities for each individual THM. As seen from Figure 2, the more brominated the THM, the higher the adsorption capacity of the activated carbon. GAC has the highest capacity for bromoform and least with chloroform.

Using the isotherms in Figure 2, one may calculate a theoretical usage rate to determine how long the GAC will last for a specific THM. Let’s assume a water has 0.10 mg/L (100 ppb) chloroform. Using the formula below (see Formula 1) and the chloroform isotherm in Figure 2 the carbon usage rate is calculated.

In this illustration (see Formula 2), granular activated carbon would be consumed at a rate of 0.417 pounds for every 1,000 gallons of water treated. The isotherm curve was conducted under ideal conditions, lacking any background organics that may be present in any given stream. Therefore, the results obtained give the minimum carbon usage rate. Conducting the carbon adsorption isotherm on the actual water to be treated per the ASTM test method would yield more precise performance prediction. The actual water will contain background organics, which may reduce the capacity of the activated carbon for THMs. 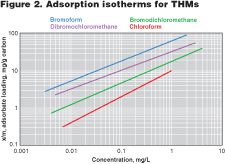 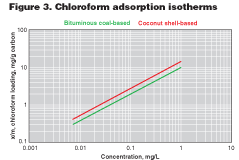 System design
When designing a granular activated carbon system, dynamic factors must be taken into account to achieve the desired performance and fully utilize the capacity of the carbon. For municipal and industrial systems, a minimum empty bed contact time (EBCT) of seven minutes is preferred. Longer times up to 15 minutes EBCT are beneficial to more fully saturate the GAC with THMs. EBCT is calculated by dividing the volume of the activated carbon bed by the volumetric flowrate. Therefore, a one cubic foot carbon bed treating one gallon (0.1337 cubic feet) per minute would achieve an EBCT of (1 / 0.1337) 7.5 minutes.

About the author
Robert J. Potwora is the Technical Director with Carbon Resources, LLC, a supplier of activated carbon products, equipment and services based in Oceanside, Calif. He has over 25 years experience in the activated carbon industry. He may be reached at (760) 630-5724 or email: robert@carbonresources. com