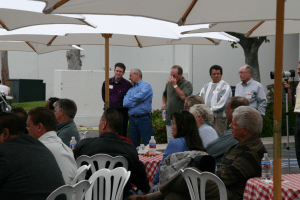 What traveled on wheels, had 162 legs* and consumed 75 pounds of Sheboygen bratwurst? The attendees at Pacific Water Quality Association’s Southern California Barbecue Round Up, that’s what!

A dozen new members have joined the regional association and this was the best-attended event of the year to date. The gathering had a festive air, with the Pentair truck offering hands-on product information, RSI helping owners and employees find cost-effective insurance solutions and Performance Water premiering two new product lines, tents filled with foods and beverages, the grill churning out those amazing brats along with an assortment of other foods, and dozens of umbrella tables for dining and schmoozing. 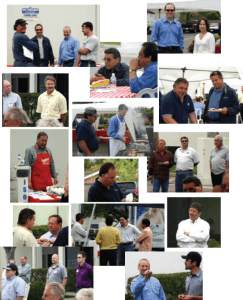 Assemblyman Rudy Bermudez came to speak with the membership, both about his term in the Assembly and his goal of attaining a Senate seat in the upcoming election. It is a hotly contested race and Bermudez is well aware of the importance of the support of industry groups. Arriving early, Bermudez was initiated into the delights of the bratwurst by none other than Mike Mecca, PWQA President. The Assemblyman had never had the pleasure of tasting one before and was delighted by the experience. He and district staff member Jose Sigala remained at the event, circulating amongst the membership and answering questions on everything from water legislation to education. It was a chance to speak one-on-one with an elected official that all appreciated. The PWQA Political Action Committee (PAC) announced a contribution to Bermudez’s senatorial campaign and their best wishes for his success in the race.

Mecca provided a recap of the WQA Aquatech gathering in Chicago for those unable to attend, followed by a legislative wrap up by WQA and PWQA board member Tracy Strahl of Southbay Salt Works. After a brief summary of Legislative Days in Sacramento, PWQA Board Member (and WC&P technical review committee member) C.F. ‘Chubb’ Michaud related the situation at the WHO Calcium/Magnesium in Drinking Water Symposium in Baltimore (see multiple stories, this issue). 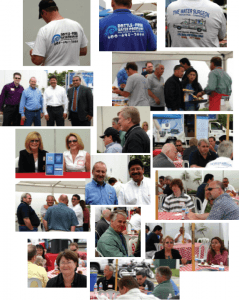 At the conclusion of the barbecue, the regular meeting of the organization’s Board was held. Plans moved forward for the 49th annual convention, to be held this year on the Queen Mary in Long Beach, Calif. (October 23-27). More immediately, members would speak at the Southern California Salinity Coalition meeting, where they had been invited to present this industry’s views regarding salinity management strategies and ongoing initiatives. The success of the joint effort with Inland Empire Utility Authority to replace old, inefficient softeners has led to a relationship of mutual respect and ongoing cooperation. IEUA’s Martha Davis was a welcome guest at the barbecue and had invited the group to participate at the Salinity Conference.

The announcement of the PWQA matching funds challenge to augment members’ donations to the WQRF via the Ray Cross challenge drew applause all around. The final brats devoured, the membership headed homeward – but not before they committed to attending the Northern California Barbecue Round Up this summer!