Monday afternoon, March 27, the tradeshow floor was a blur of forklifts, carpenters, electricians and sales reps. Dollies flew down the aisles laden with equipment, cases and display elements. High in the rafters, a man perched in a cherry picker attached lights and signs. It was a typical set-up day at America’s Water Opportunity Show, WQA Aquatech 2006.

That night, the members of the Board of Directors of U.S. AIDIS joined the preparations. President Phil Braswell noted that his organization was looking forward to making many new acquaintances by co-locating their conference at WQA Aquatech, giving attendees the advantages of the educational offerings of both groups.

Over breakfast the following morning, Peter Censky spoke with pride of the preparations and work performed by WQA staff for the largest event of the year while wondering if the gray, rainy weather would affect attendance. “I think we’ll break all kinds of records at this show—the elements are all in place and we’ve been joined by AIDIS members. Advance registrations have surpassed our expectations,” he stated. 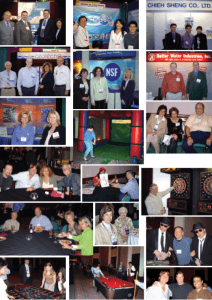 The show and most networking events were held at the Donald E. Stephens Convention Center, a large venue linked by skywalks to surrounding hotels. While vendors continued to set up on Tuesday, many WQA task forces convened, committees met and experts debated.

At the California Salinity Task Force, members of PWQA reported on progress made, fires quenched and new relationships strengthened throughout the bellweather state. WQA’s Carlynn Meyers and PQWA’s Tracy Strahl were notably proud of the Inland Empire Utility Authority project. Study results of that initiative will be forthcoming later this year.

Meanwhile, ozone and membership marketing task forces reported on their various activities, denoting positive progress on a multitude of issues. The Septic Tank Task Force led by TWQA’s Bob Boerner was perhaps the most heavily attended of the morning meetings, as many were interested to hear (and participate in) the continuing dialog between WQA and NOWRA members. The two groups had decided last fall in Cleveland that they would do more than talk: they have created a joint commitment to explore how wastewater systems and water softeners actually interface by clinical study. 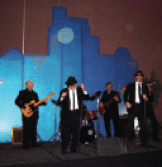 Matt Byers, (see WC&P Dec. 2005 NOWRA & WQA Septic Softener Symposium) spoke for many when he stated,”I am a scientist. I want to address this issue based on knowledge and in my opinion, there is a paucity of data on both sides. Let’s get past perceptions and discover the facts.”

NOWRA’s Executive Administrator, Linda Bonner, introduced Dr. Bruce J. Lesickar, Dr. Jim Converse, Ron Suchecki and Jerry Tyler. Lesickar has been working with the Consortium of Institutes for Decentralized Waste Institutes and will be sharing that data with WC&P readers in the coming months, with the goal of enabling water industry members to better understand the wastewater side of the issue. As this project goes forward, the researchers will need locations where they can test actual water softeners draining into septic systems for clinical study, if possible in controlled situations. If you believe you have an appropriate site to offer, write the editors here and we’ll forward your information to the team.

Sessions continued throughout Tuesday on both the WQA and AIDIS sides of the convention center. All who were at the morning’s NOWRA session—and many more besides!—returned at 2:30 in the afternoon for an open panel discussion of the softeners and on-site wastewater disposal systems issue. The morning’s speakers were joined by WQA’s Joe Harrison and D.J. Shanahan as well as Terry Bounds from Orenco systems, Inc., a brave manufacturer indeed as he was willing to lay out his position (and that of many in his industry) in regard to softeners. While he did not sway listeners, he earned the respect of all for his candor. In a session that went on for close to three hours, many different viewpoints were shared and while disagreements were the norm, all found they could agree on the need for science—not anecdotes— to determine the truth once and for all. 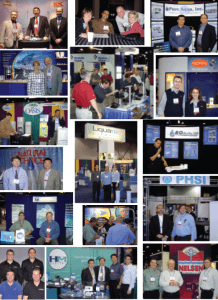 That evening, WQA invited exhibitors to enjoy, ‘A Taste of Rosemont’ in a reception room at the conference center. Local restaurants sent both their signature dishes and staff, in many cases the owners themselves. They formed a room-sized buffet so that by walking the perimeter, attendees sampled the best each had to offer. Menus and directions were distributed as many made reservations for later in the week—some won WQA raffles, garnering gift certificates to the participating establishments. Musicians enlivened the scene and a deliciously good time was had by all.

Wednesday morning there was standing room only at the Emerging Technical Issues session where Bill Lloyd of Dow Chemical, Francis Boodoo of The Purolite company and WC&P’s own Dr. Kelly Reynolds of the University of Arizona discussed chloramines and home RO systems, arsenic applications and the significance of emerging contaminants in drinking water (respectively). The standing-room-only crowd rated this one of the top sessions of the conference.

The traditional State of the Industry address featured Debra Coy from Schwab’s Washington Research Group discussing publicly traded companies and Steve Maxwell giving an overview of corporate strategy. Peter Censky led the event and took audience questions on a host of issues at its conclusion.

A large auditorium space was the site of the grand opening ceremonies. Reminiscent of the Academy Awards (minus the tuxedos and evening gowns), multimedia features included musical interludes, pre-recorded announcers and multiple video screens. Retiring members of the board were thanked by outgoing WQA president Gerry Dierolf (including WC&P’s own C.F. ‘Chubb’ Michaud who had served on both the Board and the Board of Governors this past year) and those nominated to the Board were introduced to the audience. Michael T. Baird, incoming President Neil J. Desmond, Richard Mest and Tracy Strahl (manufacturer/supplier nominees); M.Stanley Fauth, Richard J. Lorenzen and Bret Tangley (dealer nominees) and Denise Urbans (commercial/ industrial nominee) were unanimously approved and would serve at their first meeting on Friday.

GE’s Sam Karge gave a rousing opening message, after which Peter Censky and Ids Boersma welcomed all the partipants. Jack Lorenzen acted as master of ceremonies and was ably aided by Duane D. ‘Doc’ Nowlin, Director of the Water Quality Research Foundation (WQRF).

Lorenzen had the honor of presenting the Golden Circle Award to Michael J. Dunn; the Honorary Member Award to Debra Coy; the Award of Merit to Joseph J. Huenmann and Richard Mest; the Regents Award to Peter Waelti; the Lifetime Member Award to I. Donald Rosuck and the Hall of Fame Award to James W. Baker. The Key Award went to Rob Anderson and Mark Lambourne of Superior Water. Their remarkable work in West Valley City, Utah was covered in WC&P’s February 2005 issue. Their foundation continues to supply all public schools in their community with free lead filters for all drinking water fountains and faucets.

Doc Nowlin told the audience of a very exciting opportunity: Ray E. Cross has bequeathed up to $300,000 of his estate to the WQRF Endowment Fund in the form of a challenge grant. This means that for every new dollar contributed to WQRF until April 1, 2007, Cross will match it dollar for dollar up to $300,000.

Nowlin suggested several creative ways of making these donations, including that all WQA members give what they can. It is a chance to have contribution dollars doubled and that makes it a very valuable opportunity indeed.

After the departing message from Gerald Dierolf and the Treasurer’s report from Dennis Rupert, customer loyalty expert and business writer Tony Alessandra shared his insights on communication, the Golden Rule and much more. It was easy to see why this television host of Strictly Business is such a popular speaker!

The trade show’s opening at noon brought a roar from the crowd who had gathered at the doors, eager to be the first on the show floor—which remained packed with attendees right up until the closing announcement at 5 p.m. People were so loathe to leave, in fact, that security personnel took to flashing the lights while patrolling the aisles announcing ‘lights out’!

The WQA networking event that evening was a drink-and-dine industry celebration. It seemed all 4,000+ attendees were there and it was a chance to meet them all. Every language imagineable was being spoken as people met and mingled. Invitations to manufacturers’ hospitality suites kept many guests busy throughout the evening as they wandered from hotel to hotel to attend different parties. Others left to enjoy Rosemont and nearby Chicago proper for the evening.

Thursday morning the International, Manufacturer/Supplier and Dealer sections met in the early hours, concluding at the opening of the trade show at 10 a.m. Throughout the afternoon at different exhibitors’ booth, educational opportunities continued. These ‘spotlight’ sessions granted attendees 0.1 CPD each. That evening, WQA presented the ‘Sights, Sounds & Sports Challenge of Chicago’ in the Grand Ballroom of the Hyatt Regency O’Hare Hotel. This was an interactive evening in every sense of the word. Virtual golf gave hackers an opportunity to excel at either driving or putting or both; a tarot card reader divined the future; micro racing had would-be Grand Prix drivers competing by remote control; arcade games buzzed and rang and all the while, the Blues Brothers and their band kept the crowd on its feet. Seeking audience participants, Jake and Elwood selected three of WQA’s finest—Bob Boerner, TWQA, Culligan San Antonio; Bob Shelton, TWQA, Shelton’s Water Refining and Duke Shannahan, Sharp Water, Salis-bury, Maryland. Their rendition of Louie Louie remains a seminal moment in WQA history.

Friday morning after early education classes, the WQA Board of Directors met. All committees reported to the newly convened Board under the direction of 2006/2007 President Neil Desmond (see People section, this issue). All agreed that WQA Aquatech 2006 was a resounding success.

Saturday presented two opportunities: certification exams and business seminars. Meanwhile, on the trade show floor, the electricians and carpenters returned, this time disassembling all they had erected. As trucks were loaded and forklifts carried off crates, you could hear people saying their goodbyes and “see you in Orlando!”