Afriend once said to me, “Why do you go around everywhere looking for microbes in the environment when you know you’ll find them?” The point was well taken. We can look for targeted microbes and often find them, but what does that information mean in terms of public health? Before we can assess the public health risk of a particular contaminant, we must first identify it as a hazard. Sound simple? For some contaminants, it is. For others, the process is undeniably complicated.

What constitutes a hazard?
A hazard is something that has the potential to cause harm; the probability of that harm occurring is referred to as risk. Identification of a waterborne hazard is an important component of microbial risk assessment, but is often complicated by factors such as host susceptibility and response, pathogen virulence, route of exposure, etc.

Host Response/Susceptibility. While there is general agreement with the laundry list of harmful waterborne pathogens and their associated health effects (see Table 1), 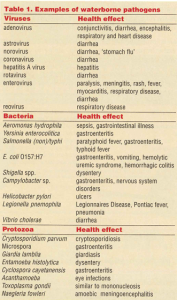 factors related to the host that influence the potential for these hazards to be a risk are important to consider. When a person is exposed to a pathogen in water, a variety of outcomes may occur. In general, the exposure may result in 1) no colonization (i.e., no infection) either due to host defenses (i.e., immune function) or to a deficiency in the pathogen machinery (i.e., loss of infectivity factors, such as specific cell binding proteins); 2) subclinical disease, meaning that the infection produced no overt clinical disease but rather an asymptomatic response; or 3) clinical disease, resulting in a symptomatic infection (Figure 1).

Clinical disease may manifest as mild, moderate or severe illness, further resulting in short-term, acute symptoms, long-term, chronic symptoms, or even death. The outcome of exposure to a pathogen is a complex interaction between host susceptibility and microbe virulence. We know that specific immune status has a significant impact on host susceptibility. In general, someone who is immunocompro-mised (the elderly, the very young, organ transplant patients, etc.) is 10 to 100 times more likely (than the general population) to become infected by a waterborne microbe and to exhibit symptomatic illness or die from that infection.

Pathogen Virulence/Transmission. Not all pathogens are created equal: some are much nastier than others in terms of the problems they cause for their host. In addition, within the same family of microbes, some genera are hazards to humans, while others are not. Differences are further divided by species, strain or serotype levels of the same genera. Consider, for example, the protozoa microsporidia. There are about 143 genera of microsporidia containing 1,200 species. Of these, only 14 have been identified as human pathogens and are primarily opportunistic, meaning that they are usually not harmful to healthy individuals but rather infect those with compromised immunity. There are many opportunistic pathogens that are waterborne. Classic examples include bacteria that are commonly isolated from, or are even ubiquitous in, the environment and often grow in the distribution system of water supplies (i.e., Pseudomonas aeruginosa, Aeromonas sp., Mycobacterium avium complex and Legionella).

Frank pathogens are those that cause disease in the general public as well as the immunocompromised, including Cryptosporidium, Salmonella or hepatitis A virus. Evaluating the potential risk associated with a frank pathogen sometimes involves consideration of these genetic differences within the same general organism type while considering their preferred route of transmission. For example, all identified species of the bacterium Shigella are known to be pathogenic but may be spread by different routes, including food, water or sexual contact. Surveys of household water supplies have found common evidence of Naegleria fowleri, a deadly waterborne amoeba (see WC&P, January 2006, On Tap) but symptomatic infections are rare, likely due to the primary exposure route being via the mucus membrane (i.e., requiring head submersion) rather than ingestion. In addition, survey data of Cryptosporidium in finished water supplies, with a surface water source, found that 27 percent were positive for the pathogen.1 Recently, however, scientists suggest that variation among genetic subtypes is related to virulence (i.e., the ability to produce disease) of the organism. Thus, to evaluate the particular risk related to Cryptosporidium detected in drinking water, we must identify the hazardous subtypes and related virulence factors.

Complications of hazard identification
Further complicating the identification of specific hazards and their source are long incubation periods, similar attack rates, overlapping symptomology and poor diagnostic techniques. The incubation period of the same microbe may be days to weeks. Thus, even if an infection results in overt disease and the patient seeks medical attention, determining the source of infection (i.e., food, water or something else) may be impossible, unless many people are identified as being exposed from the same hazard and exposure route. Evaluation of an outbreak based on the characteristics of symptomology may not help in identification of the hazard since many organisms have similar attack rates (i.e., the percentage of those exposed versus those that become infected) and associated symptoms of illness (i.e., diarrhea). Collection of stool samples is paramount for identification of causative agents in an outbreak; however, even when available, it may not provide definitive diagnosis due to lack of methods for detection of many pathogens. In addition, some microbes can be isolated from ill patients that appear not to play a role in active infection but rather co-exist (perhaps as an opportunistic microbe) with other pathogenic agents. Still other microbes are shed intermittently during the infection process and, although they are indeed the responsible agent, are not consistently present in the stool.

The impact of waterborne hazards
It is often quoted that documented waterborne outbreaks are the tip of the iceberg in relation to the true impact of waterborne disease in the U.S. Estimates from the Centers for Disease Control (CDC) and others state that between two and seven million illnesses per year are due to waterborne contaminants. This value is up to seven times higher than the illnesses associated with identified outbreaks occurring over the last 34 years collectively. We know that evaluation of waterborne hazards can be improved by better reporting and the development of rapid, if not real-time, methods of hazard identification. In addition, we must be conscious of our preconceived notions of waterborne hazards. Disease can manifest as more than diarrhea. We know that microbes found in water are associated with chronic illnesses such as arthritis, heart disease and diabetes. Thus, we keep looking for and finding examples of exposure to microbes, but identifying which specific hazards are associated with what proportion of outbreaks, endemic diseases or a more broad-spectrum health effect continues to be a challenge in hazard identification.