Arsenic has been consistently a hot topic in the water treatment industry for several years now, culminating with adoption of the new maximum contaminant level (MCL) of 0.010 mg/L earlier in 2006. With this new federal requirement in place, many small water systems and individual well owners are finding themselves out of compliance and looking for a solution in short order.

The NSF/ANSI Joint Committee on Drinking Water Treatment Units has been anticipating this need for several years. This volunteer group of manufacturers, regulators and users of water treatment equipment has been developing requirements for arsenic reduction claims for media filters through the consensus process mandated by the American National Standards Institute (ANSI).

The first of these, a claim for pentavalent arsenic (As V, As 5+ or arsenate) reduction under NSF/ANSI 53, was implemented in 2003. Early in 2006, the group’s current work for arsenic reduction claims on media filters was completed with the adoption of a test protocol for reduction of trivalent arsenic (As III, As 3+ or arsenite). Adoption of this protocol has meant that everything is in place for manufacturers to be able to substantiate a general arsenic reduction claim on their media filters—if the filters can pass the four required tests.

Four tests required for a general arsenic reduction claim
Adsorption of arsenic via media filtration is a tricky business. Many factors can affect the efficiency of the arsenic adsorption, especially those associated with water chemistry. Iron concentration, pH and the redox potential of the water play key roles. Arsenic can exist in the two forms or oxidation states as indicated above (pentavalent and trivalent). The affinity of various media for arsenic is strongly influenced by the oxidation state of the arsenic. In general, media are more effective in treating water contaminated with pentavalent arsenic than in treating water containing trivalent arsenic. Because of this complexity, there are actually four tests required for a media filter to substantiate a claim of arsenic reduction (see Figure 1).

These four tests must be conducted under highly controlled conditions, with very specific water chemistry. The test water is prepared by initially removing essentially all of the soluble and insoluble substances from the water by treating it with reverse osmosis (RO) and deionization (DI). This process allows the testing laboratory to begin building up the test water with a clean slate.

Then, various ions are added using specified reagents in the proper amounts and sequence. The ultimate water chemistry achieved for testing of pentavalent arsenic reduction is described in Figure 2. 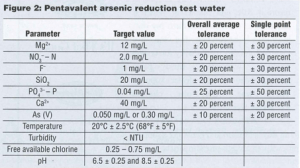 Note that the pentavalent arsenic concentration may be either 50 µg/L or 300 µg/L. Manufacturers may select either concentration as the basis for their claim. The 50 µg/L claim is for those consumers who previously did not require arsenic reduction (because under the old guidelines their water had acceptable concentrations of arsenic), but are now in need of treatment to bring the concentration below the new MCL of 10 µg/L. The 300 µg/L challenge is based on the 95th percentile of occurrence. This means that 95 percent of consumers who have detected arsenic in their water have 300 µg/L or less that they need to treat.

In practice, it takes several hours of lab time to add the necessary reagents to the tank of water, purge the oxygen by bubbling nitrogen through it and then confirm the tank chemistry through laboratory analysis. All of this must be completed prior to using the water for testing purposes. This must be done each day of testing, because the Standard requires that a new tank of water be developed each day. These requirements make trivalent arsenic reduction one of the most labor-intensive tests in any of the NSF/ANSI Drinking Water Treatment Units Standards, especially for test units that have high rated capacities.

Specifics of the challenge procedure
Similar to many of the tests under NSF/ANSI 53, two units are plumbed to the test stand and conditioned in accordance with manufacturer’s instructions. For reference, a photo of NSF’s test stand for arsenic reduction testing is included as Figure 3. 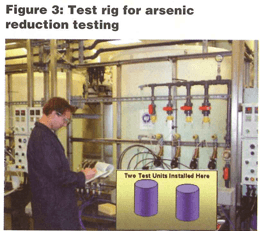 Non-plumbed batch systems may also be tested and are also initially conditioned per the manufacturer’s instructions. They are then manually operated as a consumer would use them, at the daily usage rate recommended by the manufacturer.

The test is concluded when the required percentage of the manufacturer’s rated capacity has been achieved. This is 120 percent for units that have a performance indication device (PID), which is a volume-triggered filter change indicator. Products that do not have a PID must perform adequately through 200 percent of the manufacturer’s rated capacity.

Samples of the influent and effluent from each test unit are collected six times throughout the test, at intervals specified in the standard. The test units must reduce the influent challenge to 10 µg/L or less arsenic in each test unit’s effluent at each sample point.

Arsenic reduction claims—another example of standards evolving to meet needs
With the broad-based claims for pentavalent arsenic reduction and arsenic reduction now included in NSF/ANSI 53, the various technical committees involved have continued the evolution of the standards to meet the needs of consumers, regulators and manufacturers of water treatment equipment. Other working groups continue development of protocols and requirements for additional claims to meet a variety of emerging needs in water treatment both domestically and abroad.

As knowledge of toxicology, drinking water analytical capabilities, treatment technologies and consumer sophistication continue to advance, this evolution of the standards will most assuredly continue. For additional information on these trends and current efforts, please visit www.nsf.org/business/standards_and_publications/.

About the author
Rick Andrew has been with NSF International for seven years, working with certification of residential drinking water products. He recently assumed the role of Operations Manager of the Drinking Water Treatment Units Program, after having served as the Program’s Technical Manager for four years. His previous experience was in the area of analytical and environmental chemistry consulting. Andrew has a bachelor’s degree in chemistry and an MBA from the University of Michigan. He can be reached at 1-800-NSF-MARK or email: [email protected].