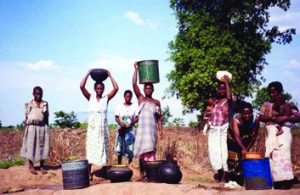 Currently, 1.1 billion people—primarily in the developing world—lack access to an improved water supply. Point of use (POU) disinfection and basic education on hygiene and sanitation appear to be the most affordable and effective control measures in developing nations. Often the cost to treat water at the POU correlates with an actual economic gain, as the savings—the reduction of medical expenses and other adverse effects and their costs—exceed the initial investment of the water treatment application. Evidence is mounting that simple and inexpensive POU water treatment has a major impact on the risk of death and disease in these areas.

Global waterborne disease
In 2000, an estimated 2,213,000 people died from exposures to poor sanitation and contaminated water. The majority of those sickened and killed by water-related diseases were children less than five years of age. Half of these deaths are among infants younger than one year. Most disconcerting is the fact that these afflictions are preventable, given the availability of appropriate resources.

In a 2002 report, World Health Organization (WHO) recognized the need for simple POU water treatment technologies to significantly reduce global deaths among children. Chlorine is widely used for POU water treatment in many regions but has limited effectiveness against resistant microbes like Cryptosporidium, a pathogenic protozoa. In addition, the efficacy of chlorine is reduced in turbid waters and it cannot treat heavy metal (i.e., arsenic) contamination by itself. Thus, for highly contaminated waters, chlorine disinfection alone may not be adequate. In Bangladesh, for example, waterborne exposure to arsenic is a serious concern with up to 77 million people at risk of arsenic-related toxicity.1 Similarly, boiling and solar disinfection techniques do not address all treatment needs.

POU treatment saves lives
Recently, a study reported that the use of a commercially developed flocculant-disinfectant sachet had a significant impact on the prevalence of diarrhea in children in Guatemala.2 In the study community, drinking water was heavily contaminated: 98 percent of the drinking water sources tested positive for E. coli, a water quality indicator of fecal contamination. At the beginning of the study, more than 3,400 people from 514 households in rural Guatemala were divided into two groups: those provided with POU treatment sachets and those not.

In households with POU water treatment, the prevalence of diarrhea was 40 percent lower than those without. A 39-percent lower incidence rate was noted in children less than one year of age. This age group is most vulnerable to death due to diarrhea (about a million diarrheal deaths a year) and a particular target age for interventions that can prevent the disease. The risk of death is up to three times greater if the infant is not exclusively breastfed. In this Guatemalan community, nearly all (>93 percent) received supplemental liquids prepared with household water.

Previously, a similar study conducted by the Centers for Disease Control and Prevention (CDC), with over 6,500 residents of rural western Kenya, compared the health benefit of using flocculant-disinfectant sachets versus chlorine-based water treatment versus the standard practice of cloth filtration. During the 20-week study period, 28 deaths occurred in the group using traditional cloth filtration water treatment, compared to 17 deaths in the group using dilute chlorine bleach and 14 deaths in the group given flocculant-disinfectant sachets. This study, published in 2005, documented a significant decrease in diarrhea in children and was also the first to show that POU water treatment could significantly reduce overall risk of mortality.

Simple technology, significant results
The flocculant-disinfectant sachets purify water using a process similar to that used in municipal water treatment facilities. Disinfection of microbes is achieved via calcium hypochlorite; other contaminants (protozoa, arsenic, organic matter) are removed via the flocculation with iron sulfate. Laboratory studies showed that the treatment system effectively reduced 14 types of waterborne bacterial pathogens, including Salmonella typhi and Vibrio cholerae. E. coli was also undetectable. More than 99.99 percent of human viruses were eliminated and 99.9 percent of Cryptosporidium and Giardia protozoa. Arsenic was also removed during treatment by 99.8 percent. Similar results were found in highly turbid test waters and naturally contaminated waters. Costing only pennies to treat 10 liters of water, this treatment technology was quickly utilized in real-time clinical studies to determine their applicability for use in the developing world.

A promising future
Overall, CDC studies in several countries of the flocculant-disinfectant POU water treatment have shown up to an 85 percent reduction in diarrheal illness when used correctly. Such interventions are already being applied in Uganda, Haiti, Pakistan and the Dominican Republic and there are plans to expand the program to Botswana, Democratic Republic of Congo, Kenya, Malawi and Ethiopia this year. To date, more than nine million water treatment sachets have been sold, treating over 90 million liters of water. Experts estimate that in 2005 alone, these products prevented approximately 12 million episodes of diarrhea and 36,000 deaths in children.3 It is local village women in these areas who sell the sachets, which are donated by the manufacturer as a nonprofit venture.

According to the United Nations World Water Development Report (March 2003), disinfection of water at the POU is the most cost effective intervention, only pennies a day, where infrastructure needs in developing countries are estimated at $80 billion a year. The use of a flocculant-disinfectant for drinking water treatment in the developing world, as described here, is clearly needed for global disease reduction.

About the technology
The flocculant-disinfectant sachets, developed by Procter and Gamble, Cincinnati, Ohio.