WQA Statement on Calcium and Magnesium (Water Hardness) Considerations for the WHO Guidelines for Drinking-Water Quality March, 2006

WQA Statement:
There should not be health guidance proposed for water hardness or recommended minimum compositions of calcium and magnesium in drinking water at this time. We believe the data remains inconclusive regarding the magnitude of risk of cardiovascular disease in populations consuming hard water. Health-based guidelines for levels of calcium and/or magnesium in drinking water would undermine consumer confidence in otherwise safe and healthy drinking water sources and methods of water supply treatment. These and other concerns were highlighted in a letter from the Water Quality Association to the World Health Organization dated January 27, 2005.
Rationale:

1. The magnitude of the “ischemic heart disease mortality” and other health risks postulated from calcium and/or magnesium deficiencies in drinking water is uncertain and remains unquantified. Plausibly, any potential risks may in fact be so relatively minor that they don’t warrant consumer alarm or governmental directives—actions that will certainly negatively influence consumer attitudes and safety perceptions toward many current and historically safe drinking water supplies. An exact mechanism of protection provided by small amounts of calcium and/or magnesium in drinking water has yet to even be established. Given the inherent inadequacies in current observations, it is more appropriate to define research needs in this area rather than reach any final conclusions at this time. Intentionally or not, premature recommendations likely will be construed as advice and lead to the unnecessary addition of specific constituents to drinking water for supposed preventive health care purposes, or to issuance of advisories not to take out certain elements from waters.

There cannot be any distinction or differentiation between the consequences of mineral deficiency in naturally soft water and that in demineralized, softened, and bottled water. It is inherent that any conclusions or guidance regarding health-based calcium and magnesium compositions in treated drinking water must be likewise applied uniformly across the water supply market. If users of point-of-use reverse osmosis water or desalinated water, for example, are advised that they are at significant risk due to calcium or magnesium deficiencies, the press and free market entrepreneurs cannot be prevented from informing residents in naturally soft municipal water systems of the same deficiency and significant risk. The same advisories and resulting regulations regarding calcium and magnesium concentrations in demineralized drinking water would also have to be applied to the major central supplies that have naturally low water hardness.

The calcium and magnesium levels in some US drinking waters, for example, are as follows: 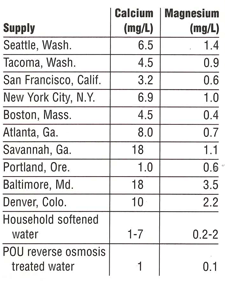 A counter-argument often stated is that a separate hard water supply or re-hardening filters can be provided for drinking purposes. This is not always practical and, even where it is practical, the end-user many times would be deterred from using established, safe, and reliable water treatments that would make the water undrinkable according to their newly influenced perception. The added expense of calcium and magnesium supplementation devices will likewise discourage consumers from realizing the significant beneficial enhancements of treating or purifying their household and drinking water qualities. Challenging the acceptability of water for drinking purposes—whether naturally soft, softened, demineralized, or bottled—must be balanced against the danger of driving people away from otherwise purified, protected, and safe drinking water supplies.

There are numerous existing domestic and commercial installations (demineralizers, softeners, reverse osmosis, and distillation systems) that would be impacted by any change in guidance and the ensuing regulations related to drinking water with low mineral content. Adverse publicity about treated and naturally soft water supplies will affect consumer confidence. The relevant agencies and organizations will have significant adverse impacts as they try to accommodate the careful nutrient management required as well as limit liability and other damages.

3. Water treated to remove hardness is inherently and substantially different from naturally soft waters. While water softeners take out all the hardness from the water, they also take out almost all traces of iron, manganese, lead, cadmium, barium, radium, strontium, beryllium, aluminum, and other metallic cations. Reverse osmosis systems take out these minerals even more completely. Distillers are perhaps the most efficient in this demineralization. Treatment devices may also remove such harmful compounds as nitrate, arsenic, endocrine disruptors, and many other synthetic and volatile organic chemicals. The removal of trace metals and compounds with proven human toxicity outweighs any conceivable negative effects from removing the magnesium and/or calcium from drinking waters.

All the epidemiology studies appear to have been done comparing naturally hard and naturally soft waters (as opposed to lime-soda or ion exchange softened waters). The differences between naturally soft and softened waters are significant. Naturally soft water, because of its paucity of total dissolved solids, is aggressive and corrosive. Naturally soft water actually leaches more contaminants from water distribution lines and plumbing systems into the drinking water supply, softened water does not. This major difference between these two types of waters must be taken into account but the data for such comparison is grossly lacking. The WQA recommends comprehensive comparative studies be conducted to clearly determine the effect of the softening of waters and potential health outcomes.

Very few studies have ever attempted to compare a central treatment plant using lime-soda or sodium based ion exchange softening in one community while another community nearby uses unsoftened water. We found one such study (“Possible Toxic Water Factor In Coronary Heart-Disease,” published in THE LANCET, No. 7914, Vol. I for 1975). A copy of this study was enclosed with the January 27, 2005 letter from WQA to WHO. As stated earlier the fundamental differences in the nature of softened and naturally soft waters lead to an entirely different set of conclusions for health related implications.

Similarly, no research has been carried out to date that compares the health of those who use home water softeners or under the sink reverse osmosis (RO) systems in hard water areas to the health of those who do not use such devices. Given the positives of what these water treatment systems do accomplish, it is absolutely essential that such studies be conducted prior to reaching any conclusions that could adversely affect their use.

4. The strength of the hypothesis from the Rome Nutrient Minerals in Drinking Water WHO Workshop (November 11-13, 2003) of lower risk of cardiovascular disease in populations consuming hard water has been challenged by more recent and comprehensive literature reviews. In a review (requested by Aqua Europa) of the documents cited by the 2003 Rome Nutrient Minerals in Drinking Water Workshop, Dr. Richard Morris of the University College London, concluded that the recommendations exceeded the strength of the data, and, furthermore, limitations applied to the data search criteria could have introduced bias. He recommended, “More comprehensive and systematic review of all relevant evidence should be carried out. The scope of the question to be tackled would have to be explicit and specific”. This widely recognized expert quotes evidence demonstrating water hardness does not appear to be a significant contributor to coronary heart disease. Dr. Morris concludes that the quality of evidence is poor for surmising there is “…an inverse relationship between calcium and magnesium concentrations in drinking water and ischemic heart disease mortality…” Significantly, Dr. Morris documented the investigators failure to use available data that showed a lack of relationship between water hardness and coronary heart disease because they did not “systematically” assemble and review all the relevant studies.

5. A “systematic review” has since been conducted by Professor Paul Hunter of the University of East Anglia on behalf of the DWI (Drinking Water Inspectorate, United Kingdom) and published on the DWI website in January 2006. Professor Hunter identified some 2096 papers, narrowing them down to 115 for full article appraisal and those were then categorized according to the study design and rated according to the study quality. This review “exceeds that undertaken by the WHO with regard to both the consideration of a wider range of primary data papers, but also a greater focus upon a systematic assessment of the quality of each study.” Significant findings reported in the University of East Anglia and Drinking Water Inspectorate October 21, 2005 “Review of Evidence for Relationship Between Incidence of Cardiovascular Disease and Water Hardness” include:
a. “At present there is not enough evidence of a sufficient quality to identify any factor responsible for the apparent cardioprotective effect of hard water.”
b. “All the primary data studies examining drinking water components contained in this review were observational studies.”
c. “The evidence to date is therefore too weak and inconsistent to allow any firm conclusions to be drawn regarding the possible biological mechanism linking drinking water quality and cardiovascular disease.”
d. “At present, it is not possible to identify a single nutrient that may be regarded as explaining the water story.” (The “water story” is the examination of water hardness and human health.)
e. “Whilst strong evidence from alternative sources has been presented in the literature for a role of both calcium and magnesium with disease, the actual contribution and relevance of the drinking water supply as a route of intake in comparison with other sources (e.g., dietary) remains to be more adequately defined.”
f. “To date, there is still insufficient evidence to assess the relative importance of calcium and magnesium with regard to the water story and cardiovascular disease.”
g. “More focused research at the individual level is required to address the deficiencies of the studies to date, and to facilitate a more appropriate assessment of a causal association between drinking water quality and cardiovascular disease.”

Dr. Hunter “found evidence to support a protective effect of drinking water hardness against cardiovascular disease” but concluded, “at present there is insufficient evidence to elucidate the nature of the apparent effect”. He adds that, even for the methodologically superior cohort and case control studies reviewed, “a common criticism of study quality was poor characterization of the actual exposure of interest”. He concludes, “Epidemiological studies to date are therefore deficient in their ability to contribute to an assessment of causality. A major challenge for future studies attempting to establish causal association between drinking water parameters and cardiovascular health is the accurate and qualitative characterization of individual exposure and biologically relevant dose”.

6. The key point is that any recommended guidance for drinking water hardness will be a public health policy. It will affect consumer attitudes toward the safety of their drinking water supplies and it will significantly direct expenditures of resources toward public health protection. We must insist that the highest levels of evidence be used to guide and set these policies. All of the evidence so far to suggest any association between drinking water calcium and/or magnesium levels and human health are only observational population studies. No matter how competently performed, an observational or even a preponderance of many observational studies can only suggest hypotheses, which then must be tested and proven, as with an intervention trial! Included is an essay on “Consider the Quality of the Science” to explain evidence-based health care. It is essential this be followed and causality be proven in the considerations of calcium and magnesium (water hardness) for the WHO “Guidelines for Drinking-Water Quality.”