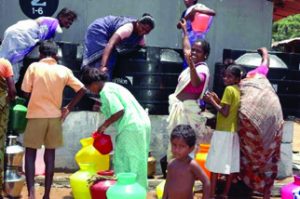 Introduction
Viewing efforts with hindsight isn’t a case of ‘would have, should have’ when it comes to disaster relief. Analyzing the results, how many did we help? How could we have done 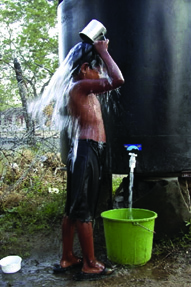 World Vision’s efforts
The earthquake and tsunami that struck Asia on December 26, 2004 mobilized many organizations to aid survivors. World Vision, an experienced provider of help in disaster situations, created their World Vision India Tsunami Relift Program (ITRP) to specifically help the affected region. Their goal was to provide safe drinking water in relocation camps and institutions such as 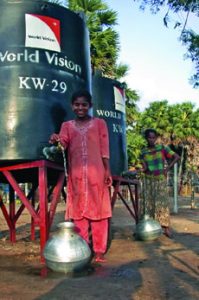 schools and medical centers. The ITRP has 10 site offices in five Indian states that provide aid to approximately 242,085 persons who were affected by the tsunami.

Manufacturers and suppliers of water purification systems responded from around the world, sending state-of-the-art equipment to the heart of the stricken region. What happens when first world technology—and leading edge at that—is deposited into the third world during a major crisis?
Lessons learned

Donors cannot have a ‘give and forget’ attitude—there will be no one in the disaster area who is skilled in the set up, operation or maintenance of water purification systems. World Vision received many offers to supply water treatment equipment, but opted for those that offered technical expertise on the ground.

Donors can be excused for believing that in a disaster everything is needed, but what really counts is what is actually needed and what can be used realistically and in a sustained manner. Local technical support, training and maintenance are key.

Even though the technology World Vision opted to accept from donors was excellent in terms of providing quality water, the awareness of how to use filtered water and how to maintain the systems was low at the community level. Such technology had never been seen before at any of the installation sites. Managing the equipment at the community level was possible only with specific training and follow-up. Where follow-up, ownership and training are lacking, the longterm result is likely to be failure.

Appropriateness of location is critical. Installations that were made in areas close to users (near camp sites, temporary shelters and schools) were consistently relied upon and continue to be used. Installations that were a long distance away from the people being served and those not installed on appropriate sources (i.e., non-brackish supplies) were not effectively used.

Communities in which local ownership of the systems was established, where continuity of the water source was pre-negotiated, where a local water committee was formed and responsibilities for water supplies were delegated to certain individuals had the highest rates of success. It was also determined that projects are unlikely to be successful without the involvement and consent of the local government or Panchayat (a lower level elected official).

In five of the seven districts where ultrafiltration systems were installed, the project was considered a long-term success. World Vision has compiled a list of contributing factors in order to benefit future efforts:

Judging what we’ve accomplished
World Vision believes that success in this type of project is measured in terms of how many people who were without access to safe drinking water ultimately gained access. To measure this requires significant efforts, including testing the water supply both before and after system installation.

Using the success factors developed above, it seems clear that donations of water treatment technology after a disaster are neither complete nor successful if they are not followed by a comprehensive on-site program to train and involve the local population.

World Vision is currently in the process of transferring water treatment systems from under-utilized sites and from closed relocation camps to schools and hospitals where they will continue to be used.

Guidelines for the industry 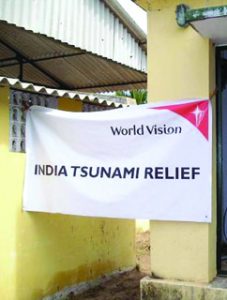 Several very valuable and significant lessons were learned by those who participated in tsunami relief efforts which should be considered when developing any disaster relief strategy to provide safe drinking water.
First and foremost is the fact that such efforts should be the result of calm and thorough planning and preparation long before a disaster ever occurs. When a catastrophe does occur, most manufacturers of water treatment technology would otherwise quickly find they do not have the knowledge, infrastructure or staff required to set up a long-term project that incorporates all of the success factors mentioned. To accomplish these requires a well thought out and comprehensive public/private partnership between manufacturers and government organizations or NGOs (nongovernment organizations) like World Vision. By combining the technology and know-how of manufacturers with the capacity building and training efforts of an established NGO well before disaster strikes, projects conceived out of compassion can lead to saved lives on the ground.

Andrew Warnes is Director of International Sales and Marketing for the Zenon Consumer Products Division. Formerly, he was the International Director of the Water Quality Association (WQA) Warnes can be reached at (847) 274-0595 or via email at awarnes@zenon.com. Zenon donated 45 Homespring® Ultrafiltration systems in India for tsunami relief as part of a coordinated effort with their local partner, Eureka Forbes Ltd., India. 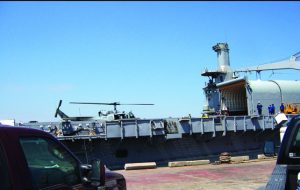 Like the Asian tsunami, hurricanes Katrina and Rita exposed America to the devastating
and immediate impact of a natural disaster firsthand and to the ensuing lack of clean drinking water. These storms also exposed the commitment and dedication of those in the water treatment industry who responded to the crisis with bottled water and emergency treatment technologies and to the long-term needs for water treatment infrastructure redevelopment and groundwater remediation.

More than six months later, many water treatment companies are still providing assistance in the stricken regions and exploring new and unique ways for their expertise and equipment to be best utilized in future times of tragedy.

Kinetico Incorporated’s response to Hurricane Katrina was immediate. Like many companies that provided 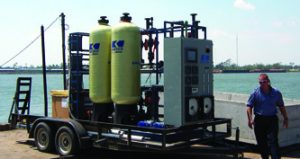 emergency assistance, Kinetico’s relief efforts were a combination of their expertise in the field and just a little bit of luck.

The company was contacted by a representative in the St. Bernard Parish area of Louisiana, who had spoken with municipal workers about the need for water treatment on the local docks.

“As luck would have it, we had a complete custom system that was basically sitting on the production floor,” said Dave Chew, Kinetico’s Director of Marketing and Technical Service. “Our people sprang into action and we had it delivered to St. Bernard Parish along with the technical support needed to utilize it.”

Once the system was installed, the operators attempted to get a temporary permit from local officials. Unfortunately, none were being issued for emergency systems. Luck struck again as a happy coincidence had a U.S. Naval vessel at the dock where the equipment was set up. “The Navy ship’s Captain stated that they were prepared to commandeer the system if necessary to keep it running,” Chew said.

As a result, the Kinetico system was able to provide clean water when and where needed. The experience has prompted the company to review the need for emergency response protocols in the future, to ensure that it can do more than just ship bottled water in the event of a disaster.

“Like most companies, the day after the storm hit, we were talking about what we could do, how to do it and where,” Chew said. “It’s a great thing that so many people wanted to help, but a more focused approach would be better for the future. We need to make sure if we drop a highly sophisticated water treatment system into a place that needs it, even if we are also sending along personnel or coordinating with local technical support, that the people suffering can make the most of that system.”

In the future, greater benefits would be gained if state and local municipalities would guarantee access to systems in emergency situations via the implementation of temporary permitting rules, Chew said, adding that water treatment manufacturers should be developing their own individual plans for providing emergency treatment equipment so that they are not scrambling in the event of an immediate need.

“Our industry is in a unique position to provide help in these situations, we should take the initiative and make sure that we are doing all that we can.”