PWQA President Mike Mecca and past President Mark Howlett sat with California State Senator George Runner and explained the benefits of water softening while downstairs, Assemblymember Rick Keane’s Legislative Director Brent Ten Pas joined PWQA members for lunch and an update on the improvements being made at DHS (Department of Health Services) in terms of new product certifications. In short, it was a very special week in early February in Sacramento for members of the water treatment and purification industry – it was PWQA’s Legislative Days. 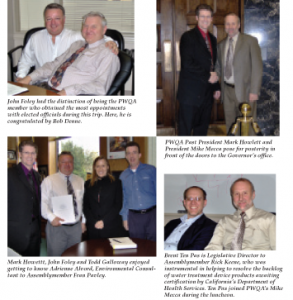 With no pressing issues on the event horizon, the group had the luxury of reaching out to every elected official and their staff in a friendly open exchange of ideas and information. Those who participated in the event began at home the preceding week, writing and calling assembly persons and senators to secure appointments. Between homes and offices, store fronts and factories, there were many districts represented.

The group based itself out of the Hyatt Regency Sacramento Hotel and in good company there, as Governor Arnold Schwarzeneger calls it home during the work week. He was not available during PWQA’s visit, unfortunately. Both the Executive Board and Board of Directors took the opportunity to meet while gathered at the capital.

The first evening in town concluded with a delightful dinner at the Hyatt, which culminated in a trivia quiz hosted by Alec Trebek’s erstwhile rival, Chris Layton. 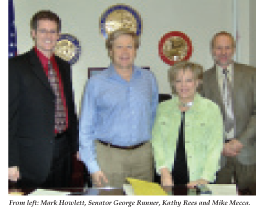 After breakfasting together in the next morning, members dispersed to meet with different elected officials throughout the day. We hosted a buffet luncheon at the Senator Hotel’s conference room and enjoyed getting to know many staff members who attended.

In each instance, members were able to either meet with a Senator or Assembly person or an informed member of their staff, ranging from Environmental Consultants to Legislative Aide to Chief of Staff. As a result, each meeting provided an opportunity to give an overview of PWQA and to offer the organization’s expertise and insights as water and salinity issues come to the fore legislatively across the state. Many we met with were pleasantly surprised to learn that PWQA represents over 100 companies who serve several hundred thousand households and tens of thousands of California businesses! 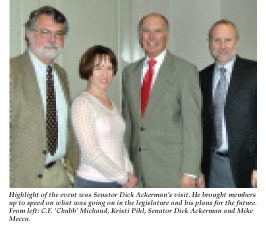 “This was the first major group event of 2006,” President Mecca noted, “and the success of these meetings is a tremendous indicator of good things to come.”