Medical needs
Ordinarily, when investment specialists speak of the water industry, we are referring to high-purity water for the generation of power, manufacturing semiconductors and so forth.

The investment community tends to focus on water utilities, as providers of water, and companies that provide purification systems and desalination. Often overlooked are the applications and market niches that are even more critical and, in fact, offer some of the greatest growth prospects. RO’s role as the technology of choice in certain medical areas is such a niche.

Diabetes
One of those critical areas is the medical arena—specifically, the diabetes epidemic. Experts now predict that more than one-third of American children born in 2000 will develop diabetes in their lifetime.

People with kidney failure undergo either hemodialysis, which substitutes for some of the filtering functions of the kidneys or transplantation to receive a healthy donor kidney. End-stage renal disease (ESRD) occurs when the kidneys are no longer able to function at a level that is necessary for day-to-day life. It usually occurs as chronic renal failure worsens to the point where kidney function is less than 10 percent of normal. At this point, the kidney function is so low that without dialysis or kidney transplantation, complications are multiple and severe and death will occur from accumulation of fluids and waste products in the body.

Dialysis and the role of water
In the U.S., more than 400,000 people are on long-term kidney dialysis (hemodialysis) and more than 20,000 have a functioning transplanted kidney. ESRD almost always follows chronic kidney failure, which may exist for 10-20 years or more before progressing into ESRD.

Each day, thousands of people need to have hemodialysis performed in order to live. The equipment that makes the dialysis possible is complex, but no part of it is more important than the equipment that purifies the water. In the dialyzer, an exchange process occurs, whereby blood surrenders impurities while also absorbing needed nutrients and medications. Pure water removes the impurities from the blood of the patient and is then disposed of. If there are impurities in the water, there is a chance that those impurities could upset the dialysis patients’ systems.

Water plays an important, life-sustaining role for these patients. When hemodialysis started to blossom over 40 years ago, many hemodialysis centers used water right from the tap. Practitioners now know that certain contaminants in water supplies can cause severe complications in dialysis patients.

More than 95 percent of all dialysis centers use water purification equipment to purify water for dialysis. The keystone of these water purification systems has become reverse osmosis (RO). RO has proven to be the safest, most reliable and most economical method for this application. 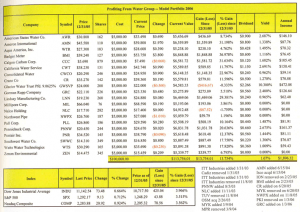 After the softener, activated carbon is used to remove chloramine, chlorine and trace organics. Following those steps, the water goes through the RO machine, which typically removes 90 to 95+ percent of the dissolved salts. RO will also remove bacteria and pyrogens (substances, often of unknown origin, that produce fever when introduced into the human body, which may not have been destroyed while killing bacteria) as well as other organic molecules. In some cases where the raw water has a very high level of dissolved solids, a second RO machine in series may be used to lower the dissolved solids level to an acceptable number.

There are, of course, many companies in the water industry that participate in the rapidly growing dialysis market. Among them are: General Electric, Calgon Carbon (for the activated carbon component), Siemens/USFilter and many others. Sadly, the growing epidemic of diabetes and ESRD is creating a rapidly expanding market for water treatment equipment.

About the author
Neil Berlant is First Vice President and Managing Director of the Water Group at The Seidler Companies Inc. of Los Angeles. Prior to that, he was with Wells Fargo Investments, First Security Van Kasper and UBS PaineWebber. Since 1986, Berlant has concentrated exclusively on business and investment opportunities in the water industry. A regular contributor to WC&P, he has been interviewed by The Wall Street Transcript. He can be reached by phone (800) 840-1090 x 625; fax (213) 955-4990; email: neilwater@seidlercos.com