The End of an Era / Culligan Closes Northbrook 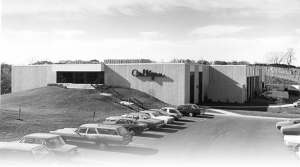 There are few names in the industry (if any) which have more resonance and history than Culligan. For 70 years, that name and its legacy have been tied to Northbrook, Ill., the home of Culligan International Co.’s corporate headquarters and the site where Emmett Culligan first began selling water treatment equipment in the 1930s.

Before the end of this year, that home will be gone, as Culligan has announced plans to close the 40-acre property and move its headquarters to a new location in the Chicago area.

“We all hate to see things that we’ve grown up with, icons in our business, disappear, but things change,” said Elmer Parks, owner of Culligan of Boone and Putnam Counties in Central Indiana and a 32-year veteran of the company. “I think it will have more of an impact on us dealers (many of us have been with the company for decades) than on the individual customers. It kind of feels like a part of the family is gone.”

Parks, who operates as an independent Culligan dealership, said dealers were notified of the change in an email early this year. Culligan has a network of more than 1,000 dealers. Owned since 2004 by the investment firm Clayton Dubillier & Rice, Culligan International has annual sales in excess of $700 million.

It’s that dealer network that is the driving force behind the closure of the 450,000-square-foot manufacturing facility and corporate office, said Culligan President Mark Seals. Rather than focusing on manufacturing their own equipment, Culligan will work with a select group of specialty manufacturers who can continually invest in new technologies.

“There’s always concern when changes are made,” said Donald Karger, President of the Culligan Dealers Association of North America, Inc., an association of about 400 independent Culligan dealers. “But the potential for the impact this change will have on improving the Culligan brand and bringing new products to market will alleviate any concerns that dealers or even consumers may have had.”

The shift will allow the company to refocus its efforts on promoting its dealer network and capitalize on the strengths of individual dealers, Karger said. It will also help bring new products into the water treatment industry, Seals predicted.

But that transition will have a price. While the company’s 300 headquarters employees will remain on staff in the Chicago area, 200 Northbrook factory workers will lose their jobs in the shake-up.

According to the Northbrook Star newspaper, Emmett Culligan’s job creation in the mid-1930s is credited with helping the Village of Northbrook, then a town of barely a thousand people, survive the Great Depression. Culligan has continued to be a key economic driver for the city, which is now home to about 33,000.

“Internally, we never talked about the company as Culligan, we talked about Northbrook,” Parks said. “How are things at Northbrook? What’s the latest out of Northbrook? We’ve all been to the headquarters and like me, I bet many dealers out there consider it an extension of our own dealerships.”

While sad to see it go, Parks says he is eager to see how the changes will benefit the company and strengthen individual dealers like himself.

“Times change and you’ve got to be able to change right along with them,” he said.