In the Fight against Cryptosporidium Can Old Technology Be the Best Solution?

Introduction
Judging by the amount of trade press on the subject, Cryptosporidium is public enemy number one when it comes to water health. A Google search on this parasitic single-celled organism yields 1.42 million listings. Further illustrating its potential threat to human health, the top two sponsored links on the search page were from attorneys looking to represent victims of alleged infection involving Cryptosporidium (cryptosporidiosis).

Waterborne menace
Crypto is a waterborne protozoan that lives in the feces of infected humans and other mammals. The infectious form of the parasite, known as an oocyst, has a thick outer shell that allows it to survive outside the body for long periods of time and makes it very resistant to chlorine-based disinfectants.

Crypto can cause painful abdominal cramping and profuse, watery diarrhea that is often accompanied by fatigue, fever, nausea, vomiting, headaches and loss of appetite. Symptoms normally last from one to two weeks in healthy adults, but may be more severe in the elderly, pregnant women, children and people with suppressed or compromised immune systems such as those with diabetes, patients undergoing cancer treatment or organ transplants and especially those infected with HIV/AIDS.

Since being recognized as a waterborne pathogen in the mid-1980s, it is estimated that over 500,000 people in the U.S. have been infected, but since it is difficult to detect, the Centers for Disease Control & Prevention (CDC) feels many cases of cryptosporidiosis go unreported. In an outbreak in Milwaukee in 1993, over 100 people died after being infected from contaminated drinking water. There is currently no drug that can cure cryptosporidiosis.

Crypto has been identified as the cause of recreational water illness (RWI) in swimming pools and water parks with over 10,000 people being infected in New York, Georgia, Kansas and Florida over the last several years. While the parasite is usually ingested by swallowing contaminated water, there is speculation that Crypto can be inhaled in the aerosolized water droplets from a spray park. 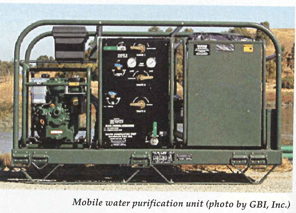 Monitoring and removal
Monitoring levels of Crypto in swimming pools and water parks is expensive, time consuming and often unreliable. Because it is highly resistant to chlorine, the oocysts must be physically removed from the water, making filtration an essential step in water treatment. However, because the Crypto oocysts are in the two- to five-micron range, they will usually pass through most pool sand and cartridge filters.

Standard diatomaceous earth (DE) filters offer better removal rates, but since the number of oocysts needed to cause human infection is relatively low (ingestion of as few as two oocysts can cause illness), the swimming pool DE grades currently being used offer only partial protection.

Diatomaceous earth, also known as diatomite, is the sedimentary accumulation of the microscopic, silica skeletons of single-celled algae known as diatoms. As one of the first forms of life on Earth, diatoms today still exist as they did when they inhabited the waters millions and millions of years ago. These aquatic plants are at the bottom of the food chain for all forms of life on this planet. They have the unique ability to take silica out of the water and create intricate mineral housings for themselves. There are over 10,000 varieties of diatoms and each one builds a structure different in shape from other varieties.

It is diatomite’s unique physical and chemical properties that allow it to be such a highly effective filtering media in many applications. Its inertness in almost all liquids, its internal pore structure that provides high permeability and its low bulk density all contribute to its value as a filter aid in the clarification step of most industrial, commercial and environmental processes. Because the DE structure is comprised almost entirely of silica (an inorganic mineral) there is a reduced risk of creating DBPs like trihalomethanes when using it in conjunction with chlorine for water purification.

During World War II, the U.S. Army developed a mobile water purification unit using DE and chlorine for the removal of Entamoeba histolytica, a protozoan parasite similar to Cryptosporidium that was prevalent in the Pacific war zone. Goodman Ball Inc., a military contractor, improved upon this technology through its pioneering work in the early 1990s to identify the most effective DE grades for removal of Cryptosporidium.

At Goodman Ball’s direction, research was conducted by the University of Arizona with oversight by the U.S. Navy and Marines which showed over four-log removal (99.99 percent) using medium flow rate grades with permeabilities in the 1.20 D’Arcy range rather than the fast flow rate grades (2.0-3.0 D’Arcy range) typically used in swimming pool applications.

Prior to this pioneering research, even the U.S. Environmental Protection Agency (U.S. EPA) did not differentiate among various grades of DE according to their removal efficiencies. Further lab and pilot testing of these medium flow rate grades was conducted in the late 1990s by Professor Jerry Ongerth from the University of New South Wales, proving over six-log removal (99.9999 percent) even at filtration rates double the standard of one gpm/sq.ft. of filter area.

Specially designed precoat filters are now under development that can utilize this optimal grade of DE to capture the greatest number of oocysts within the filter cake and inactivate them with a steady dose of chlorine. With the popularity of swimming as a recreational activity, it is imperative that the best available technology be used to keep Cryptosporidium from infecting the general public.

About the author
Jim Lauria is President of Team Chemistry LLC, a consultancy that helps companies leverage their technical capabilities to solve practical problems profitably. Before founding Team Chemistry he was President of an $80M filtration media company. Lauria recently provided peer review for the World Health Organization’s latest publication on pathogen control in water treatment. He holds a bachelor’s degree in chemical engineering from Manhattan College. You may contact him at jimlauria@teamchem.com.