Water utilities around the country are upgrading filter systems to meet new federal radium level standards set by a 2000 amendment to the Federal Safe Drinking Water Act. The City of Wenona, Ill. initially addressed this problem more than a decade ago by installing a reverse osmosis system (RO). Recently it improved its water filtration system by replacing five sand filters with a single self-cleaning, stainless steel filter. As a result, radium levels have been further reduced, dissolved solids removed, water taste has been improved and water consumption during backwashing has been cut dramatically.

“We were using around 20,000 gallons of water to backwash the sand filters, but only around 45 gallons to backwash the new filters,” says Waste and Wastewater Superintendent Mitch McCaw. “That gives us a substantial savings in both water use and pumping costs.”

Wenona began the process of upgrading its filtering system in the late 1980s. In November 1987, the Illinois Environmental Protection Agency (Ill. EPA) sent the city an enforcement notice that ordered it to bring radium levels down to compliance with the 5 pCi/L (picoCuries per liter) requirements of the Federal Safe Drinking Water Act Amendments. Although the only mandated change was to reduce the radium content by 78 percent, the city undertook an evaluation of what other steps it could take to improve overall water quality at the same time. The city has two wells drawing from a sandstone aquifer and the water was very high in total dissolved solids, primarily sodium and chlorides. It also had an iron content high enough to stain clothes and fixtures and an unpleasant odor from hydrogen sulfide gas.

Three technologies were evaluated for remediating the high radium levels: sodium zeolite ion exchange softening, lime softening and RO. While the first two would have addressed the immediate problem of attaining regulatory compliance and the zeolite ion exchange would have had the lowest initial construction costs, neither would have removed the dissolved solids or improved the taste. In fact, the zeolite method would have increased the already high sodium levels. So instead, the city opted to install a $600,000 RO facility, with half the money coming from the state. The plant can treat 194,400 gallons per day, which gives it an excess capacity of 54,400 gallons over the peak daily demand. 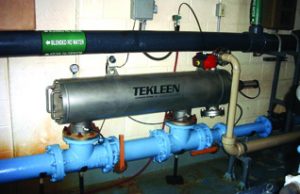 Triple treatment
Wenona’s plant had three levels of filters. To begin with, there was a series of five sand filters to remove most of the entrained particulates. These fed into a one-micron cartridge filter and finally into the RO system. The sand filters, however, required a lot of maintenance—about three to four hours per week of manual backwashing. But they did do the job, so they stayed in service for a while. However, they had been plumbed with ABC piping which eventually began to fail. 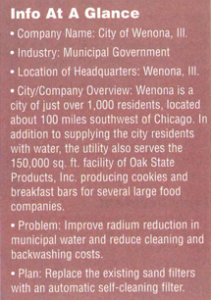 “We were looking at having to pay substantial costs to replace the valves and piping with ductile iron,” says McCaw. “Then I ran into someone who told me about stainless steel, self-cleaning filters. I got with our engineers and they agreed that it was a good solution.”

The new filters incorporate a self-cleaning mechanism which allows an uninterrupted flow of filtered water even while the cleaning takes place. The procedure uses a fraction of the water that normal back-flushing requires. Stainless steel is standard (rather than a special order option) providing a longer lasting filter.

In Wenona, the dirty water flows in around the outside of a coarse filter which removes the larger particles. This prefiltered water then flows to the other end of the filter housing where it passes from the inside to the outside of the final filter and then through the outlet. Over time, as the filter removes particles from the water, those particles clog the filter, reducing water flow and water pressure. At the outlet is an adjustable pressure differential switch, typically set at five to seven pounds. When that threshold is crossed, it opens the small flush valve, which initiates the cleaning procedure.

Rather than taking the full water flow to initiate a complete backwash, the filters have a number of small cleaning nozzles arrayed around a central shaft. Opening the flush valve lowers the water pressure within the cleaning unit and the nozzles vacuum the dirt from the inside surface of the filter screen. A hydraulic motor and piston cause the nozzles to rotate and move axially in order to cover the entire screen surface in under 10 seconds. At that point the flush valve closes and the cleaning mechanism returns to its starting position. Other than a small control voltage for the differential pressure sensor and to actuate the flush valve, all motions involved in cleaning the filter are performed using the water pressure.

Water and labor savings
Wenona replaced the five sand filters with a single new stainless steel, self-cleaning filter on a six-inch, 150-gpm line, freeing up a lot of floor space in the process and eliminating the need for much of the piping and valves that would have been required if the city had continued using the sand filters.

Initially, the plan was to have the RO process continue during the backwash. However, the Ill. EPA had required that the city remove some of the pump stages to reduce the pressure on the ROs. Consequently, there wasn’t enough flow to feed the ROs during the filter backwash cycle. Instead, the city reprogrammed its Programmable Logic Controllers (PLCs) to shut down the ROs while the new filter cleaned itself, a process that takes about 15 seconds every three days. Not only does it save time, but it also saves money. As a result, combined Radium 226/228 levels are running from 1.1 to 3.5 pCi/L, well below the 5 pCi/L standard.

“The filter manufacturer’s service has been excellent,” says McCaw. “Their representative was very helpful during the initial installation and he stopped by to take a look at the installation and gave me some additional tips.”

About the author
Drew Robb is a Los Angeles-based writer specializing in engineering and technology. He received a degree in geology from the University of Strathclyde in Scotland before moving with his wife and two children to America. He can be reached at robbeditorial@sbcglobal.net

About Tekleen filters
The stainless steel, self-cleaning filters discussed herein are Tekleen Filters manufactured by Automatic Filters, Inc. of Los Angeles, Calif. and are available in a wide variety of sizes and configurations. For more information, contact the manufacturer at (310) 839-2828 or visit the website, www.tekleen.com. Be sure to request a copy of the CD-ROM showing how Tekleen filters work, containing installation diagrams and technical information.