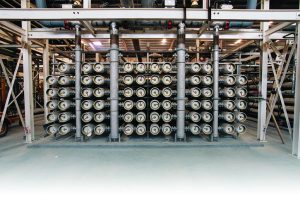 Kuwait is an example of one Middle Eastern country that has leveraged cutting edge membrane technology to meet its ever-growing demand to supply fresh water. Made up almost entirely of flat Saharan desert, with an average yearly rainfall from three to eight inches, the country of Kuwait has long struggled to provide its people and industries with clean water.

Solution: treat and reuse domestic wastewater
As part of a $390 million infrastructure project initiated nearly five years ago, the Kuwaiti government commissioned local engineering firm Mohammed Abdulmohsin Al-Kharafi & Sons to design, build, own, operate and maintain a new water reclamation facility in Sulaibiya, a suburb located 13 miles northwest of Kuwait City. The local firm, led by the Al Kharfi Group, selected an international manufacturer and supplier to operate the new water reclamation facility, which is part of a 30-year concession.

Since its groundbreaking ceremony last March, the plant has been treating up to 100 million gallons per day (MGD) of municipal wastewater from Kuwait City. Although the reclaimed water produced by the plant meets many current standards for potable water, its usage is limited to the agricultural and industrial fields. The water is also expected to be used in residential and commercial areas for gardening, and car and building washing among others.

The Process: Combining conventional treatment with membrane filtration
In order to obtain the highest-quality reclaimed water, Kuwait’s wastewater reuse process involves two plants in separate locations. The wastewater is treated in several stages starting from screening and degritting at Ardiya and ending with reverse osmosis at Sulaibiya.

Conventional biological wastewater treatment
The Ardiya plant, where the wastewater is first received from several sewerage collection systems, is a conventional screening and degritting facility followed by a pumping station transferring water to the biological wastewater treatment plant (WWTP) at Sulaibiya, all operated and maintained by the Kharafi Group. This plant treats the municipal effluent to a high standard . The Ardiya plant removes particulate and grit, as well as oil and grease, and utilizes anaerobic, anoxic and aerobic systems for enhanced biological removal of nitrogen and phosphorus, as well as a system of secondary clarifiers. Additionally, sludge from the wastewater treatment plant is treated for use as a soil conditioner or organic fertilizer.

Membrane filtration: UF and RO
The secondary effluent from the Ardiya plant is then piped 25 km to the Sulaibiya water reclamation plant, a state-of-the-art ultrafiltration (UF) and reverse osmosis (RO) facility, designed, commissioned and operated by a single company. The combination of UF and RO removes bacteria, virus and total dissolved solids (TDS). 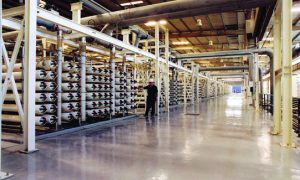 The influent at the Sulaibiya facility is prefiltered with disk filters and then filtered with UF membranes as a pretreatment for the RO process. Membrane filtration was selected over conventional tertiary clarification and filtration because it consumes fewer chemicals and guarantees that low turbidity water is fed to the RO. The UF pretreatment prolongs the life of the RO membranes, lowers RO operating pressure and energy consumption, and reduces cleaning frequency of the RO system.

Conclusion
Since its completion, the project has provided several benefits to Kuwait, including financial and environmental. From a financial perspective, water reclamation costs significantly less than seawater desalination. Additionally, the burden of waste has greatly reduced through volume reduction and quality improvements, nearly eliminating the risk of marine pollution. Crops also benefit from nutrients garnished when the reclamation facility transforms sludge into natural fertilizer for various agricultural purposes.

The Kuwaiti government has been very pleased with the continuous operation of the new facility. In January of last year, the government requested to expand the plant to 600,000 m3/day (159 MGD), and there are additional discussions underway to further increase capacity in the future.

About the technology
The Kuwaiti facilities discussed herein were designed, built and operated by GE Water and Process Technologies. In order to further address the growing demand for its water and energy technologies, GE has been investing in the region with major offices now located throughout the Middle East, with water technology representing one of the company’s fastest growing segments in the region.

“Water is the lifeblood of industries and communities around the world, and scarcity, increasing demand and rising costs are driving the need to conserve, reuse and identify new supplies of this essential resource,” said George Oliver, president and CEO of GE’s Water & Process Technologies business. “We are proud to work with the Kuwaiti government and the Kharafi Group to address the water needs for the people of Kuwait.”