J. Michael Read, a water quality professional from Oregon City, Oregon, has been elected President of the Water Environment Federation. A wastewater professional with more than 30 years of experience, Read is a Vice President with HDR Engineering, Inc. A member of WEF since 1980, he served on the federation’s Executive Committee from 2000 to 2002, as well as numerous other committees, including the Long Range Planning Committee, which he chairs.

ZENON Environmental Inc. announces the retirement of Samir Zalzal from its board of directors and the appointment of Robert G. Cassels to the vacant seat. He is a co-founder of Cassels Investment Management and an investment counselor to high-net-worth individuals and institutions. He has served 12 years with a Canadian chartered bank as Head of Equity Investments and as Managing Director of the Mergers and Acquisitions Group. Cassels is also a member of the board of trustees for Trinity College and is Chairman of the college’s Investment Committee.

Watts Water Technologies, Inc. announces that Doug Deviney has joined the company as Vice President of Wholesale Marketing. Deviney, who joins Watts from Conbraco Industries, will oversee all of Watts’ wholesale marketing activities and programs. He is also the former Vice President of Sales and Marketing for Watts Industries, Canada. He will be based out of the company’s corporate headquarters located in North Andover, Mass.

Aquest names new President, Sales Manager
John Stipanuk has been named President of Aquest Inc., manufacturer of faucets, monitors and filters for the water treatment industry. Stipanuk is the former Vice President of Marketing for Molex Inc. and has more than 20 years experience in product design, developing new markets and management of key operational functions. He will focus on developing new business, improving operational processes and preparing the organization to meet high-growth objectives.

The company also added Kelly O’Connell as new National Sales and Marketing Manager. O’Connell has held various national sales and marketing roles in the telecommunications industry over the past 20 years, including Teltrend, Inc. and HyperEdge. She will be responsible for launching the new Aquacore Ultrafiltration product line and developing markets for new faucets and performance indicator devices in the U.S. and Canada.

Lindsay Benaszeski has been named Clean Water Testing’s newest Field Service Technician. Working previously at the University of Wisconsin and in the environmental departments of Stora Enso North America and Weyehauser paper mills, Benaszeski will be responsible for performing well water and septic inspections and managing the certified operator program for public facilities.

Underwriters Laboratories announced the death of former UL President Jack Bono in November. He was 80. Bono served in the post for more than two decades beginning in 1978, culminating a 44-year career with the company. He is survived by his wife, Marian, four children, three stepchildren, six grandchildren and eight step-grandchildren.

B&H Labeling Systems, an international supplier of high-speed roll-fed labeling systems for bottled water, has appointed Joe Kennedy as Director of Market Development. Kennedy is responsible for identifying and assessing new applications for B&H technology that are outside their traditional markets and for executing strategies that will support the development of new applications. He brings more than 20 years of packaging industry experience in sales, marketing and business development to his position. Kenndey holds a degree in marketing from Ball State University. 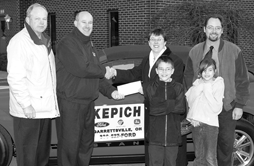 Gloria and Tom Litwinowicz of Ohio won a new Ford Mustang convertible through EcoWater Systems’ annual Soft Life™ Sweepstakes drawing. The Litwinowiczs’ received their prize in November at EcoWater/Servisoft of Middlefield, the EcoWater Systems dealership in Burton, Ohio. Each year, the company gives away a car through the sweepstakes, a program to support EcoWater dealers.

Schwing America, Inc. has appointed Chuck Wanstrom to the position of National Sales Manager with the company’s Material Handling Division. Wanstrom joined the Schwing team in 1995 as Project Engineer for the Concrete Pump Division and as the company’s product line expanded, he was promoted as the division’s West Coast Sales Manager. As National Sales Manager, Wanstrom will oversee 20 representatives serving customers with municipal and industrial applications nationwide.

Severn Trent adds Regional Sales Manager
Severn Trent Service has appointed Mitch Matthews as Southeastern Regional Sales Manager for its Water Purification group. Matthews, a 10-year veteran of municipal and industrial sales, will be responsible for the sales of all disinfection, instrumentation, engineered products and packaged membrane systems. He will operate out of Athens, Ga.

Calgon adds two to board
Calgon Carbon Corporation announces the election of William R. Newlin and Timothy G. Rupert to its board of directors. Newlin, who serves on the board of directors for ArvinMeri-tor, Inc. and Kennametal Inc., is the Executive Vice President and Chief Administrative Officer of Dick’s Sporting Goods, Inc., a retail sporting goods chain with 239 stores in 34 states. Rupert is the President and Chief Executive Officer of RTI International Metals, Inc. and also serves on its board of directors. He is a member of the Financial Executives Institute and of the American Institute of Management Accountants. The additions bring to 10 the number of Calgon board members.

Chemilizer hires Sales Manager
Chemilizer Products, Inc. has appointed Lawrence (Lou) Polur to the position of Sales Manager. A former sales manager for IC Intracom, he will be responsible for quantifiable improvements of the company’s sales force, including developing new account strategies and strengthening the effectiveness of trade show appearances. Until his appointment, Polur served as General Manager of PCMC of Pinellas Park, a cable, cell phone and Internet products supplier.