By Peter Moss and Guido Maragliano 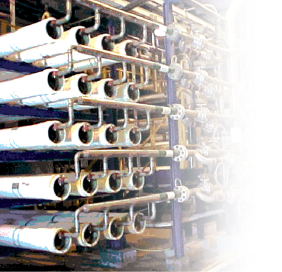 Introduction
Reverse osmosis (RO) technology has been used for desalination since the late 1960s. RO membrane elements are available for a variety of desalination applications, treating water from sources ranging from seawater and brackish water to wastewater, for use in applications from industrial and process water to drinking water.

In recent years, major advancements have been made in the flux and salt rejection capabilities of the membranes. It has become apparent to some that a high flow seawater membrane element would have advantages in terms of capital and operating costs. During the mid-1990s, a spiral wound element was developed.

In 1999, high flow seawater elements were installed in a power plant in Italy to produce 5,230 m3/day of process water and boiler makeup. This article is a case history describing the plant and looking at the performance of the system over five years.

Background
In Italy a number of the power stations in the 1990s were modified from coal fired to oil fired. For environmental reasons, there was also a requirement for a deSOx plant for flue gas scrubbing. One of those plants originally used a demineralizer treating well water to provide boiler makeup. However, the deSOx plant required additional process water beyond the capacity of the existing demineralizer. The plant decided to use desalinated seawater to provide water for both the deSOx plant and for boiler feed.

The process water quality required for the deSOx plant and the boiler makeup was different. The deSOx plant required less than 1,000 mS/cm. The boiler makeup requirement was less than 20 mS/cm, which would then be polished by mixed bed ion exchange. Both thermal and membrane processes were considered for seawater desalination. A seawater RO system with a partial second pass was chosen over evaporators because of need for two different water qualities. Commissioning began in late 1999 and the system went into service the following year.

Development of high flow seawater membrane
The use of RO for desalination has grown rapidly over the past 40 years. The first thin film composite membranes1 were introduced in the mid 1970s; the first seawater systems were built in the late 70s.2 The early plants consisted of two passes or a partial second pass3 as the seawater membrane had less than 99 percent rejection and could not achieve drinking water standards in one pass.

Over the years, improvements were made to increase both flux and rejection of the membranes4 to allow production of low salinity water from one pass and in construction of the element to operate up to higher pressures5 of 83 bar to allow higher recoveries and operation on high salinity water. However, by the late 1990s a need was seen for a high flux seawater membrane for use on lower salinity seawater and/or at lower temperatures. This membrane fit the requirements at San Filippo del Mela, where the high flow seawater membrane could produce the process water for the deSOx plant and a partial second pass could produce the low salinity water required for the mixed beds of the boiler feed water.

In 1995, a new high flow seawater membrane was first marketed for small elements used in yachts.  The membrane worked very well for this application. An eight-inch diameter element was then developed. The element construction was designed to provide high membrane area and had the capability to operate up to 70 bar. This is achieved by using a 28 mil brine spacer rather than 31 mil used in a standard area element. Also, rather than the simplex permeate spacer used for the high pressure 82 bar elements, a thinner, modified tricot is used, giving a membrane area of 370 square feet. The first commercial production of this new element was in late 1999 for the San Filippo del Mela project and was one of the first eight-inch high flow seawater elements to be commercialized.

The pretreatment process and instrumentation diagram (P&ID) is shown in Figure 1. The seawater is dosed with sodium hypochlorite for disinfection. Polyelectrolyte can be dosed for coagulation at this point. There are two stages of filtration. The first stage filtration is through continuous backwashing, up-flow gravity sand filters and the filtered water is collected in the filtered water storage tank. The filtered water is pumped through second stage multimedia pressure sand filters, with facility to dose additional coagulant if required. The filtered water is passed through UV sterilizers for further disinfection. Hydrochloric acid and anti-scalant are dosed for scale control and sodium bisulphite is dosed for dechlorination. The final step is five-micron cartridge filtration. 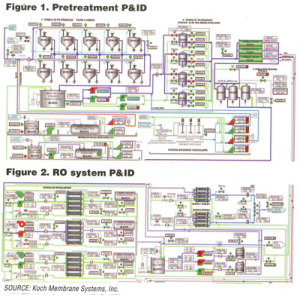 RO trains
The RO system is divided into three first pass trains of high flow seawater membrane elements and two second pass trains of high rejection, low pressure brackish water membrane elements. The RO system P&ID is shown in Figure 2. A photograph of the three first-pass trains is shown in Figure 3. Each first pass has a capacity of 72 m3/h and operates at 42 percent recovery. Each second pass has a capacity of 32.5 m3/h. The first pass consists of a single array of twenty pressure vessels with seven high flow seawater elements in each tube.

Part of the first pass permeate is used for process water, with sodium hydroxide addition for pH correction. The rest of the permeate goes to a storage tank and is pumped through cartridge filters into the second pass, which consists of a 3:1 array of four pressure vessels with seven high rejection, low pressure brackish water elements in each vessel. A photograph of the two second-pass RO trains is shown in Figure 4.

Performance of plant
The plant was commissioned in 1999. This article focuses on the performance of the high flow seawater elements in the first pass. Water samples taken during commissioning showed the first pass permeate total hardness was 16 mg/L as CaCO3 and chloride was 170 mg/L. These values were in line with anticipated values. The feed pressure settled to less than 60 bar, which was better than anticipated. Once stabilized after commissioning, the flux remained relatively stable for about two years.  After about two years of operation, the normalized flux declined. Additionally, the differential pressure rose slowly during the first two years, from about 0.8 bar to 1.9 bar. However, in the last year the normalized differential pressure rose more rapidly to 3.3 bar.

The flux decline, together with the differential pressure increase shows that eventually significant fouling occurred. Records from 2002 show feed water SDI15 (15-minute Silt Density Index) of 1-2. By 2004, the feed water SDI15 had deteriorated to 4-5. The deterioration in feed water quality explains the increase in fouling and element blockage. Despite regular cleaning, the blinding of the membrane and the blockage of the element feed channel could not be fully reversed. Cleaning was initially every two to three months and was later increased to every month. It was thought that a significant part of the fouling was attributable to biogrowth and this has been addressed by starting to sanitize the elements.

The normalized salt passage has remained stable throughout the plant’s operating period. However, in the summer of 2004, the temperatures exceeded 30°C (much higher than design values) and since permeate conductivity rises with temperature, the product conductivity became too high to meet the plant’s requirements. A row of pressure vessels was taken offline to improve the quality by increasing the flux.

Conclusion
These first commercial elements performed very well on startup in 1999 and have continued to perform well over the four years to date. The customer has been very satisfied with the performance. The elements operated at lower than anticipated pressure and were able to produce the design quality and quantity of permeate from both passes. Despite the feed water eventually causing significant fouling, performance has been maintained with regular cleaning and little deterioration in quality has occurred. Higher seawater temperatures meant some changes in operation and for that reason there are plans to change one train of elements this year.

About the author
Corresponding author Peter Moss is responsible for European applications support for Koch Membrane Systems Fluid Systems® RO products used in potable water, industrial water and wastewater. An active participatent in the desalination industry, Moss is a member of the International Desalination Society (IDA); a board member of the European Desalination Society (EDS) and is involved with numerous other related water and filtration societies. Moss has worked in the water treatment industry for more than 25 years, specializing in membrane processes. He has a Bsc degree in chemistry from Sheffield University, is a Chartered Chemist in the UK and a Registered European Chemist.

About the company
Koch Membrane Systems, Inc. has been a global leader in separation and filtration products for more than 30 years. A designer and manufacturer of state-of-the-art membrane cartridges and elements, as well as complete membrane systems, KMS products are specified for the most demanding applications. To enhance membrane performance, KMS offers a line of antiscalants and cleaning chemicals and provides a wide range of maintenance and technical service programs. The company has supplied membranes for more than 15,000 systems installed around the world, serving the food processing, life sciences and general manufacturing industries, as well as providing potable water and wastewater treatment technologies for communities of all sizes.Headquartered in Wilmington, Massachusetts, Koch Membrane Systems is a Koch Chemical Technology Group, LLC company.