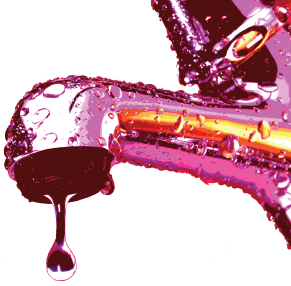 For decades, the free-living amoeba, known as Naegleria fowleri, has been a concern in recreational waters exposures but recent outbreaks and scientific surveys suggest tap water is also a route of transmission. Although infections are rare, the organism is commonly present in the environment and has a fatality rate of nearly 100 percent.

A deadly pathogen
Naegleria fowleri was first recognized as a human pathogen in 1965 and since then, more than 189 cases have been recorded, with 91 occurring in the U.S. alone. Infections with N. fowleri usually result in a deadly disease of the brain known as Primary Amoebic Meningitis (PAM).

Symptoms of infection usually occur between three to seven days and include:

Many of the symptoms listed are due to damage having already occurred in the brain; thus, only six persons have survived infection, making it one of the most deadly infectious diseases to humans. Because the disease is so rare, it is usually not rapidly diagnosed and thus not treated promptly or properly. Most of those who survived responded to treatment with the antibiotic Amphotericin B.

Since 1971, the U.S. Centers for Disease Control and Prevention (CDC) and the U.S. Environmental Protection Agency (U.S. EPA) have maintained a collaborative surveillance system for collecting and periodically reporting data relating to occurrences and causes of waterborne disease outbreaks. According to the CDC, averages of one to three infections occur in the U.S. each year. During the most recent survey period from 2001-2002, 65 outbreaks from 23 states were attributed to recreational water exposure, affecting approximately 2,536 persons. Eight of these outbreaks were due to PAM caused by N. fowleri, all of which were fatal. During that same survey period, 31 outbreaks were reported from drinking water in 19 states, affecting 1,020 persons. One of these outbreaks, resulting in two deaths, was from N. fowleri.

Infections usually occur in healthy, young people who have a history of exposure to swimming or diving in warm fresh water within the last one to two weeks. Most often, the first symptoms develop two to five days after the last exposure to contaminated water. The illness begins suddenly with the abrupt onset of fever, headache, nausea and vomiting. Occasionally, a prodromal stage of altered taste (i.e., ageusia) and smell (i.e., parosmia) occurs. Because progression to coma and death is so rapid and almost certain, confirmation of the disease is usually accomplished post-mortem upon examination of brain tissue or cerebrospinal fluid. Human infections have primarily been linked to recreational waters presumably because the amoeba must enter the body via the nasal passage. Thus, underwater swimmers and divers are most susceptible. Once in the nasal passage, the amoeba travels up the cells of the nervous system to the brain, where it effectively destroys brain tissue.

Environmental sources of contamination
Naegleria fowleri is commonly present in soils, sewage and surface waters worldwide (cases have been reported in diverse locations such as Europe, Australia, New Zealand, Thailand, Africa, India, Korea, Japan, Peru, Venezuela, Panama and the United States). Although capable of long-term survival in cooler waters, outbreaks generally occur in warmer waters (usually above 80oF), where the pathogen can feed off of growing bacteria and readily multiply. Typically, Naegleria infections are associated with surface water sources (lakes, rivers, ponds) or mud, but the organism has also been detected in thermal discharges of power plants, heated swimming pools, hydrotherapy and medicinal pools and even aquariums. The highest incidence is in summer months and warm climates, including Texas, California and Florida.

Although the U.S. ranks high on the list of frequent outbreaks compared to developing nations, this is most likely due to increased identification and reporting. Also, many countries have low autopsy rates and thus the incidence of N. fowleri and other pathogenic amoeba is probably under-diagnosed worldwide. In one instance in the U.S., an 11-year-old boy died of what was diagnosed as bacterial meningitis. Following the donation of several of his organs to recipient patients, it was later discovered that the actual cause of death was due to PAM, caused by N. fowleri. Other cases have been diagnosed decades post-mortem from preserved clinical samples.

Evidence of the environmental presence of Naegleria has mounted over recent years. The organism has been isolated from hospital and domestic water supplies, recreational waters and thermally polluted water from industrial sources. Hot water systems of six different hospitals were positive at a rate of 22 percent. A year-round survey of aquatic environments in Tulsa, Okla. showed that N. fowleri could be isolated from 18 percent of the 2,016 processed water and swab samples collected. During periods of thermal wastewater discharge, the concentrations of N. fowleri can increase by as much as two orders of magnitude, returning to previous levels only after 30 to 60 days following cessation of warm water discharges.

A tap water link?
In 2002, two five-year-old children, both living in Maricopa County, Ariz. died of meningitis caused by Naegleria fowleri. The children did not know each other and did not attend the same school but became sick on the same day and died within 72 hours following hospital admission. Both families reported that the victims routinely played in the bathtub. Public health officials were surprised to find that tap water was the only common exposure route of the two children. The water supply was an untreated groundwater source from a private water company serving 6,000 residents at the time of the outbreak. This was the first evidence linking Naegleria to a groundwater source. The groundwater supply from one boy’s home and the refrigerator filter from the nearby home of the second boy’s grandparents, where he reportedly spent a lot of time, were both positive for N. fowleri. A follow-up survey of bathroom and kitchen pipes and sink traps found that 17 of 19 samples were positive for N. fowleri. Filtered bathwater from both of the homes also tested positive. Similarly, two other deaths have occurred in infants, following bath water exposure to an untreated groundwater source.

Stagnant water in the domestic setting is also a concern. Outbreak conditions suggest that regrowth of the amoeba in stagnant sections of the domestic water supply may account for higher levels and increased incidence of disease. Given the large percentage of untreated groundwater supplies (about half of the U.S. supply) and subsequently no chlorine residual during distribution to the home, populations are still at risk of N. fowleri despite avoidance of recreational water exposures. Domestic water supply contamination was reported in South Australia and traced to growth in overland pipes during a period of hot weather. The exposure sources included a backyard wading pool and bathtub.
Avoiding exposure

N. fowleri is ubiquitous worldwide and free living amoebae are the main predators of bacterial populations in the environment, playing a major role in the ecological balance of many environmental systems. Humans are frequently exposed to the amoebic organism but few infections occur. In most cases it seems that a specific set of criteria must be present before infections ensue. Primarily, the organism must not only be present but must grow to high numbers (as evidenced by outbreaks in warm, polluted or stagnant water). In addition, the organism must be introduced to the nasal passages.

Luckily, conventional water treatment and pollution monitoring are effective at killing the infectious Naegleria amoeba. Coliform bacteria, a common means for monitoring microbial water quality, are reported to be a good indicator of N. fowleri which are susceptible to standard chlorination practiced by many municipalities. But what about untreated or unmonitored water supplies, both from recreational or tap water sources?

Recreational swimmers should be aware of disease symptoms following swimming in warm waters and especially stagnant water. Recommendations have been issued from tourism agencies, instructing swimmers to avoid submerging themselves completely underwater at hot spring recreational sites, as N. fowleri should be assumed present.

The use of nose-plugs or holding one’s nose when jumping into potentially contaminated water sources is also advised. Warnings from areas where infections have been documented in the past should be considered. Swimming pools should have a chlorine residual of at least one to two ppm. After swimming, remove water from nose by blowing. In the rare instance of characteristic neurological symptomology, physicians should be made aware of recent recreational water exposures.

Regarding tap water exposures, consumer education of domestic exposure routes and the point of entry precautionary measures is the primary contribution the water treatment industry can make to the public regarding this highly fatal pathogen. Using only treated bath waters is a valid consideration and water from wade pools should never be reused.

Following domestic water outbreaks of Naegleria fowleri in Australia, recommendations from the Environmental Health Directorate of Australia includes letting bath and shower taps run for a few minutes before use and to test pool and spa disinfectant levels every day. In general, they recommend that water you bathe, wade or swim in should be “clean, cool and chlorinated.”