New Mexico, ‘The Land of Enchantment,’ is home to spectacular desert scenery, brilliant sunsets and abundant wildlife. Unfortunately, there is not an abundance of the most valuable resource for the Southwest: water. Although new conservation technologies regularly arise, there are limited water savings. Low flow toilets, water-efficient appliances and lifestyle changes are helpful conservation tools, but these methods do not affect the primary source of excess water use in New Mexico: Irrigation.

Irrigation consumes a considerable amount of water in New Mexico. Inappropriate use and excessive run-off from irrigation only exacerbates the problem. Xeriscaping and irrigation conservation campaigns have had some impact, but it’s only the tip of the iceberg when addressing the severity of New Mexico’s water crisis.

“It’s frustrating to see neighbors watering during a rainstorm, gutters filled with runoff water and broken sprinkler heads unnecessarily flooding public parks,” said Contact Wireless owner Jon Word. “The solution is really quite simple: turn off irrigation systems when a watering cycle is unnecessary.” Traditional sprinkler systems, however, are set to operate on timers and are often difficult to control. If a rainstorm materializes while a homeowner is at work, it is impractical or impossible to make the trip home to interrupt a watering cycle on one’s sprinkler timer system.

The water industry needs new technology and effective products to ameliorate water waste problems. Cutting edge project testing and development is funded through New Mexico Governor Bill Richardson’s Water Innovation Fund. In November of 2004, Governor Richardson announced 25 projects that would be funded with a $10 million drought initiative; the Hydro Pro 1000 was one of those projects. Through innovation and state-of-the-art technology, it will play a major part in New Mexico’s water conservation goals, all with a technology that is probably in your pocket right now. After car keys and wallets, mobile phones are the next most-critical item that people must have before they leave their homes. Although the sounds of blaring ring tones are often a nuisance, mobile technologies are changing the way people approach everyday responsibilities, even conserving water. 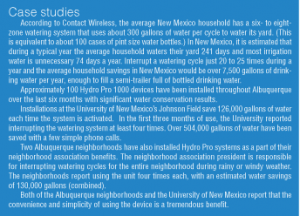 The firm developed a remote access irrigation control system representative of several technologies that together can help solve New Mexico’s water woes. The unit is comprised of a simple paging receiver board and a logic board that, via numeric commands, controls any make or model of irrigation timer. With one phone call and the entry of a seven-digit code, the device provides a simple, quick method to turn off or delay one, 10, hundreds or even thousands of sprinkler systems when watering is unnecessary or ineffective, such as during rainstorms or windy conditions.

Paging has long been the foundation of simple, reliable and inexpensive communication. Digital messages can be sent over existing networks throughout the country and the wireless coverage is generally superior to competing technologies. The paging receiver board used in New Mexico is characteristic of a very basic numeric pager. The board consists of an antenna and a frequency-specific crystal that enables the board to selectively accept only data on its unique channel. In addition to the paging board, there is miscellaneous circuitry, which allows incoming information to be passed to the logic board. Dual-tone or multi-frequency tones can be sent from any telephone, even cellular phones, and converted to a digital Post Office Code Standardization Advisory Group signal at the paging switch. The digital signal is then sent via satellite to multiple terrestrial-based transmitters located near the device. 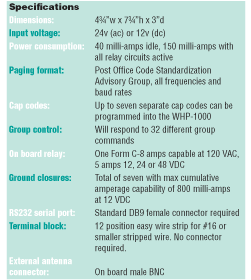 The logic board is designed to decode the incoming digital message and to determine if the message is designated for that particular device. Once identified, the circuit deciphers the numeric code and determines the command that will be activated on the logic board. The logic board is designed to interrupt the irrigation system’s common power lead on any make and model of irrigation timer unit. The activation of the unit closes the water valve by turning its power supply off. The unit has the ability to interrupt an irrigation timer from one second up to 99 days in increments of one second. A command to permanently turn the sprinkler timer off and then back on is also available.

The segregation and grouping options make the device easy to adapt to every irrigation control need. Each unit can participate in up to 32 separate groups and each group can have an unlimited number of units as members. Additional phone numbers can be used to make unlimited combinations of devices and groups.

The new device is available for prices ranging from $100 to $350 per unit, depending on the quantity produced in a single manufacturing run. It is inexpensive to operate, about $2 per month, but the implications for water waste reduction are considerable. It is designed to operate on a commercial 900 MHz wireless network. By using an established commercial one-way wireless network, the expense of operating the units is drastically reduced compared to the more expensive satellite systems available. The coverage and penetration of the firm’s networks throughout the country allows users to control their sprinklers remotely.

“This has the potential to have an enormous economic impact,” Word said. “The system will greatly affect the way New Mexico approaches water conservation for years to come.” New Mexico’s water crisis is not unique and even in areas where water is plentiful everyone could stand to exercise responsible water use. Implementing such systems around the country and abroad could change the way people think about the efficacy of mobile technologies and in doing so, conserve water resources for future generations.

About the author
Laura Drangmeister works with Contact Wireless marketing the Hydro Pro 1000. She can be reached at (505) 888-5877 or email: [email protected].