Situation/problem
Keeping water cooler equipment clean is a challenge around the globe. In many countries, maintaining water cooler cleanliness is the responsibility of the water consumer. However, in both Europe and in the United States, companies that sell water typically own the coolers placed in businesses, hospitals, schools and public places. Since these suppliers are generally in charge of water cooler maintenance, the quality and cleanliness of water coolers and the water contained within them are their responsibility. Because of this, water cooler providers must maintain high levels of cleanliness for their customers in order to ensure that the quality of the water they supply is consistently clean and great tasting.

The water cooler industry has made numerous advancements in water processing and delivery systems in recent years that have greatly improved the quality of drinking water, ensuring consistent flavor and good water quality. Many of these advances have been mechanical in nature, minimizing contact between the water and the environment to reduce the risk of contamination. Despite these advancements, bacteria and biofilm formation in water coolers remains a problem. Because it can affect water appearance and taste, finding a method to reduce bacterial contamination remains a top priority for water cooler manufacturers.

Bacteria can enter the cooler as part of the natural microbial flora in the water, or can be inadvertently added when bottles and equipment are touched by users. Because of this, biofilm formation is a continual problem. Biofilm is a thin layer of bacteria that forms on surfaces exposed to water. It develops when bacteria attach to a surface and begin to form a microcolony, which eventually develops into a coating. Biofilm does not automatically affect the quality of water, but as it builds up on the surface, bacteria can slough off into the water and cause contamination. Biofilm can also have negative effects on the taste, odor and appearance of the water.

Researchers at the Uni-Institut for Environmental Medicine and Hospital Hygiene in Freiburg, Germany conducted a study of 20 water coolers found in bookstores, medical offices, drugstores and supermarkets throughout Germany in 2004. Contaminated water was found in nearly all of the coolers tested. More than half of them contained water with microbe levels 20 times higher than the levels recommended as safe by the European Bottled Watercooler Association (EBWA), the authoritative source for all information concerning the European water cooler industry.

To ensure reliable quality of dispensed water, the EBWA recommends that owners sanitize their coolers at least once each quarter. To comply with the EBWA regulations, a technician cleans the water coolers with chemicals strong enough to kill bacteria and break up the biofilm that develops from bacterial growth. But the process is time consuming and expensive. The labor associated with this cleaning cycle is the most expensive element—costing anywhere from $50 to $70 a visit, four times each year. Considering that the average cost of a water cooler is just over $100, it is evident that quarterly cleanings are not an economical solution. In addition, the cost of these quarterly cleanings can negate the cost savings potential of water coolers over bottled water.

Furthermore, these quarterly cleanings are effective for only a short period of time. According to a study conducted by the University of Albany, State University of New York, bacteria begin to grow and a biofilm develops only one week after a typical water cooler disinfection treatment. During the time between quarterly cleanings, the bacteria continue to grow and the water in the cooler becomes less and less clean resulting in drinking water with unpleasant appearance, taste or odor.

Finally, cleaning solutions themselves can add unwanted chemicals to the water reservoir. While technicians are meticulous in their job, concerns remain that improperly used cleaning chemicals can impart unwanted tastes and odors to the water.

Solution
In an effort to combat the cleanliness issues associated with water coolers, a leading international manufacturer of water coolers developed a self-cleaning water cooler technology. Seeking a natural solution, they evaluated companies that offered silver-based antimicrobials. Silver has long been recognized as a way to prevent microbial contamination of drinking water. The Egyptians lined water cisterns with silver to combat microbes and the U.S. National Aeronautics and Space Administration (NASA) used silver to purify water on its spacecrafts in the 1960s.

Evaluation of available products led them to an American manufacturer of a silver-based antimicrobial compound. They selected the firm because it was the only company that had experience in developing antimicrobial products that were used in direct contact with drinking water, including working with a variety of manufacturers to develop water tubing, faucet aerators, water filters and other water-related components. They had the capacity to help determine the type of product needed to meet the high demand of water contact, engineer the solution, make trial runs of the technology in its pilot plant and test for effectiveness on key bacteria.

The silver-based compound is comprised of naturally occurring silver ions and a ceramic material called a zeolite. It provides safe, long-lasting and continuous protection against microbes by releasing silver ions to the surface at a slow and steady rate. The compound has been proven effective against a broad range of microorganisms, including bacteria, algae and fungus such as mold and yeast. Initial laboratory tests show the compound may also fight viruses.

This antimicrobial silver compound was incorporated into polymeric water cooler components—the entire inner water path, including the no-spill system, reservoir, water separator and tubing—of a current product line. All plastic parts in direct contact with water were treated, since bacterial contamination can occur if any component is unprotected.

In Europe, the silver-compound treated water cooler components are marketed as Self-Sanitizing Technology (SST). They are designed to inhibit bacteria throughout the distance traveled by the water inside the cooler for a time period of one year. The SST technology maintains a hygienic surface even in coolers used only occasionally, where water remains in the reservoir for extended periods of time. When it is time to install new components, customers can easily remove and replace them without the assistance of a technician.

Benefits of choosing silver
There are economic as well as cleanliness advantages to using this technology in water coolers. The silver-based antimicrobial solution combats the growth of bacteria, thus inhibiting the formation of biofilm. (See Figure 1). 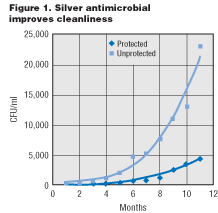 This results in cleaner and better tasting water over the entire one-year period of use. By eliminating the need for quarterly cleanings, costs were significantly reduced: the added cost of the antimicrobial technology is a fraction of the cost of one single quarterly cleaning. It is estimated that the payback on an SST cooler is approximately three months.

Results
Extensive laboratory and field tests conducted by the manufacturer on its silver-treated SST water coolers have been remarkably successful. In 2003, laboratory tests on a statistically significant sample of SST coolers over a 12-month period were conducted. The coolers were placed in settings replicating real-life usage patterns, dispensing water several times a day. The water samples were analyzed weekly. The results confirmed a significant decrease in bacteria in the SST coolers.

After 12 months of actual use, these coolers met the EBWA’s rigorous standard for freshly sanitized coolers even without a single cleaning. Swabs of coolers tested by an approved Italian laboratory were found to have less than 500 CFU/cm2, a level that receives a rating of ‘good’ on the EBWA water cooler bacteria count scale. In other words, the Self Sanitizing Technology used in Europe produced equivalent hygiene to a cooler that had been freshly cleaned with chemical sanitizers (See Figure 2). 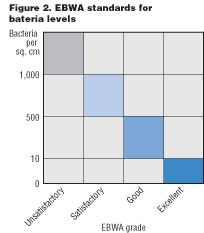 The silver release level (into the drinking water) from the cooler was measured to be slightly above the detection limits using the most sensitive techniques—averaging in the single digit ppb range. The EPA recently revised the maximum level of silver from 50 ppb to 100 ppb in light of their finding of no non-cosmetic health effects related to silver.

Based on these proven results, the company has launched the SST technology in water coolers in North America. Customers can expect to benefit from improved hygiene, reduced need for chemical cleanings, cost savings, effective resistance to biofilm formation and, most importantly, water that tastes great.

About the author
Brian McBride leads AgION Technologies Inc.’s Water Applications team, which develops solutions to meet microbial challenges for a wide range of customers in the filtration, water and beverage dispensing, water storage and foodservice industries. Brian also acts as AgION’s liaison to leading organizations such as Water Quality Association (WQA), International Bottled Water Association (IBWA) and other related associations. Prior to joining AgION, Brian worked as a lab chemist within Rohm and Haas’ Water Treatment Group. He received a BS in Chemistry from Bates College and an MBA from Babson College.

About Cosmetal
The water cooler technology discussed above is the Avant product line from Cosmetal. For more than 30 years, Cosmetal has delivered products that address the varied needs of its global customers. Upon investigating self-cleaning cooler technology, the company settled on silver because of the their commitment to natural technologies. With success in the European markets, the Avant series with silver technology is now being offered in the United States. For more information about Cosmetal water coolers, visit http://www.cosmetal.it/en_prod_connect.htm