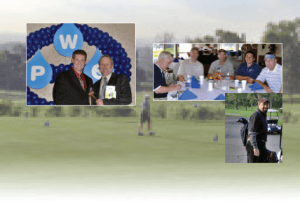 The 48th annual convention of the Pacific Water Quality Association brought dealers and manufacturers together in Riverside, Calif., at the beginning of November. The trade show and educational sessions were held at the city’s convention center; attendees were lodged at the historic Mission Inn. The gathering was an unprecedented success—the largest western regional water quality show ever held!

Kicking off the event, Joe Harrison led a WQA Fundamentals course so those seeking certification might score well on their exam. PWQA’s Executive and General Boards of Directors held meetings on Tuesday, wrapping up old business and introducing new members to their compatriots: Marty Jessen of Rayne Corporation, Dennis Falsken of Falsken Water Systems and Todd Galloway of Culligan all take Board seats this year. Terry Heckman of GE Infrastructure Water & Process Technologies joins the Executive Board as Vice President; while I’ll lend my expertise as the new Secretary/Treasurer, filling out incoming President Mike Mecca’s cabinet along with immediate Past President Mark Howlett of Culligan.

Wednesday morning, nearly four dozen golfers hit the links at Jurupa Hills Country Club. Despite the lure of a $10,000 prize, no one managed the hole in one, but there were notable accomplishments nonetheless. Plaques and statuettes were awarded to the day’s top performers. Pat Dalee, Brian Good, Frank DeSilva and Chris Moore were the feted fearsome foursome, while Linda Avignon had the longest drive of the day. A robust luncheon at the clubhouse was enjoyed by all. Ron Ruef got Kevin Pihl in trouble, John Foley made the closest-to-the-hole shot of the day but had to change shirts in the process (damn those olives!) and a good time was had by all.

At the convention center later that afternoon, the General Session was held at which the new officer would officially

take the helm of the organization. Mark and Sandy Howlett’s sons Micah and Morgan opened the meeting with a special color guard ceremony, aided by other members of Boy Scout Troop 161 of Temple City, Calif. Micah then sang a moving rendition of “God Bless America.”

WQA President Gerry Dierolf, the scheduled keynote speaker, was unfortunately unable to attend the event as planned. Martha Davis of the Inland Empire Utility Agency graciously agreed to substitute. Davis headed the Salinity Reduction Study for the agency and shared her experiences on the project. “We’ve learned that people like their softeners,” she noted, which drew applause from the crowd, adding that the study is an inquiry to find a better understanding of a complicated problem. “The increasing dependency on groundwater means salt management is the big issue for the entire Western U.S., not just California,” she said.

“You want to be successful, a water softener in every home,” Davis continued, “But if you are, you could be part of the tipping point in this issue.”

Davis explained that there is no single sector being looked at as a solution to rising salinity. “Every additional milligram now will effect our ability to reuse this water 150 years from now.” 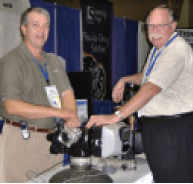 After a parting address by Howlett, the gavel was passed to Mike Mecca, who used it to mark the opening of his first address as PWQA President. Ron Ruef, this year’s event chairperson, gave an overview of all that awaited participants—beginning with a welcome reception immediately after the general session. Sid Fly entertained to the delight of all.

The Past Presidents met for breakfast on Thursday morning at the Mission Inn; then Frank DeSilva, ResinTech’s National Sales Manager, kicked off the educational sessions at the convention center with a rousing presentation on the removal of unusual contaminants—complete with bells and candy for the participants.

With the World Health Organization’s continuing look at tap water as a potential source of nutrition (see WC&P’s March 2005 issue), the ‘hot ticket’ session was presented by Susan Feldman of the Salt Institute, who looked at that issue in light of newly released studies. Feldman will be preparing an exclusive look articles for WC&P readers in an upcoming issue. Mike Mecca (on softeners and corrosion) and Mike Keller (on iron removal) presented in succession, ending the morning as the trade show opened its doors. Lunch was served on the show floor itself so there was no reason for anyone to leave the exhibits even for a moment—the ‘sticky floor’ concept being key for exhibitors today in many venues. 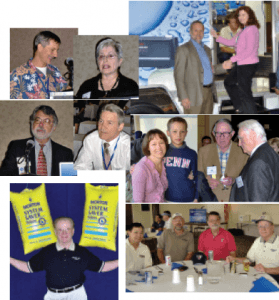 And thanks to access of this particular venue, the Pentair truck, outfitted with tanks from one end to the other, was able to drive right onto the show floor. Don’t miss this rolling exhibit when it visits your area—it’s wonderful!

Afternoon educational sessions included the duo of Robert Slovak and David Carlile (aided by lots of hardware) expounding on proper RO installation and maintainance, and Susan Bennett explaining California’s three-day right of recision and what it means to water treatment professionals.

Thursday evening a gala banquet began with Sid Fly once again entertaining the crowd, this time with an assortment of original songs. PWQA annually recognizes individuals who have made unique contributions to the water treatment industry and this year was no exception. Mark Howlett, Tracy Strahl, Linda Thomson and Craig Bybee received the Man of the Year, Hall of Fame, Marino Pomares and Special Service Awards (respectively). In addition, service awards were given to the four dealers who have participated in the Inland Empire Utility Agency salinity reduction study: Dennis Falsken (Falsken Water Systems), George Mondragon (EcoWater of Corona), Jim McLaughlin (Culligan of Ontario) and Jon Pomeroy (Rayne of Covina).

As dinner drew to a close and guests enjoyed coffee and dessert, auctioneer Jon Pomeroy took the microphone and once again conducted an auction of donated merchandise and services aided by his able assistant, Vanna. Many asked for the name of Vanna’s couturier, as her dress this year surpassed all expections! Over $6,000 was raised for the organization thanks to the generosity of the members. A Christmas cruise on the Performance Water flagship and cases of alcoholic libations were the most popular items; but in fact there was something for every taste and pocketbook in the evening’s offerings. 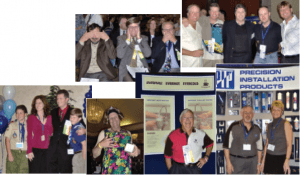 Anne Parissidi proctored WQA certification exams on Friday morning while Mark Howlett, Chris Layton, Carlyn Meyer and Tracy Strahl presented a California salinity update in panel format. The close of the trade show at noon finished the event. While final numbers are not available as we go to press, exhibit space was a sell-out, attendance was up over last year, and plans are already in the works for the 2006 show on the Queen Mary—see you there!