Although floodwaters have largely receded in the Gulf Coast region impacted by Hurricanes Katrina and Rita, the public health threat is far from over because the effects of tainted water extend far beyond the tap. A wide range of chemical, biological and physical contaminants continue to adversely impact the environment and local residents as they return and rebuild.

Toxic soup
Following a natural disaster, the risk of exposure to toxic substances must be considered from every primary exposure route including food, water, air, soil and contact surfaces. Hazards include contact with human and animal wastes, industrial or hospital wastes, petroleum and pesticide products and natural environmental pollutants, all of which may be present simultaneously in storm water runoff.

Protected by organic matter and aided by increased moisture, environmental contaminants may increase in concentration and be present for weeks to months without targeted clean-up efforts. The following is a list of environments that are expected to be impacted by floodwaters and need to be targeted for minimizing unhealthy exposures:

Insect vectors
As of October 4, 2005, 81 and 51 cases of West Nile virus (carried by mosquitos) have been reported this year in Louisiana and Mississippi, respectively. Flooded regions are prime breeding grounds for mosquitoes. Covering exposed skin or using DEET repellants (heed warning labels) are effective controls as is eliminating standing water outside the home.

Food safety
All foods that came into contact with floodwaters should be discarded as should any perishables that were left unrefrigerated for more than two hours. Canned goods may be salvageable if they appear normal, but labels should be discarded and the exterior of the cans rinsed in a diluted bleach solution (~¼ cup bleach per gallon of water). Sanitization of food preparation areas, and any utensils that will be in contact with food, is necessary to prevent cross-contamination.

Personal hygiene and sanitation
Hands should be washed frequently and particularly before meals, requiring access to quality water for handwashing and bathing. Hard surfaces (i.e., linoleum floors, countertops) and other nonporous objects (personal belongings, children’s toys) should also be thoroughly disinfected with dilute household bleach. A 10-minute contact time is recommended. Cloth items (linens, clothing) should be laundered in hot water or with bleach (¾ cup per load) and thoroughly dried. Items that cannot be laundered and disinfected should be destroyed (mattresses, stuffed animals, pillows, books, etc.).

Drinking water
In the U.S., municipal drinking water is monitored for microbial indicators and chemicals that indicate potential breaches in treatment efficacy, but private supplies may not be routinely monitored. Unknown damage to distribution system infrastructure, cross-connections or home plumbing might provide an entry route for contaminants into treated water and might remain undetected. Private wells should be tested and disinfected before use following a natural disaster.

Local authorities have the responsibility to inform customers if tap water is suspected to be tainted and will typically issue a boil water alert if water quality is in question. Until the quality of the drinking water supply is certain, drinking water may be temporarily treated by:

A variety of chemical contaminants can impact water supplies following a flooding event. Water that smells like fuel or has a chemical odor should not be consumed. One can not rely solely on the ‘smell test’ as many contaminants have no taste, odor or smell despite being present at harmful concentrations. Where chemical and microbial contaminants coexist, a multistage point of use (POU) treatment system, rated for specific classes of contaminants is necessary for total water purification.

Indoor air quality
Although a natural component of the outdoor environment, mold is a problem pollutant indoors. The most common indoor molds, (Cladosporium and Penicillium), primarily cause symptoms of allergy and asthma in susceptible individuals. Some molds, such as Stachybotrys, can produce toxis associated with neurological effects. Threshold levels are unknown and depend on the type of mold present and individual susceptibilities. Health complaints have been reported from 2,000 CFU/m3 of mixed mold populations in air samples. Mold can proliferate in less than 72 hours in damp, warm environments, thus contaminated porous surfaces and items must be removed and discarded (gypsum board, carpeting, padding, etc.). Indoor environments must be completely dried. Natural ventilation as well as the use of fans and dehumidifiers will help to return to a healthy indoor relative humidity of less than 40 percent. Air purification systems, with ultraviolet light technology or HEPA filters, are also effective for reducing various indoor pollutants.

Additional hazards
Other potential hazards resultant from the hurricanes are due to responsive alterations in behavior. For example, to temporarily replace damaged or broken appliances or to circumvent power outages, there may be an increase in the use of gas or charcoal-powered generators or stoves. These and other gas-powered pumps, pressure washers or other tools should never be used indoors or outdoors near an open window. Improper use of these and other combustion products can result in exposure to harmful air pollutants, such as carbon monoxide and nitrogen dioxide, both colorless, odorless gases that may be deadly.

Rescue from remediation
The process of cleaning up after a disaster is often best left to professionals. Although wearing personal protective gear (rubber boots and gloves, goggles, etc.) will help reduce exposures, vulnerable populations should solicit the help of remediation companies or healthy family members and friends. More than 20 percent of the general population in the U.S. are considered immunocompro-mised and are known to be 10-100 times more likely to suffer from illness or death associated with microbial infections. Most at risk are the elderly, young children, pregnant women and those undergoing immunosuppressive treatments or suffering from chronic illnesses (AIDS patients).

Exposure to mold spores during remediation can be 10-1,000 times higher than original background levels, requiring the need for the highest quality (HEPA) respirators while performing clean-up. Due to the potential risk associated with re-aerosolization of mold pathogens and the potential for potent toxins to be released into the ambient air, it is advised that professional remedia-tion teams clean up all but the smallest mold contamination problems. 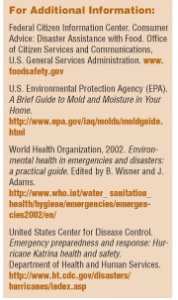 Conclusion
Floodwaters contain a mixture of contaminants from overflowing sewage systems and agricultural or industrial wastes and are generally assumed to be plagued with microbial pathogens and chemical toxins. Therefore, anything that has been in contact with floodwaters needs to be cleaned and sanitized. Maintaining an environment safe from microbial contamination involves an all-around approach aimed at air or water purification, surface disinfection, mold removal and proper hygiene and sanitation. The availability of safe drinking water and food supplies are vital first steps when considering rehabitation of a previously contaminated environment. Technologies available in certain POU drinking water treatment devices offer peace of mind to residents of the Gulf region as they continue to reclaim their homes and communities.