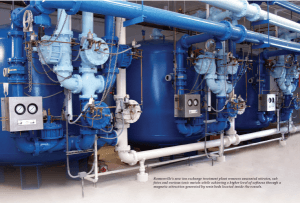 The first of several planned ion exchange plants in Romeoville, Ill. began operation this month to improve water quality by lowering existing levels of radium in the drinking water to readings below what is required by the latest U.S. Environmental Protection Agency (U.S. EPA) standards.

Background
The Village of Romeoville, located 30 minutes southwest of Chicago, draws its water from an underground supply consisting of five deep wells that pump approximately 1,000 feet below the surface and seven shallow wells pumping 80-100 feet below the surface. Each day, Romeo-ville pumps over 3.8 million gallons of water to over 50,000 residents of the village and the neighboring unincorporated areas, which amounts to over 1.4 billion gallons a year.

Romeoville periodically tests the water in accordance with U.S. EPA regulations. The purpose of the testing is to determine the water quality and composition. Periodic testing revealed two naturally occurring deposits known as Radium 226 and 228 in the aquifer which exceeded the Illinois EPA’s new maximum level of five picocuries per liter or pc/L.

The radium level average in 2004, according to Romeoville’s water quality report, ranged from 1.8 pc/L to 7.2 pc/L. That moved Village Mayor Fred Dewald and six trustees to approve resolution 04-0182 authorizing an engineering firm (Strand and Associates) to proceed with the design and engineering of three ion exchange plants to reduce the naturally occurring radium levels in the water with the added benefit of improving the aesthetics, or softness, of the water. Additional ion exchange plants will open in the future, with up to five plants in all at project completion.

The ion exchange system
Strand and Associates chose Romeoville-based Metropolitan Industries to supply and integrate all necessary equipment required for the new plants’ operation. They provided three new ion exchange treatment vessels, over 20 control valves and a computer control system. All were incorporated into the existing wellhouse/reservoir and booster pumping station. The new system was installed by Great Midwest Contracting and integrated into Romeoville’s recently upgraded supervisory control and date acquisition system, which allows water operators to precisely control and monitor the plant from distant locations via cellular communications and Internet technology. 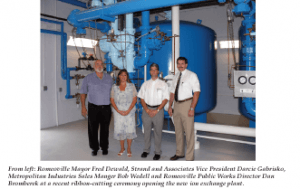 Village resolve
Radium occurs naturally in trace amounts in rocks, soils and groundwater. This energy is part of the natural elements to which all living creatures are exposed. As radium naturally breaks down, it sometimes enters the water supply. This is an issue the Village of Romeoville takes seriously and is determined to successfully address.

“The citizens of Romeoville deserve the highest quality of drinking water,” stated Mayor Dewald, “I made it a priority for this administration to make these improvements, regardless of political obstacles.”

“We cannot control the hand that Mother Nature deals in terms of water quality but we can play the cards we are dealt and improve the quality through technology,” he summed up.

Radium reduction
Two practical ways to reduce radium are ion exchange and chemical precipitation. Chemical precipitation is a complex process of combining chemical addition to raise the pH level with clarification by gravity settling, recarbonation or acid addition for pH stabilization and filtration. Ion exchange, on the other hand, only requires an in-line pressure system with regeneration capability, making it a practical choice for many municipalities. Metropolitan Industries simplified the process further by providing all components needed, reducing the confusion often involved during complex projects. 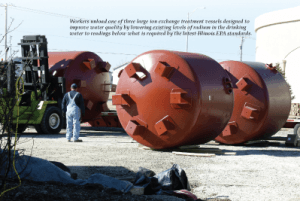 Ion exchange systems are typically an industrial-sized water softener but can also remove nitrates, sulfates and various toxic metals from water during the softening process through a magnetic attraction (ion exchange). Ions are atoms, small particles that are the building blocks for molecules. When contaminated water passes through the ion exchange unit, negative ions of the contaminated water are attracted by the positive charge to the ions in the resin bed. This magnetic attraction from the resin beds holds the unwanted radium ions from the water as it passes over the beds. In the end, the radium ions are removed from the water while achieving a higher level of softness. The process is similar to many of the new air purifiers on the market that use ion technology.

“Once the system is on-line, it will reduce the radium levels well below the maximum allowable level of 5.0 pc/L as mandated by the Illinois EPA,” says Metropolitan Industries Project Manager Keith Girup.

The Illinois EPA mandates that all water providers must comply with their maximum contaminant level of 5.0 pc/L by 2006. Although this is a significant investment for most villages and municipalities, there is added benefit for water customers in that the ion exchange process softens hard water proportionally with the reduction of radium. This has Romeoville water customers pleased about the quality of their water service.

Romeoville resident Myrna Mer-cado, who lives just down the street from the new ion exchange plant, looks forward to its operation. “My only complaint about living in Romeoville is the hard water, which does awful things to my hair. The new system will soften the water and eliminate any contaminants. It is nice to live in a place that cares about its residents and takes action to resolve problems,” Mercado said.

The new ion exchange system is expected to draw rave reviews from Romeoville residents once it is on-line this month.

About the author
Joseph Sanchez is the Director of Public Relations at Metropolitan Industries, Inc. located in Romeoville, Ill. He recently returned from a 12-month tour in Mosul, Iraq as a member of the Illinois Army National Guard. At Metropolitan, he strives to educate and inform water and wastewater professionals about advances in technology and applications related to their fields. Write him at jsanchez@metropolitanind.com