You really should have been there!!

EWQA’s conference was the largest in years – in fact, vendors literally streamed out into the corridors.

The EWQA board succeeded once again in getting government representatives to come and speak directly with the membership on the vital issues that affect each and every water treatment professional. You really should have been there! Those who were had the opportunity to meet with representatives of Pennsylvania’s DEP and ask why no one had received their small system operator certification despite taking (and passing) the exam months ago.

Folks made their way down to the lecture room and asked Penn. DEP’s Foster Diodato about the delays. “We haven’t issued a single certification this year,” he stated flatly. “There’s a huge backlog of people who passed the test. That was going to be done by three women in the department…but they retired.”

Surprising? You bet! You really should have been there!
Diodato admitted the retirements were not un-anticipated, but apparently the agency was unable to synchronize new hires in an efficient fashion. He said that replacements had finally been authorized. New staff will hopefully be in place this month and can begin issuing the long-awaited certifications shortly thereafter.

EWQA’s newest board member, Randy Eddinger, managed to obtain his certification at the end of 2004 by becoming a permanent thorn in the side of the agency. He successfully lobbied DEP for the creation of a registry of certified small systems operators, so when someone contacts the state seeking a qualified individual, they receive a list of everyone in their area who have received certification. 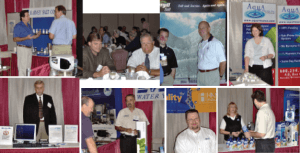 State offers on-line training for small systems operators
Despite the agency’s failure to certify timely, there was some good news in the session. The on-line education/training program—DEP’s EarthWise Academy—is up and running. Penn. DEP’s Barry Greenawald gave the audience an overview of the development of the new program. Pennsylvania has opted to test individual technological expertise rather than overall applicant knowledge. That choice was made after researching a number of factors. Only nine percent of applicants passed the American Board of Certification (ABC) small systems operator test, which consisted of 100 questions. Penn. DEP asked 8,000 operators what was wrong with that test and most noted it was too wastewater-centric when in fact, these are largely potable water systems in Pennsylvania. “We listened to the regulatory community and to water quality professionals,” Greenawald explained, “and the consensus was that a technology-based approach to testing was the better way to go.”

That meant a longer development process, since each individual technology requires separate study and examination. Ultimately, psychometrics experts were brought in and they culled the best from the ABC questions (a total universe of 6,000) resulting in a pool of 2,000 questions. Those were vetted for each technology, honing them further. Then 1,000 volunteers took evolving tests over a period of one and a half years, each time being extensively questioned on the process and the content so the exam could evolve further and truly become an accurate, comprehensive means of certifying potable water professionals for small systems operations throughout the Keystone State.

The results are dramatic. Whereas 91 percent failed the old ABC test, now the passing rates on drinking water technologies are 65-70 percent, with 90 percent passing overall when the test scores of all technologies are averaged.

New procedures and fees
To begin, visit the website www.ahs.dep.state.pa.us/edu and click “Search continuing ed course catalog”. You’ll find easy-to-follow instructions about all the courses EarthWise Academy offers and all the training sponsors approved by Penn. DEP for water and wastewater operator pre-certification and continuing education. President Mike Urbans announced EWQA’s intent to become an approved source of both training and testing. That aspect has also been re-vamped for the better. The state formerly outsourced testing to an independent contractor. Exams were only given twice a year in six cities, never above U.S. Route 80, never in Erie, at a cost of $225 for each test. Now, DEP will approve examiner/providers like the EWQA instead. DEP staff will proctor the actual exam and the testing entity can charge a fee to applicants who wish to be tested, which is roughly $25 per person—saving the state hundreds of thousands of dollars and providing a new source of revenue to approved examiner/providers. AWWA is giving 10 tests a year and rural water groups throughout the state are also taking advantage of the opportunity. “Last week, 59 people came to be tested in Lawrenceville,” Diodato noted, adding that it is by bringing the opportunity for certification to previously unserved areas that the necessary professionals can be reached.

Another change is the elimination of billing for the tests until an applicant passes. There is no limit on the process—one may take the test as often as necessary. The State’s fee of $20 per test will be back-charged when certification has been earned and not before.

In all, there are 46 separate training modules, each requiring from three to five hours of study. Penn. DEP is talking with community colleges now about offering the material as accredited courses. Right now, the state’s certified small systems operators earn, on average, approximately $39,000 a year, making it a strong career choice that the colleges wish to support.

Greenawald and Diodato both stated in no uncertain terms that the DEP enforcement agents are not certified and are not in the business of telling water treatment professionals how to operate. “We are barred by law from doing so,” Diodato said, while Greenawald added that to do otherwise, “would create tremendous liability and is expressly forbidden.”

You really, really should have been there! 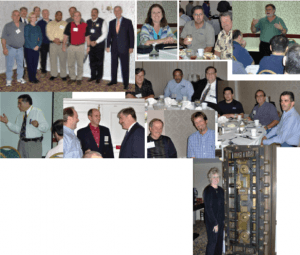 Changes at EWQA
The Board of Directors graciously accepted the resignation of one of EWQA’s longest-serving board members, Bernie Palkow of Duff, who has been a fixture on that governing body for 13 years. A former EWQA president, he plans to continue being an active association member.

Jodi Snyder, Executive Administrator, was pleased to report that 10 new companies joining this year brought total EWQA membership up to 160. This is the second straight year of growth for this regional WQA chapter. While Harrisburg (Penn.) was a pleasant site for last year’s gathering, members had consistently requested a return to the genteel elegance of Scranton’s Radisson Lackawanna Station Hotel and the EWQA board was happy to head back to this odds-on favorite. From the stained glass and marble of the soaring lobby to the walk-in safe turned telephone room, it’s a special place.

This year’s pre-conference marketing workshop was given by industry veteran Carl Davidson. Apparently not used to the reserve of the Eastern crowd, he drew on his show business upbringing to produce smiles throughout the day. “I know you’re not a portrait—I can see you breathing!” he joked at one point.

Davidson offered 300 ideas in the course of the day and suggested that audience members try any three of them consistently for 120 days. He also cautioned the dealers to focus their energies and efforts on actually doing business—not wasting time on the ancillary tasks best delegated to others.

Golf at Stonehedge, with holes sponsored by Aqua Finance, Pentair Water, GE Infrastructure Water and Process Technologies and Alan Mfg., was enjoyed by all who played; ties were the order of the day at every hole—no winners, no losers!

Folk singer Jay Smar delighted everyone at the welcome reception on Wednesday evening and serenaded all at the gala banquet as well.

Seminars of interest
Thursday, concurrent seminars were offered in morning and afternoon sessions, all of which wrapped up so everyone could attend the opening of the trade show. WC&P readers in attendance had the pleasure of hearing Mike Keller’s iron removal course in person (visit our website, www.wcponline.com—his course ran as a three-part series beginning in the February ’05 issue). Jerry Lowry gave a fascinating overview of radionuclides to a standing room only crowd concerned about radioactive substance removal, notably radon, throughout the eastern region. Mike Heatwole, a board member of the Virginia Water Well Association, acquainted attendees with the potential of water treatment opportunities in the agricultural sector. The U.S. Department of Transportation Federal Motor Carrier Safety Administration’s Special Agent Dennis McGee explained why dealers’ trucks are running afoul of federal regulations while Donna Stulir gave an overview of Delaware’s regulations governing drinking water which laid out both the agencies that regulate water in that state and the various programs they offer. You really should have been there!