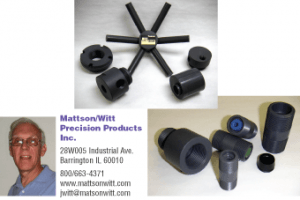 Jeff Witt spent the last three years at Alamo Water Refiners, where the Marmon Water Group sought his expertise. That firm had purchased Matt-Son, Inc.—the family business that created Tough Stuff products—and it was in need of attention. Now, 36 months later, the name has changed to Mattson/Witt Precision Products Inc. and Witt is President and owner.

“It’s been an incredible journey,” Witt muses, adding that it is fabulous to have come to own a company with half a century of manufacturing expertise.

Few people in this or any other industry get hired as a paladin to correct flaws in internal operations, restore controls and shape up procedures—and then have the opportunity to buy the restored, rejuvenated entity they have personally created. Yet that’s precisely what Witt has experienced.

Matt-Son, Inc. was founded in 1957 by Matthew Oleskow, Sr. The company specialized in custom-machined parts for the water treatment industry and enjoyed a well-deserved reputation of excellence. Robert (Bob) Oleskow, the founder’s son, sold the firm to Marmon in 1998. Ultimately, Marmon also acquired Alamo; then merged the two companies to enhance both. This created a dual entity that both manufactured and distributed products nationally.

Adapting to that new configuration was not without difficulty and it was to resolve those difficulties that Marmon hired Witt. “We never really suffered in terms of quality, but internally the controls just weren’t there and we were suffering for it,” Witt said. He got it organized, turning around the internal practices and procedures so that the machining expertise of the company could operate at full advantage. Last Autumn, Marmon decided to sell Alamo and Witt let it be known that he was interested in the machining business part—the old Matt-Son business. Marmon agreed, selling the Matt-Son portion to Witt and the rest of Alamo to Watts Industries at the same time.

Witt knew the value of the Matt-Son reputation first hand and began by naming the new entity to reflect that proud heritage. “Removing the hyphen and melding it with my own name, we became Mattson/Witt Precision Products, Inc.,” he explained. The company began operating under that indicia in June of this year.

The focus now is back to the parent company’s roots: machining tank heads, hubs and laterals. Notably, Witt decided to get out of distributing altogether. “We are a purely machining operation once again.”

The staff are experienced employees who began with Matt-Son and continue with Mattson/Witt, several with more than 15 years experience, some with 20. “Around here, I’m the rookie!” Witt jokes.
The aisles and aisles of warehouse racking space required for distribution were no longer needed, which meant they could remain at the Industrial Avenue location (Matt-Son’s original home) and lease out part of the building to another firm.

No longer a distribution competitor, Mattson/Witt Precision Products has quickly become a supplier of choice to many of Alamo’s former OEM clients: Culligan, GE Osmonics, USFilter, Hellen-brand, Helson, Charger and others “Our customer list reads like a Who’s Who of the industry,” Witt noted.

The smooth transition to success has enabled the company to concentrate on new product development, and half a dozen have been created already. The peculiar combination of being a new company with nearly five decades of quality and reputation is certainly an advantage.

While Witt is enjoying the new responsibilities of ownership, the best aspect of his new job to date was the opportunity to go out on sales calls with Bob Oleskow. “Bob called to offer his support and congratulations,“ Witt explained.

Oleskow has been enjoying an active retirement in the years since selling Matt-Son to Marmon Water Group. “Of course, when they bought our competitor (Alamo Water Refineries) and merged Matt-Son into that, I was sad to see it absorbed, but that’s what conglomerates do and life goes on. It was wonderful to learn Jeff decided to buy the company, that he was making the commitment to see Matt-Son flourish again,” Oleskow said.

Phone calls between the two began and one thing led to another…and in no time, the two men, Matt-Son’s former owner and Mattson/Witt Precision Products’ new owner, ended up spending several days visiting customers together. “It was a fabulous experience,” Witt said, adding that many clients were very pleased to learn the company was back, “and many were delighted to see Bob again!”

Oleskow was asked by several of the customers what his interest is in the new company. “Don’t have one, I told them—but I want to see the name rise to success again!”