Introduction
In September 2000, the United Nations General Assembly adopted the Millennium Development Goals (MDG) to promote, “human development as the key to sustaining social and economic progress.”1 One MDG target is to, “halve, by 2015, the proportion of people without sustainable access to safe drinking water (>one billion) and basic sanitation (two billion).”1 The world is on schedule to meet this water supply target;2 however, success in attaining this goal will still leave over 600 million people without access to safe water in 2015.3 Additionally, although the MDG target specifically states the provision of safe drinking water, the metric used to assess the target is provision of water from improved sources, such as boreholes or household connections, because it is difficult and expensive to confirm that water is safe at the household level2. Thus, many more people than estimated may still drink unsafe water, even though it’s from improved sources.


The health consequences of inadequate water and sanitation services include an estimated four billion cases of diarrhea and over two million deaths each year in developing countries, mostly among young children.3


The historical difficulties experienced in providing safe water and sanitation to the world’s population has highlighted the need for novel interventions and effective implementation strategies that increase adoption of technologies by target populations and improve prospects for sustainability. One novel intervention is the Safe Water System (SWS). 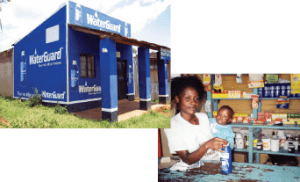 The Safe Water System
Chlorination was first used for disinfection of public water supplies in the early 1900s, and is one factor that contributed to drastic reductions in waterborne disease in cities in the developed world.6 Although small trials of point of use (POU) chlorination had been implemented in the past,7 larger scale trials began in the 1990s, as part of the response of the Pan American Health Organization (PAHO) and the U.S. Centers for Disease Control and Prevention (CDC) to epidemic cholera in Latin America.8 The Safe Water System strategy, devised by CDC and PAHO, includes three elements:

The sodium hypochlorite solution is packaged in a bottle with directions instructing users to add 1/2 or one full bottle cap of the solution to clear water (or double that amount to turbid water) in a standard-sized storage container, agitate and wait 30 minutes before drinking. In four randomized controlled trials, the SWS resulted in reductions in the risk of diarrheal disease ranging from 44 to 84 percent.9, 10, 11, 12 At this concentration, chlorine is effective at inactivating bacteria and some viruses;13 however, it is not effective at inactivating some protozoa, such as cryptosporidium. In one study conducted in Kenya, turbid water treated with the SWS did not exceed WHO guideline values for disinfection by-products (according to unpublished CDC data).

SWS implementation has varied according to local partnerships, as well as social and economic conditions. The disinfectant solution has been disseminated at national and subnational levels in 13 countries through social marketing, in partnership with the non-governmental organization (NGO) Population Services International (PSI). In Ecuador, Laos, Haiti and Nepal, the Ministry of Health or a local NGO implements the SWS program at a community level. In Kabul, Afghanistan, the SWS is provided at no charge to pregnant women receiving antenatal care. The SWS has also been made available free of charge in a number of disaster settings, including Indonesia, India and Myanmar following the 2004 tsunami, and in Kenya, Bolivia, Haiti, Indonesia and Madagascar after other natural disasters. When SWS programs are in place, the ready availability of product greatly facilitates emergency response.

National-scale social marketing of the SWS by PSI 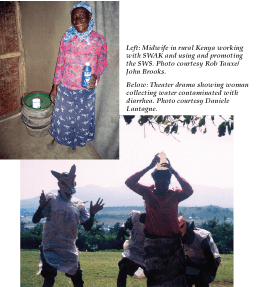 PSI is the largest social marketing NGO in the world, with offices in over 70 countries14. PSI designs a brand name and logo for health products, sells them at a low price, distributes them through wholesale and retail commercial networks and generates demand for the products through behavior change communications, such as radio and TV spots, mobile video units, point-of-sale materials, theater and person-to-person communication. Through early 2005, PSI has sold more than 12 million bottles of solution in 13 countries, leading to over 12 million person-years of treated water. Currently, PSI markets water treatment products in Afghanistan, Burkina Faso, India, Kenya, Madagascar, Malawi, Mozambique, Myanmar, Nigeria, Rwanda, Tanzania, Uzbekistan and Zambia, with plans to launch products in Angola, Burundi, Cameroon, Ethiopia, Nepal and Uganda.

The SWS project in Kenya began in 2000 with a CARE/Kenya pilot project in Nyanza Province. Results from this project showed a 56 percent reduction of diarrheal disease risk in rural SWS users.15 Based on this successful pilot project, PSI/Kenya began marketing an SWS product, a bottle of sodium hypochlorite solution branded as ‘WaterGuard’ in May 2003. Currently, PSI/Kenya sells approximately 50,000 bottles of the solution per month.

As the Kenya project moved from a pilot to national scale, two important lessons were learned. The first was that product design becomes critical as scale-up occurs. The initial CARE bottle was 500 milliliters, with an 8-milliliter cap and one percent sodium hypochlorite solution. The dosing scheme for this bottle was 1/2 cap for 20 liters of clear water and one cap for 20 liters of turbid water, which meant that one bottle had 125 clear-water uses. Assuming one use per day, a bottle lasted a family four months, at a cost per bottle to the users of 45 Kenya shillings ($0.59 U.S.). Upon moving to national-scale distribution, this bottle was found to be unwieldy to transport and too steep a one-time expense for users. Thus, the bottle was redesigned to 150 milliliter with a three-milliliter cap and 1.2 percent solution. The new dosing scheme is one cap for 20 liters of clear water, and two caps for 20 liters of turbid water. Each bottle has 50 clear-water uses and lasts the average family 1.5 months, at a cost to the user of 20 Kenya Shillings ($0.26 U.S.). This redesign has led to a more easily transported, easier-to-use and more affordable product.

The second important lesson was that every organization has its strengths, and successful programming depends on utilizing each organization’s core capacities. By linking PSI’s capacity to produce, market and distribute product with CARE’s capacity to facilitate community-based behavior change and teach other organizations to implement the intervention, a more successful project has been developed.

Linking the PSI product to other organizations
The locally-produced WaterGuard product is widely available in Kenya, with PSI ensuring quality, supply and continuous distribution of the product. This allows other organizations to focus on community mobilization, behavior change communications and other product adoption techniques. A variety of organizations are working to increase adoption of WaterGuard at the household level. The Society of Women and AIDS in Kenya (SWAK) has linked local women’s community groups with CDC/Kenya and Atlanta Rotary Club resources, CARE training and PSI health products. In the SWAK project, local women’s groups receive micro-finance loans to purchase stocks of health products, including WaterGuard, to sell in their rural communities. The Kenya Ministry of Health supports the use of WaterGuard, and has collaborated with CARE/Kenya and CDC to promote WaterGuard and safe storage containers in hospitals. A curriculum to train nurses to teach patients about WaterGuard and hand hygiene has been implemented. CARE/Kenya has also introduced the SWS and hand hygiene education into 45 schools with support from Coca-Cola/East Africa.

These linked programs have resulted in successful behavior change. An evaluation in 2004 showed that 20 percent of very poor, rural households served by SWAK had detectable chlorine residuals in water stored in the home. An evaluation of the nursing intervention demonstrated that after nurses recommended the use of WaterGuard to clinic patients, 67 percent of patients purchased WaterGuard and had chlorine residual present in their water stored in their homes on an unannounced visit by evaluators two weeks after their clinic visit (unpublished CDC data). A recent evaluation has shown that utilization rates among counseled patients remain at over 60 percent one year later.

Conclusion
The Safe Water System is a proven, low-cost intervention that has the potential to provide safe drinking water to those who will not have access to treated infrastructure water in the near term and thus significantly reduces morbidity due to waterborne diseases and improves the quality of life. The Kenya SWS project is an example of a successful social marketing intervention, creating demand for an affordable product, making it widely available through the commercial sector, and enabling other NGOs to incorporate WaterGuard into their own programming. Household water treatment interventions such as the Safe Water System can play a major role in helping the world achieve the Millennium Development Goal for Water to halve, by 2015, the proportion of people without access to safe water1. To achieve this goal, and to surpass it, will require continued collaboration, research and investment. In the interim, point of use water treatment interventions like the Safe Water System can rapidly reduce the burden of waterborne disease in developing countries.

About the author
Daniele S. Lantagne, PE, works in the Foodborne and Diarrheal Diseases Branch, U.S. Centers for Disease Control and Prevention in Atlanta, Ga. She can be reached at dul4@cdc.gov Rob Quick, MD MPH, is an associate at the Center for Global Safe Water in the Rollins School of Public Health at Emory University in Atlanta. For more information about the CDC Safe Water System, contact the Foodborne and Diarrheal Disease Branch at 1600 Clifton Road NE, Atlanta, GA, 30333, or call (404) 639-0231.