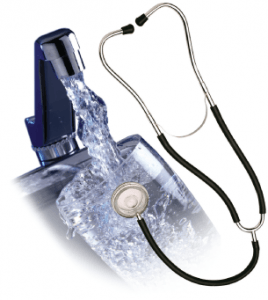 Most of us are fully aware of the need for adequate hydration and for our drinking water to be wholesome. Wholesomeness is defined in the 1998 European Union Drinking Water Directive as, “Free from microorganisms, parasites and substances which, in numbers or concentrations, constitute a potential danger to human health”.1 It also must be aesthetically acceptable in terms of taste, odor, color, suspended solids and temperature, so that we are encouraged to drink sufficiently to sustain optimum hydration and well-being.

However, the concept of drinking water as a vehicle for nutrition may be new to many of us—certainly outside of the fluoridation controversy or the publicity which supports the promotion of bottled mineral water. But the potential health benefit of specific elements in the water supply is a topic that the World Health Organisation (WHO) is currently addressing, with an international symposium scheduled for April 2006. The consequences could have a profound effect on the bottled water and post-treatment industries—as well as, even, the community water suppliers.

Water hardness and heart disease
Over the last 50 years, there have been reports by epidemiologists of a weak but significant increase in the incidence of cardiovascular disease (CVD) in areas where the water supply is naturally soft. Soft water is low in calcium and magnesium, so the inference is that the presence of these elements (in hard water areas) offers some protection against heart disease. Other health consequences, including osteoporosis, were also suggested to be alleviated by hard water.

The precise cause of the relationship has not been established: it is not known whether there is a beneficial effect to  drinking hard water or a negative (toxic) effect of the soft water. Attempts to correlate the incidence of heart disease with specific bulk minerals, such as calcium or magnesium, have proved inconclusive—perhaps not surprisingly—in view of the fact that the major portion of the daily diet for these minerals is satisfied by food intake. The WHO’s latest (third) edition of their Guidelines states “the available data are inadequate to permit a conclusion that the association is causal.”2 The minimum hardness level of 60 milligrams per liter as Ca (150 mg/l as CaCO3) embodied in the 1980 EU Drinking Water Directive has been excluded from the revised 1998 Directive1 (98/83/EC) altogether. Several EU Member States, however, have retained a minimum hardness level—most notably when the water supply is softened at source.

So why is it an issue now?
The WHO was asked, three or four years ago, by their Eastern Mediterranean office to produce Guidance for treating water that has been produced by desalination processes. One of the primary motivations was a consistent method for stabilizing very low TDS water—particularly with respect to corrosive properties. However, the debate then extended to avoiding removal of constituents potentially beneficial to health or possible consideration of their introduction.

In November 2003, the WHO held a workshop in Rome, where 21 international experts convened to review the “nutrient minerals in drinking water and the potential health consequences of long-term consumption of demineralised and remineralised and altered mineral content drinking waters”. They identified and reviewed some 80 reports on the subject and developed a consensus document which was published at the end of 2004 on the WHO website for public comment, along with 14 support papers that were presented at the 2003 Workshop. (These documents are no longer available on the website because the consultation period has ended, but they will be published in a monograph).

The consensus document contained some quite positive recommendations, such as:

One of the papers went so far as to indicate minimum levels of 20 to 30 mg/l for calcium and 10 mg/l for magnesium. But the consensus recommended “that additional studies should be conducted on potential health consequences associated with consumption of both high and low mineral content waters in addition to consideration of water hardness.”

It was stressed that the consensus did not represent a WHO position on the subject, but the WHO position is that there is sufficient evidence to justify further investigation. Epidemiology is an imprecise science in that it sets out to relate incidence of disease to geographical areas. Any association must look for other factors that may ‘confound’ the relationship, such as climate, socio-economic or cultural factors.

Aqua Europa (a federation of European national trade associations representing the water treatment industry) commissioned an evaluation of the WHO Workshop documents by an independent expert epidemiologist3. He concluded that the recommendations exceeded the strength of the data and, furthermore, limitations applied to the data search criteria could have introduced bias. Aqua Europa, the Water Quality Association and the International Council for Bottled Water Associations, amongst others, responded to the report generally expressing concern that the recommendations out-stripped the evidence, recommending and supporting further investigation.

Cause of the association
The association is apparently most positive with respect to magnesium (specifically) rather than water hardness (generally) which poses the question: Can a small contribution to daily intake of calcium or magnesium from drinking water make a difference, especially in high-risk people who do not receive properly mineralized diets? In fact, one of the papers presented at the WHO Workshop reviewed relevant studies published since 1979 and concluded, “There is little evidence that supports an association between water hardness or Ca concentration in DW and CVD. However, the available information from experimental, clinical and epidemiological studies supports the hypothesis that a lower than recommended intake of Mg is a condition that increases the risk of dying from, and possibly developing, CVD, stroke or hypertension.” But it must also be remembered that many hard water supplies do not contain significant amounts of magnesium.

Of the 80 studies identified in the November 2003 WHO Workshop, most, but not all, found an inverse (protective) association between cardiovascular disease mortality and increased water hardness. A few reported the reverse—increased mortality associated with increased hardness. All of the studies conducted relate to the possible effect of naturally hard and naturally soft water on CVD and some USSR and Eastern European studies relate to mineral content of demineralized water.

One of the support papers (Mineral elements related to cardiovascular health) addresses the question: hardness good or softness bad? There is the possibility that, in those instances where an association of CVD with water hardness was found, it may be due, in part at least, to other beneficial trace elements frequently present in hard water (perhaps dolomitic limestone areas). Alternatively, it could be due to adverse trace elements in naturally soft water, either naturally occurring or as corrosion products. A recently published study in Finland suggested that iron and copper in drinking water may be associated with increased risks of heart attack.4

Calcium and, particularly, magnesium levels in drinking water are small in relation to dietary requirements and intake from food, so any significant benefit from water seems surprising. It is hypothesised that some nutrients in drinking water may be more ‘bio-available’ than from foodstuffs. Also, dietary intake of magnesium and calcium in the western world is recognised to be deficient particularly as individuals age, so the marginal contribution from drinking water may, in practice, be significant.

What next?
The proposal of the WHO, following the successful outcome of the international symposium held on the health significance of HPC (bacteria) in drinking water in April 2002, is to hold a similar event on this subject. The symposium, entitled Health Aspects of Calcium and Magnesium in Drinking Water, is scheduled to take place in Baltimore, Maryland, U.S.A. April 24-26, 2006. It is being organized by ILSI (International Life Sciences Institute) and NSF International. The three-day symposium will be followed by a WHO Expert Consultation, which is a ‘closed door’ meeting of experts, essentially independent of industry, who will attempt to produce a consensus report from the symposium. This consensus report will then be provided to WHO for consideration in the Desalination Guidance (2006) and the Guidelines for Drinking Water Quality (2008).

The symposium will address current knowledge on the effects of dietary minerals on health, particularly calcium and magnesium, vulnerable populations and biochemical explanations for those health effects. It will review the contribution of nutrients from water, the epidemiological evidence for associating water nutrients with various health outcomes and look for alternative hypotheses and knowledge gaps. Finally, it will assess the impact of any concluded association on water supply, treatment and economics.

Affect to industry
It is fundamental to the integrity of the industry (post-treatment [POU/POE], bottled water and community water suppliers) and protection of the health of the consumer that WHO Guidelines are embraced and their practical application adopted diligently. But such conclusions must be based on sound data, credible evidence and interpreted in proportion to the evaluated risk, which must also take into account possible health benefits of soft, softened or demineralized water. The purpose of the Symposium and Expert Meeting is to inform those future Guidelines decisions.

The outcome of a conclusion that a positive and significant correlation exists between heart disease and absence of calcium and/or magnesium in drinking water would be, at the very least, a recommendation that these elements should not be removed from drinking water. This would affect the use of reverse osmosis and distillation technologies unless remineralization to the appropriate levels is effected. Softeners would require a blending facility or bypass to the unsoftened water for drinking purposes; whilst a separate tap is a recommendation in the U.K. at present, it is not always practicable from an installation viewpoint.
It might possibly extend to national requirements that these nutrients are added to naturally soft water by the water suppliers before distribution, but the cost to the consumer, of course, would have to be justified against the identified health benefit. An announcement on the five-year revision of the EU Drinking Water Directive is expected shortly and such WHO Guidance would inevitably result in re-inclusion of the minimum hardness parameter.

As with many threats, there is an associated potential opportunity. The opportunity in this instance is to provide products for remineralization of the treated or naturally soft water. However, remineralizing to the anticipated levels for calcium and magnesium in a POU or POE application is not a simple process and, furthermore, existing installations would need consideration. Publicity of the situation would need careful management.

Conclusion
A thorough investigation into the association between heart disease (and other health outcomes) and low levels of calcium and magnesium in the water supply is being conducted by the WHO and an international symposium on the subject is being planned for April 2006. A positive conclusion on the correlation will have a significant effect on the softener, reverse osmosis and distillation market, as well as on bottled water and possibly community water supplies as well. It is essential that industry supports the symposium in order to ensure a transparent and representative outcome and a controlled application of the outcome to industry practices.

About the author
Tony Frost is a director of AQUA FOCUS, LTD., a consultant in water treatment design, supplies and services in Newport, Shropshire, England. He is a past president of Aqua Europa and Chairman of the Bsi Committee, which ‘mirrors’ the CEN/WG13 activities in the United Kingdom. Frost can be contacted at +44 1952 691219 or by email: AquaFocus@aol.com