Introduction
Solar energy can be used to provide electricity for lighting and to power pumps and other equipment, and has been used effectively in developing countries. Case studies of some such uses are presented herein and the use of solar energy to power water purification equipment is discussed.

Background
Solar systems are clean and quiet, and need less maintenance than the diesel generators often used in remote areas where grid electric power is not available. Using non-polluting solar systems in developing countries has value beyond its immediate objective of providing water or power. Thomas B. Johansson, Professor of energy systems analysis, Director of the International Institute for Industrial Environmental Economics (IIIEE) at the University of Lund, Sweden and former Director of the Energy and Atmosphere Programme of the United Nations Development Programme, was quoted in an Associated Press article as saying, “If you try to help (poor countries) develop, and in the process destroy the environment, you haven’t helped them.”

Quentin T. Kelly, Founder, Chairman and Chief Executive Officer of WorldWater & Power, became interested in and concerned about water shortages and their effect on human life during a 1984 trip to Sudan. At that time, there were about 100,000 refugees from Ethiopia in the desert and many were dying from lack of potable water.

Unpolluted groundwater was less than 30 feet below the surface, but no fuel was available to extract it and pumps operated by hand or animals could not provide the volume of water needed for the vast number of people. Believing that there must be a way to harness the power of the sun to operate the pumps, he founded WorldWater & Power that year, working with engineers and scientists from Princeton University.

Since then, the company’s solar systems have helped to solve water and power problems in more than 20 countries. The following are examples of such installations.

Tanzania—The company designed and constructed the first fresh water system for the main slaughterhouse in Dar es Salaam, Tanzania. A series of tanks on the slaughterhouse roof provides storage and water pressure for nighttime and cloudy day use. The local community participated in the construction, instilling a sense of pride and dedication for the project. Another aspect of the project was the design and installation of water points where community residents can purchase clean water, maximizing long-term profits for local community water boards.

Ethiopia—In 1998, the firm shipped a solar water pump to Addis Ababa to demonstrate the technology developed in the U.S., that uses solar power to pump large volumes of water more cost efficiently than other methods. The pump is still in use at the Gefersa Dam water supply facility.

Pakistan—WW&P worked with the Cholistan Development Authority in rural Pakistan, to get emergency relief to people and livestock in the drought-stricken Cholistan Desert by installing AquaMax™ solar-driven pumping systems for irrigation and community use.

Haiti—In the village of Cap Hatien in northern Haiti, the Missionaries of the Poor and their hospital, shelter and rectory are benefitting from solar technology. The missionary brothers are using AquaMax™ to pump water from a 180-foot well into a 51,000-gallon tank that supplies water for more than 1,000 people. The solar array, installed in 1999, is a roof-mounted panel system that runs the pumping system and charges a set of back-up batteries that provide light and power to the mission at night.

The problem of polluted water
In many parts of the developing world throughout Africa, Asia and South America, villagers spend many hours a day hauling water for drinking, cooking, watering livestock, irrigating crops and other needs. In many instances, the accessible surface water is polluted, and the villagers develop chronic debilitating illnesses from drinking it or using it for cooking. In some places, the solution is to dig wells to access deeper, unpolluted groundwater. In other cases, where the only practical water source is polluted surface water, purification is necessary. 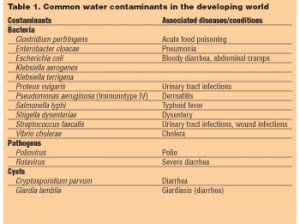 (see Table 1), to provide clean potable water that is free from harmful diseases.

The first stage uses a media filter to remove turbidity and reduce the maximum particle size to ≤ 20 microns. The second stage uses depth cartridge filtration to further remove impurities and reduce particle size to ≤ 5 microns. The third stage uses ultraviolet (UV) sterilization to disrupt the DNA of target organisms, rendering them inactive and benign. The system is run by a 1.5-hp, 230-volt AC, 3-hp pump. The media filter (e.g., sand) and the depth cartridge functions by the force of the pump and they do not require additional power (see Figure 1). 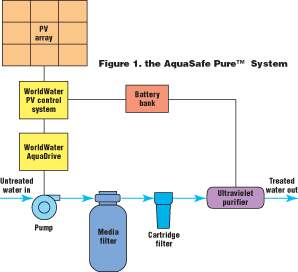 The AquaSafe Pure™ can be installed on a temporary, semi-permanent or permanent basis, and can be operated by solar power, diesel motors, or electricity from the local power grid. When combined with WorldWater’s Mobile MaxPower™ solar-powered mobile unit, the AquaSafe Pure™ can draw surface water from lakes, streams, canals, ponds, rivers, wells or other sources and provides clean water for up to 5,000 people each day with as little as five hours of daily sun exposure.

Portable solar power
Mobile MaxPower™ is a 1.3 kilowatt solar array built onto a 21-foot trailer that will go almost anywhere. The unit feeds electric current directly to equipment that runs on direct current, or through WW&P’s patented AquaMax™ technology to AC pumps that can pump up to 200 gallons of water per minute from any water source, deep or surface.

The unit uses an eight-module array of solar panels, each capable of generating 165 watts of electricity, for a total capacity of 1,320 Watts. The panels are arranged in series to produce 345 volts DC, which is used to drive a standard 2-hp AC pump. A conversion unit is used to switch the solar array to be able to charge a 24-volt DC battery and provide power to the UV water treatment unit. The purification unit can operate for up to ten hours a day on solar power produced by Mobile MaxPower.™

About the author
Dr. Anand Rangarajan, Executive Vice President of WorldWater & Power Corp., has been a solar and water pump specialist for over 20 years. He pioneered the development of proprietary systems and products installed in more than 20 countries, holds patents in solar energy and pumping systems, has published technical papers and has been a featured speaker at national and international conferences. Dr. Rangarajan can be reached at the company’s headquarters: WorldWater & Power Corp., 55 Route 31 South, Pennington Business Park, Bldg. B-1, Pennington, NJ 08534-2513; telephone (609) 818-0700; fax (609) 818-0720; email: anandr@worldwater.com. Or visit the company’s website at www.worldwater.com.