Bottled water sales in Asia and the Middle East rose by 11 percent to reach 51 billion liters in 2004, according to the latest Asia/Middle East Bottled Water report from specialist food and drink consultancy Zenith International. Produced in conjunction with the Asia Bottled Water Association (ABWA), the study shows continuous double figure growth rates, raising consumption per person from 6.7 liters in 1999 to 13.2 liters in 2004.

Total market volume in Asia and the Middle East has more than doubled in the past five years and now represents 32 percent of global consumption, compared with 24 percent in 1999.

“Bottled water fulfills different needs for different parts of the Asia/Middle East region, ranging from the security of pure water from a trusted source to the health benefits associated with proper hydration,” commented Zenith Research Director Gary Roethenbaugh. “The impetus behind bottled water, in terms of growth and long-term opportunity, is immense.”

The profiles of the Asia and Middle East markets offer significant contrasts. Asian countries are often young and emerging, with evolving distribution structures and a rapid influx of new players. The Middle East also has some new emerging opportunities, but is more generally characterized by a mature and well established bottled water industry. 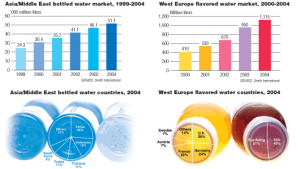 Among the main findings of the 2005 study, Zenith reports that:

A number of issues are identified by Zenith as key to the future. These include: developments in the ongoing acquisition and route to market programs of the major international bottled water players—Nestlé, Danone, Coca-Cola and PepsiCo; the threat of price erosion; the need to uphold quality standards; the impact of unregulated waters on the scope for regulated branded products; the pace of structural change in retailing and the entrenchment of bottled water consumption habits.

As bottled water becomes increasingly accepted across Asia and the Middle East, Zenith predicts that consumption will continue climbing rapidly, to reach 76 billion liters by 2009.

“In terms of future growth, Asia and the Middle East represent an exciting opportunity, with the market expected to rise by over 25 billion liters in the next five years,” Roethenbaugh concluded. “China is the main country to watch as it stretches its lead to an anticipated 28 percent volume share in 2009.”